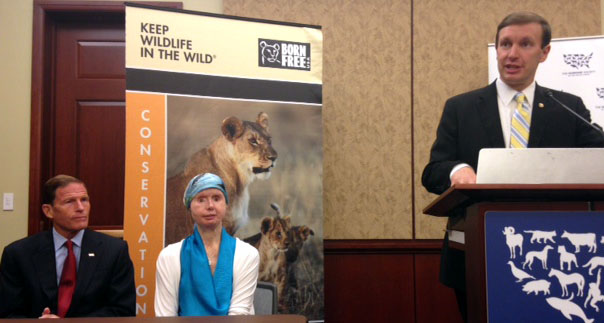 Washington – Charla Nash, horribly mauled by a friend’s pet chimpanzee, stepped on a plane for the first time since the 2009 attack to fly to Washington and become a persuasive advocate for efforts to make it it more difficult for someone to own a monkey as a pet.

“What happened to me must never happen to anyone again,” Nash said at  press conference Thursday  in the U.S. Capitol organized by the Humane Society of the United States.

Animal rights advocates, and Connecticut Sens. Richard Blumenthal and Chris Murphy, want to amend a 100-year old law that bans interstate sales of some wild animals, including lions and tigers, to include sales of non-human primates like the chimp who viciously tore Nash’s face apart and ripped off both her hands.

“They were able to salvage a thumb and put it on sideways,” Nash said at the crowded press conference, one of her rare public appearances.

Nash was given one of the world’s first face transplants and it was a success. But the chimpanzee attack transmitted a disease to her eyes and now she is blind.

Nash said chimpanzees’ feet are as powerful and nimble as their hands. “Imagine four hands holding and beating on you,” she said.

Nash’s trip to Washington was the first journey she has taken on a commercial plane since she was attacked by her friend’s pet.

Travis, the chimp, was purchased in Missouri and transported to Connecticut where a friend of Nash’s in Stamford kept him as a pet. Since Nash’s attack, the state has become one of about 25 that ban the ownership of non-human primates as pets. But Blumenthal said Connecticut “remains vulnerable to primates that may be brought in from other states” and the nation needs a federal law to ban the commerce.

“Wildlife should be kept in the wild,” he said.

Humane Society President Wayne Pacelle said primates like Travis suffer when they are kept as pets. “They are highly intelligent and it is difficult to provide for their needs,” he said.

Additionally, many owners of exotic pets abandon them after a time, leaving the expense of caring for them as “an unfunded mandate on the animal welfare community,” Pacelle said.

Bills similar to the “Captive Primates Safety Act” have passed the House of Representatives before, but were ignored by the Senate. This year, Sens. Barbara Boxer, D-Calif., and David Vitter, R-La., are trying to push the bill through the Senate with the help of co-sponsors like Blumenthal and Murphy, through the Senate.

So is Nash, who spent the day making a round of Capitol Hill offices.

But he cautioned “there will be another Charla Nash if we don’t pass this piece of legislation. It’s just a matter of time before this happens again.”

Before the attack on Nash, Pacelle said some in the Senate objected to the bill as a violation of states’ rights. Others saw it as a “trifling” matter not worthy of support, he said.

A week after Nash’s attack in February of 2009, Jon Stewart, on the Daily Show, ridiculed the House debate on the Captive Primates Safety Act in a spot called “Felonious Monkeys.”

Supporters of the bill say the pain and suffering Nash has experienced since then may change some minds. “I hope [Nash’s] visit provides the final push to get this legislation approved by the end of the year,” said Murphy.

In 2012, Nash received $4 million from the estate of the chimp’s owner. But earlier this year the Connecticut General Assembly denied Nash the ability to sue the state in court to cover additional medical costs.