The folks who want to sell you Connecticut’s next governor 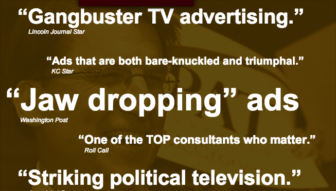 No place for the modest: Foley’s ad man touts his work.

Can the advertising firm that eroded Tom Foley’s support in 2010, increased the Jewish vote for Mitt Romney in 2012 and shaped New Jersey Gov. Chris Christie’s image in 2013 help John P. McKinney defeat Foley for the Republican nomination for governor in 2014?

Is the shop behind the daring ad credited with winning the New York mayoral primary for Bill de Blasio the right choice to burnish the image of Gov. Dannel P. Malloy, a first-term Democrat struggling to hit 50 percent in any key polling metric?

The answers to those questions will come over the next weeks and months as the airwaves are filled with ads aimed at educating and influencing Connecticut voters in what is widely seen as one of the nation’s most competitive races for governor.

The three candidates who can afford television have settled on their advertising gurus, the largely invisible creators of the most visible and most expensive element of the modern campaign: television commercials.

Foley, who lost by inches to Malloy in 2010, is back with the same team: Doug McAuliffe Strategic + Creative. His first ad went up Monday.

Malloy is shaking things up. Gone is SKDKnickerbocker, a New York company that handled the governor’s ads in 2010, not to mention the general election campaign of a freshly minted independent in 2006, U.S. Sen. Joseph I. Lieberman.

The governor’s new ad agency, as reported in his campaign finance filing Thursday, is AKPD Message and Media, the firm founded by David Axelrod, a key media adviser to Barack Obama in his winning campaigns for U.S. Senate in 2004 and president in 2008 and 2012.

Axelrod is gone, but the firm is hot, coming off winning campaigns for mayors in Boston and New York.

In the Big Apple, it generated buzz and votes with the ad, “Dante.” In 30-seconds, a 15-year-old boy with a warm smile and an oversized Afro touted de Blasio as the only Democrat with the guts to break with the policies on Mayor Michael Bloomberg – one issues ranging from taxing the rich to ending the routine stop-and-frisk of black teens.

“And I’d say that even he weren’t my dad,” Dante says at the close.

For many New Yorkers, the tag line was a revelation that de Blasio, struggling to break out of the pack, had a biracial family.

Malloy, who has no primary, paid $37,722 to AKPD on June 30, the same day his campaign paid $41,051 to Global Strategy Group. AKPD is new to the Malloy camp, but Global is not. One of its partners is Roy Occhiogrosso, a strategist for Malloy during his losing primary campaign in 2006 and his win in 2010.

Money is not a short-term problem for the governor. He and Lt. Gov. Nancy Wyman are sitting on more than $6.3 million in cash after recently obtaining $6.5 million in public financing for the general election.

Foley qualified for public financing of $1.35 million for the primary after June 30, the end of the last reporting period. His finance report gives no hint of how much money he is investing in media. It does not report incurring any expenses for the production of the ad that began airing Monday.

His campaign did not respond to requests for an explanation.

Jamestown Associates crafted ads for an independent expenditure group in 2012 to promote Mitt Romney among Jewish voters, but it has a significant record in Connecticut.

In 2006, Jamestown crafted a series of upbeat ads about Rell returning hope and integrity to Connecticut government after scandal.

But it also can hit hard. It made national waves the same year with an ad for Republican Congressman Nancy Johnson that attacked her Democratic opponent, Chris Murphy, as soft in the war on terror.

National pundits picked it as one of the year’s best ads, but the consensus was that it did not play especially well in Connecticut. Murphy, then a state legislator, unseated Johnson in an upset, setting the stage for his election to the U.S. Senate in 2012.

In the 2010 primary for governor, Jamestown produced Fedele ads attacking Foley for the demise of the Bibb Co., a Georgia textile factory, after his company acquired it. Once the ads hit the air, Foley’s lead over Fedele shrank from 35 percentage points to single digits.

The scripts for the Bibb ads are unlikely to be recycled.

McKinney, the state Senate minority leader, says those types of attacks are off limits, but pointing out policy differences and qualifications are fair game.

McKinney’s campaign says his first ad by Jamestown was produced Monday, but it won’t have the cash to air piece until next week, when it is set to receive about $1.35 million in public financing. It recorded incurring no expenses to Jamestown prior to July 1.

The campaign struggled to raise the $250,000 in qualifying contributions of no more than $100 each.

On June 19, Larry Weitzner of Princeton, N.J., a founder of Jamestown, contributed $100 to McKinney, as did two other members of his household. The contributions edged McKinney closer to the public financing — and the day it can pay Jamestown and get the campaign on the air.