Visconti convinced he can find the waste in Connecticut’s budget 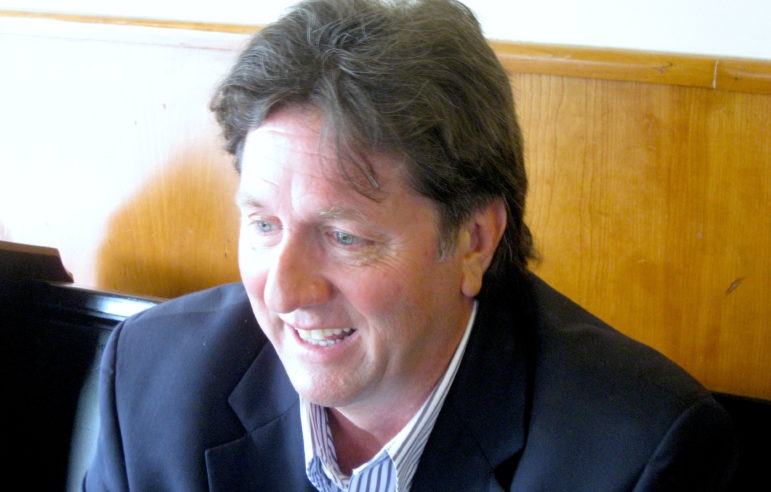 Part Three in a weekly series focusing on Connecticut’s five gubernatorial candidates and their respective plans for reinvigorating the state’s economy and closing a $1.4 billion budget deficit projected for after the election.

But the West Hartford Republican, who brings his budget books with him on the campaign trail, insists he will have one before his rivals do.

Visconti, who didn’t qualify for the GOP primary but seeks to petition onto the November ballot – says the solutions rest with changing a culture of waste and bureaucracy that has lost touch with Connecticut families and businesses.

“People don’t mind paying for the services,” Visconti, 57, told The Mirror during an interview last week. “But they don’t like it when they feel in their gut that there is waste.”

With the exception of two years on the West Hartford Town Council starting in 2007, and an unsuccessful bid for Connecticut’s first congressional district in 2008, Visconti’s political experience is modest.

With an associate’s degree in electronics technology from the University of Hartford, Visconti has close to four decades of experience in construction, first working for his father and then running his own business.

And the “product” Visconti hopes to deliver by Labor Day is a detailed account of how he would reshape Connecticut’s budget to close a projected $1.4 billion hole in post-election finances.

According to nonpartisan analysts, that represents about a 7 percent shortfall built into the budget the governor and legislature must develop starting in February. More importantly, critics say, it is a product of hundreds of millions of dollars in borrowing, fund raids and other gimmicks that have pushed costs – plus interest – into the future.

“We are bleeding with waste and I believe most people in government know it,” Visconti said. “They just don’t know how to address it.”

‘Looking for a Connecticut moment’ with labor

“The big enchilada” when it comes to streamlining state finances, Visconti says, involves the nearly one-third of the budget dedicated to salaries and benefits. And another 15 percent of the budget is sent to cities and towns – where the bulk also is spent on personnel costs.

But Visconti insists he and the unions will not be adversaries.

Visconti’s reference to the “Wisconsin moment” is an allusion to Wisconson Gov. Scott Walker and the state’s assembly that stripped public service workers of most of their collective bargaining rights … and to Visconti’s opponent and fellow Republican Tom Foley, who caught heat from state unions for asking  “When is the Wisconsin moment going to come to Connecticut?”

But a spokesman for one of the largest bargaining unions representing state employees, said Visconti is only half right.

State employees “want to be partners in improving government,” said Larry Dorman, spokesman for Council 4 of the American Federation of State, County and Municipal Employees. He said they always are open to discussing ideas to make government programs work better. “They care about providing the best quality services.”

But most unions agreed to a wage freeze and benefit restrictions in 2009, and to a two-year pay freeze and more benefit cutbacks in 2011.

“They are simply not interested in going back to the table,” Dorman said, adding that workers are “sick and tired of being scapegoated” by some politicians who represent labor as the cause of Connecticut’s budget problems.

But Visconti said he would redirect some of the savings from this outsourcing to increase payments into the state employee pension fund. Gov. Dannel P. Malloy undertook an initiative to accelerate payments starting in 2012, but the fund’s assets still cover less than half of its long-term obligations.

“That’s how we’re going to drive [the unions] to the bargaining table,” Visconti said.

He added that “If the unions won’t help us, then the next governor will bring you tax increases, no matter who it is.”

A ‘fortune’ in Medicaid fraud

Another big chunk of the budget Visconti is targeting involves Medicaid, a federal program run in partnership with the states that provide health care – including nursing home services – for the poor.

State spending alone on Medicaid represents about $3 billion, and Visconti said he’s convinced the program is plagued with severe fraud.

“I think there’s a fortune [in potential savings] in there,” he said.

Malloy and legislature’s from both parties have increased savings targets tied to fraud prevention in recent budgets. About $60 million was supposed to be saved last fiscal year and just over $100 million in savings is built into the current budget, which began on July 1.

That’s less than 1/13th the size of the deficit the next governor faces.

And state analysts haven’t even confirmed yet if the $60 million target has achieved.

“There’s no evidence that I know of to support” Visconti’s contention, said Ellen Andrews, director of the New Haven-based Connecticut Health Policy Project, who added that she believes the state Department of Social Services has been effective in deterring Medicaid abuses.

Andrews says there’s another problem for those who hope to close the deficit by controlling Medicaid costs: Connecticut already is doing just that.

According to an analysts by Andrews’ nonprofit group, state spending on Medicaid dropped by about $200 million this fiscal year – and it probably will take another two years for costs to return to 2013-14 levels.

Further complicating matters for Visconti: for every $1 the state spends on Medicaid, it receives anywhere from 50 cents to $1 back in matching payments from the federal government. Andrews said any cut in state spending will result in less revenue.

And while he opposes further tuition hikes for public colleges and universities, Visconti said he believes they could absorb a cut in state aid and still keep tuition flat.

“It’s about the culture, the agenda, the bureaucracy that’s inside state government, and that includes the universities,” he said. “The cost of higher education has gone through the roof, but I think UConn has gotten too big for its britches. It could use a dose of economic reality.”

Visconti said he suspects university spending on administration and other areas outside of classroom instruction could be reduced.

The $1.2 billion budget the UConn Board of Trustees adopted for the 2014-15 fiscal year does raise tuition and other fees by 4.3 percent for in-state undergraduate students attending the main campus in Storrs. But officials said most of the $52 million in new spending is tied to 61 new faculty positions – including 35 posts for Next Generation Connecticut, a new program designed to dramatically expand enrollment in engineering and technology courses.

Total state budget support for UConn peaked in 2011 when $329 million was dedicated to university costs.

But legislators and Malloy slashed almost 15 percent off that total in 2012 as they grappled with a state budget deficit of historic proportions. The new UConn budget projects $348.7 million in state support in 2014-15 – meaning the university will have waited four years to recover the funds it lost in 2011-12.

Though he opposes most municipal aid cuts, Visconti said he also believes the state can save a modest amount by reducing education grants to districts who send some students to charter schools. 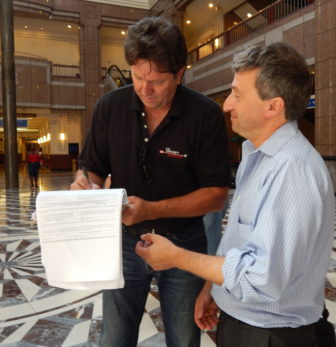 But former state Rep. Jonathan Pelto, a Mansfield Democrat who – like Visconti – is petitioning onto the November ballot, said this proposal only would further weaken under-funded local schools. Although the ECS program does assign grant dollars on a per-pupil basis, the state has paid out less than the full amount its formula recommends for almost two decades.

“His proposal would lead to massive property tax increases,” said Pelto, one of the most vocal critics of the charter school system. “Urban schools across the state would not be able to maintain comprehensive education programs.”

Transportation a must, tax hikes a ‘last resort’

Despite his focus on cutting spending, Visconti said tax increases “are not off the table for me.”

But they are, he quickly added. a “last resort.”

If forced to turn to tax hikes to balance the books, Visconti said he prefers to spread the pain, with small increases on most taxes.

He opposes making the state income tax more progressive with higher rates on the wealthy, something for which state employee unions long have argued.

“I believe the wealthy don’t need to be here,” he said, adding many already have residences in multiple states, and could leave the Nutmeg State with little difficulty. “So why chase them away?”

Connecticut needs to diversify its base and particularly increase the number of businesses operating and paying taxes here, Visconti said.

Rather than borrowing hundreds of millions of dollars for “corporate welfare,” Visconti said he would work to streamline regulatory agencies and invest scarce bonding dollars in transportation improvements.

The West Hartford Republican said he’s not convinced Connecticut could impose tolls without exacerbating already severe congestion on its highways, particularly on Interstate 95 in Fairfield County. But he said he would dedicate all fuel tax revenues for transportation, ending the long-standing practice of using some of those dollars for non-transportation programs.

“I’m looking at the budget as if we are in bankruptcy court,” Visconti said, adding he would show voters exactly how to “get rid of the dead weight” in Connecticut’s spending by summer’s end.

“I will call on every candidate to put together a budget before the election,” he said. “If they won’t then they’re not really being true.”

There’s never been a test like COVID-19. Will the state pass?

The COVID-19 pandemic is subjecting state governments everywhere to an unprecedented stress test.

There are 6,906 coronavirus cases in Connecticut, while 206 people have died and more than 1,200 people are hospitalized.

CT residents on living in the time of coronavirus: ‘We’ll get through this’

A hot dog man/mayor. A psychiatrist. A beekeeper. These are just a few of the voices from the COVID-19 pandemic.

There were palms on Palm Sunday. Just not where you'd expect.