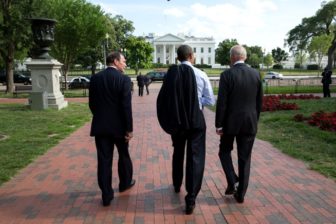 Washington – It was a rare bipartisan love fest as Sen. Richard Blumenthal and other members of the Senate Veterans Affairs Committee questioned Robert McDonald, President Obama’s choice to head the troubled Department of Veterans Affairs on Tuesday.

“I think you are the right man for the job and I think you will do a great job,” said Sen. Johnny Isakson, R-Ga.

Citing the nominee’s “candor” and “dedication,” Sen. Jerry Moran, R-Kan., the first senator to call for former VA Secretary Eric Shinseki to step down, said he plans to support McDonald’s nomination. So did most on the panel.

“I believe we are all rooting for you,” said Sen. Richard Blumenthal, D-Conn.

McDonald, 61, said “systematic failures” must be addressed and that he would take a series of actions over his first 90 days on the job “to deliver the needed reforms our veterans deserve.”

A former CEO of Procter & Gamble, West Point graduate and Army veteran, McDonald is likely to easily win Senate confirmation. But the bipartisan support for his candidacy, and a chorus of compliments from the members of the Veterans Affairs Committee Tuesday, masks a harsher reality.

Congress is bitterly divided on how to reform the scandal-plagued VA, where some facilities covered up long wait times for care – resulting in the deaths of some veterans – and were found to have adopted other questionable practices.

McDonald said “systematic failures” must be addressed and that he would take a series of actions over his first 90 days on the job “to deliver the needed reforms our veterans deserve.”

The Republican-led House and the Democratic-controlled Senate have each approved reform bills, but House and Senate negotiators cannot agree on a final bill.

The Senate bill would authorize $35 billion in spending through 2016 to build new clinics, hire doctors and make it easier for veterans who can’t get prompt appointments at a VA facility to get care elsewhere. The House bill is similar, but has a smaller price tag.

Meanwhile House Republicans have rejected a $17.6 billion emergency funding request from Acting Secretary Sloan Gibson, who says he needs the money to fix the problems at the VA.

“I’m sure your and your family wondered if you were in your right mind in accepting the offer,” Blumenthal said. “You are about to take over a bankrupt corporation.”

Even as he indicated full support for McDonald, Blumenthal was perhaps one of the toughest questioner of the day.

Blumenthal has been feuding with Gibson, the man McDonald would succeed, over information the senator requested months ago about “site specific” information about Connecticut’s VA facilities.

In a letter, Blumenthal has asked Gibson for more information about a VA audit of facilities sparked by disclosures about wait times. That audit found severe problems at several VA facilities, but none in Connecticut, which has VA hospitals in West Haven and Newington and six outpatient clinics in Danbury, New London, Stamford, Waterbury, Willimantic and Winsted.

“We will respond to the letter, Senator Blumenthal,” McDonald promised.

Blumenthal and other members of the Connecticut congressional delegation are also waiting for the VA to explain why wait time in the state – and across the nation – soared after problems at the VA were disclosed.

“Will you commit to me you will provide a response?” Blumenthal asked.

“If confirmed I will provide you a response,” said McDonald, adding “but knowing Sloan Gibson I think you will get a response [from him.]”

Blumenthal also sought commitments from McDonald to address discrepancies in care when it comes to women vets and protections from for-profit schools that are defrauding veterans.

McDonald is expected to be confirmed by the full Senate before Congress leaves for August recess. But there’s doubt Congress will be able to approve a bill before the break that would reform the VA and provide McDonald with more money to hire medical staff and build new facilities.

Sen. Mark Begich, D-Alaska, urged McDonald to move ahead without Congress once confirmed.

“As soon as we get you confirmed, get busy,” Begich said. “Be bold — not reckless — but bold.”