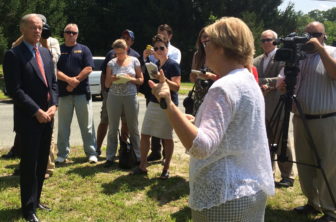 Tom Foley is listening. Cathy Osten is talking. And the press are recording.

Sprague – Near the gate of a doomed paper mill, Republican Tom Foley alighted from the back seat of a blue BMW sedan Tuesday to assail the economic policies of Gov. Dannel P. Malloy, only to find himself in a raucous street debate with the local first selectwoman and soon-to-be jobless workers.

Foley, a candidate for governor, came to fault Malloy for the recently announced plans by a global investment firm to close Fusion Paperboard, costing 140 jobs in this struggling mill town. By the time he left, Foley had defended the decision of the absentee owners and told the selectwoman and workers they shared blame for the mill’s demise.

“You want to blame people who are hundreds or thousands of miles away, malign management,” Foley told the workers and First Selectwoman Cathy Osten, a Democratic state senator and Malloy supporter. “Listen, you have failed, because you have lost these jobs.”

That incensed Mike D’Auria, a Fusion manager who is trying to assemble a group that can buy a portion of the mill.

“These guys worked their butts off. Every single day, I watched them work, work, work. Me, too. Her, too,” D’Auria said, his voice rising. “Everyone who is being affected by this worked our asses off to get this right. We did not cause this, as she did not. The market drove this business into this position.”

It was hardly the exchange planned by Foley, a Greenwich investor whose previous run for governor was hampered by allegations during the 2010 Republican primary and general election that he had bled cash from a failing Georgia textile manufacturer, the Bibb Co.

As Foley argued with Osten and several workers, the scene was recorded by reporters and staff members of the campaigns of John P. McKinney, who is competing with Foley for the GOP nomination, and Malloy, the first-term Democratic incumbent.

Mark Bergman, the spokesman for the Malloy campaign, had come to defend the governor. But when the news conference finally ended, Bergman just smiled, shook his head and told reporters he had nothing to add. Democrats later posted an unedited video of the entire event on YouTube.

Osten and the workers had drawn the parallels to the Bibb Co. that Bergman was prepared to make with a six-page paper about Foley’s management of the textile company. 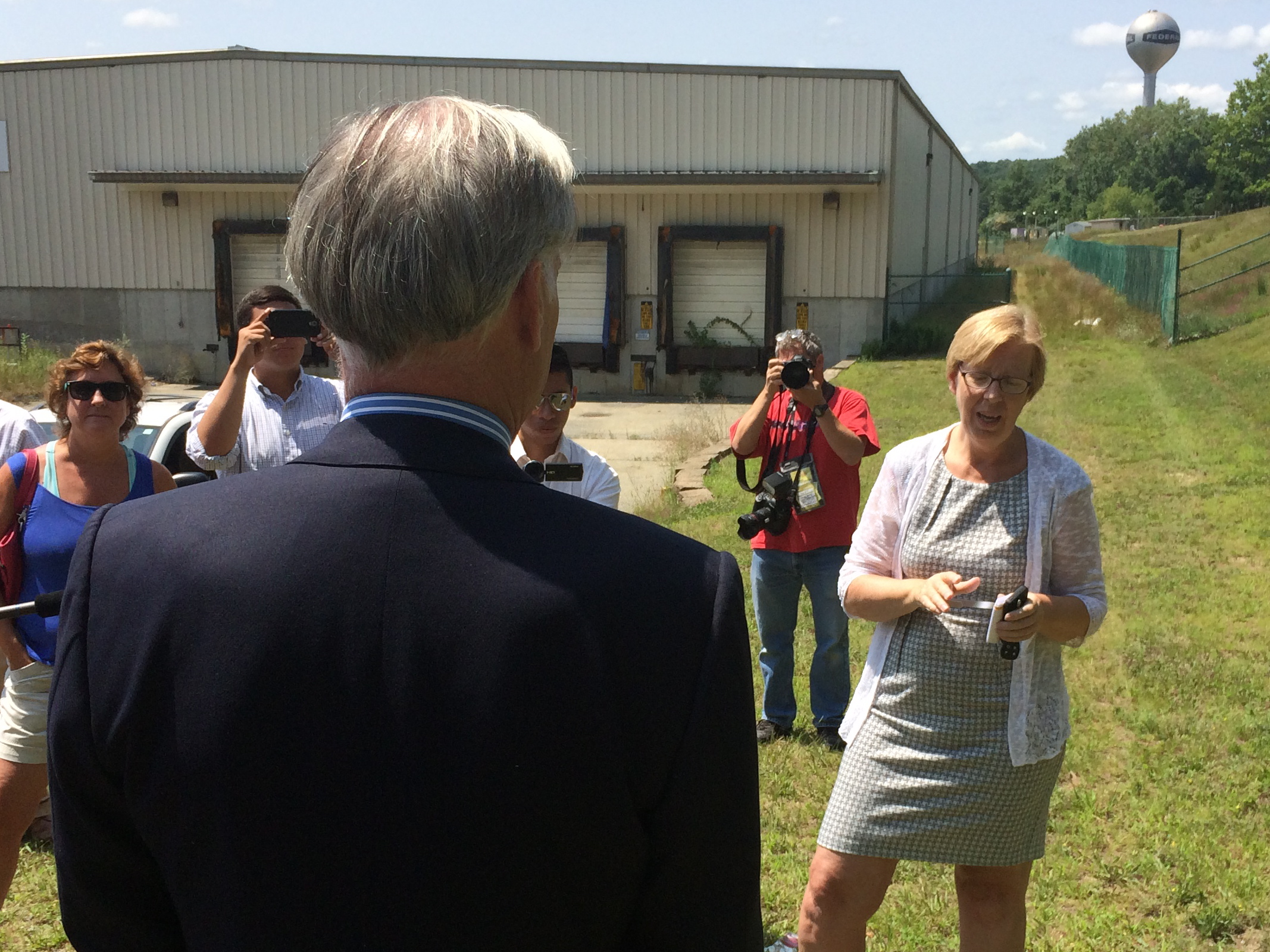 Foley and Osten faced each other outside a factory.

Fusion is owned by OpenGate Capital, a private investment firm with offices in New York, Los Angeles and Paris. The Bibb was owned by NTC, an investment firm Foley founded in 1985 after leaving Citi Group. Bibb eventually was forced into bankruptcy, and Foley left as chief executive. It later closed.

“You’re a businessman,” said Rich Harrelle, a 29-year employee of the mill and president of United Steel Workers Local 1840, which represents the Fusion employees.

“You close mills down,” Harrelle said.

“Have you ever made a decision…”

Foley interrupted to correct himself and Harrelle.

“I have never closed a mill down, sir. I didn’t close the Bibb mill.  A subsequent owner closed it. So, please get your facts right,” Foley said.

“I want you to get your facts right,” Harrelle replied. “Because when you come here, I can tell you about 140 lives that just went down the tubes.”

“That’s a shame, and it’s policy driven,” Foley told him. “It’s a result of the policies of this governor and maybe the first selectwoman.”

Foley remained composed, even as the exchanges grew sharper. He stood, hands folded in front of him, his blue suit jacket buttoned, throughout the event. 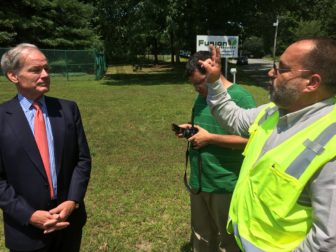 Foley and Mike D’Auria, a company manager who says the cause of Fusion’s demise was market forces, not politics.

Standing in front of a Fusion sign, Foley insisted that the mill was closing due to a poor business environment that he says is the result of Malloy’s first-year tax increase of $1.5 billion and other anti-business policy decisions.

“We simply need a smarter set of policies to support businesses,” Foley said, “and arrest this exodus of jobs.”

“As governor I’ll be able to do that,” Foley said. “I have a business background. I spent 35 years in the business community, and  so I understand what employers need and want to hear from a leader to be willing to invest and remain in a state like Connecticut. I know I can do that. We simply need smarter policies.”

Foley did not answer directly when asked if a Foley administration would have extended Fusion economic assistance, as did the Malloy administration. The state gave the company a $2 million loan in September 2013, which was partly forgivable if employment increased the mill remained open for 10 years. The state was prepared to offer another $1 million in assistance.

Andrew Doba, a spokesman for the administration, said the company now must repay the loan and pay a financial penalty of 7.5 percent on the outstanding balance of $1.8 million.

“Listen some incentives and some credit support programs work,” Foley said, without saying if he would have approved a similar loan.

At that point, four minutes into what turned out to be a 30-minute press conference, Osten interrupted.

“Are you a member of the press?” he asked.

“I am the first selectman,” she replied.

“OK, you’re not interviewing me. Are there any questions from the press?” Foley asked.

But she persisted, and Foley soon was drawn into a debate with Osten, then with several Fusion employees.

“This may be your press conference, but eastern Connecticut is extremely important to me,” Osten said.

“We have all worked hard here,” Osten told Foley.

“OK, but why have you lost them, ma’am?” Foley asked. “Why have you not succeeded in this endeavor?”

Osten told him the company is closing because OpenGate is selling assets to a competitor, similar to the practices she says helped lead to the demise of the Bibb Co. Foley’s replies then grew sharper, and he started to focus on Osten.

“You have failed at your  effort to keep jobs here, haven’t you? You’ve failed. And Gov. Malloy has failed along with you. And you’ve wasted taxpayer money,” Foley said.

Osten said the state is collecting its debt. She told Foley he has offered no indication how he would have kept Fusion open. At times, she and Foley spoke over each other.

“Ma’am, you’ve failed,” Foley repeated. “How can you stand here in front the of the TV cameras when you’ve failed? You’ve lost 140 jobs.”

Harrelle stepped forward, and Foley asked him, “Are you upset you lost your job?”

“Am I upset?” Harrelle repeated, seeming puzzled. “Yeah. One hundred forty people have lost their jobs, OK. We went through six years of concessions to keep this place running.”

Harrelle said the union signed a six-year contract in March, accepting a two-year wage freeze. With the new contract and the state’s assistance, Harrelle said he thought Fusion had stabilized.

Foley told Osten and the workers they did not understand business. To Osten, he said if OpenGate has sold off assets, it was out of necessity.

In response to a reporter’s question — the press managed to ask a few questions — Foley said he was unaware of any company that would sell off assets of a profitable company to cash in on an investment.

“It’s a fundamental axiom of business. If the equipment is worth more than what they are earning on the equipment and the labor, it’s a failing operation,” Foley said. “And the first selectwoman here and Gov. Malloy have helped drive this business out of Connecticut.”

D’Auria told him market forces were responsible, not Malloy.

“The plant’s closing. One hundred and forty jobs are leaving the community. What more do I need to know to come here and talk about it and talk about the failure of Gov. Malloy’s policies? That’s all I need.”

Fusion specializes in food packaging, and the industry is using more plastic and less paperboard.

“If you understood the paper industry, plastic is overtaking cardboard. Day by day by day, the industry changes,” D’Auria said. “I’m just telling you that.”

OpenGate, whose other extensive holdings include TV Guide, did not respond to a request for comment on what led the company to sell its paperboard manufacturing machine, which the union says was one of only two in the world.

On its web site, OpenGate says its “investment strategy is focused on lower-middle market, cross-border, corporate divestitures and carve-outs” and that one characteristic of its acquisitions is a “motivated seller.” It purchased Fusion in 2011 from Cascade, a publicly traded Canadian company. At the time, the company says it saw opportunities for growth in the paper boxboard business.

Foley was asked by a reporter if every business failure was a failure of the Malloy administration.

He said it was not. Some industries “mature” and no longer can compete, such as textiles.

Foley acknowledged he had done no close analysis of Fusion, other than reading what had been published in the press.

“The plant’s closing. One hundred and forty jobs are leaving the community. What more do I need to know to come here and talk about it and talk about the failure of Gov. Malloy’s policies?” Foley said. “That’s all I need.”