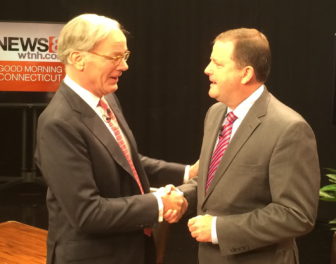 Tom Foley and John P. McKinney at their second and final debate.

New Haven – In their final televised forum before the Republican primary for governor Tuesday, Tom Foley and John P. McKinney strived during a free-wheeling hour Sunday to undermine each other’s ability to be a credible voice for change against Gov. Dannel P. Malloy in November.

The live WTNH, Channel 8 event was a contentious exercise in political branding. Foley punched out poll-tested phrases: McKinney was a “political insider” and “career politician.” McKinney countered that Foley’s retreat to talking points made him the true career pol and called into question his mastery of issues and ability to lead.

The moderators gave the two candidates free rein, a license McKinney was eager to employ as he tries to close on Foley, who began the race as the acknowledged favorite, buoyed by name-recognition as the 2010 nominee who lost to Malloy by a scant half-point.

[View the debate at WTNH.com]

Malloy was a palpable presence at their only other one-on-one televised encounter, a debate last month airing on FoxCT. The first-term Democrat was less a factor Sunday, perhaps a nod by Foley to McKinney’s sharper tone in recent weeks. For the first time, McKinney seemed to be top of mind for Foley.

But Foley did not deviate from a strategy that has emphasized broad themes and largely kept him away from potentially dangerous details, most notably on the gun controls adopted after the Newtown school massacre or specifics on cuts he would make to balance next year’s budget.

McKinney, 50, of Fairfield, a legislator for 16 years and leader of the state Senate’s GOP minority for seven, used a viewer question on the sweeping gun controls passed after the Newtown massacre in his district to challenge Foley’s refusal to take a stand.

Foley, 62, a Greenwich businessman whose campaign has appealed to gun owners,  criticized the 2013 gun law as wrongly focusing on the availability of large-capacity magazines and military-style weapons such as the AR-15 instead of mental health. But he refuses to take a position on those elements.

Foley countered by saying the root cause of the Newtown tragedy was mental health, not the availability of firearms. He pivoted to his theme of the morning: McKinney failed to nudge the legislation away from guns and toward mental health, an example of him “standing by” in Hartford.

“This is so clearly something that had to do with the tragedy in Newtown and why you, as a legislator who’s been there for 15 years, couldn’t help this governor figure that out is beyond me,” Foley said of mental health. “Instead, you reached into things that had nothing to do with Newtown.”

Adam Lanza, the Newtown killer, used an AR-15 and 30-round magazines legally purchased by his mother to kill 20 first-grader and six adults in less than five minutes. Lanza also killed his mother.

On taxes, Foley criticized McKinney’s vote for a bipartisan transportation bill passed under Gov. M. Jodi Rell that invested in Metro-North rail cars and other infrastructure improvements of the cost of boosting the gross receipts tax on petroleum products.

When McKinney challenged for Foley for opposing overdue improvements on the aging commuter rail line so vital to Republican-heavy Fairfield County, Foley said he was not opposed to the improvements – only the means of paying for them.

“You’re trying to have it both ways,” McKinney said.

“Tom, you have to pay for things, and you, you don’t want to answer a single question. You want to be devoid of specifics. You would have voted against new rail cars for Metro-North,” McKinney said. “That’s a job killer.”

Foley told reporters later he would have used savings in undisclosed areas to pay for the improvements.

Foley jabbed at McKinney for past tax votes, though McKinney voted with all GOP legislators against Malloy’s budgets and tax increases, and for proposing an income tax cut so late in the campaign.

“You’ve had some kind of epiphany here in the last three weeks, when all of a sudden, you’re a fiscal conservative,” Foley said. “I’ve been talking about these kinds of changes needed for Connecticut government for over four years. I’m glad you’re finally coming on board and seen the light.”

At a press conference on July 31, McKinney promised that in the second year of his administration he would eliminate the income tax for households earning less than $75,000, a loss of $750 million in state revenue. Foley says he would take a half-point off 6.35 percent sales tax, a loss of $300 million.

McKinney pulled out a list of votes on budges that increased taxes.

“I voted against all of them but one,” McKinney said, referring to a Rell budget to raised the tax on cigarettes, while exempting some items from the sales tax.. “I had five budget votes that actually cut taxes.”

McKinney said he was more willing than Foley to address the size of government, though he picked on a political safe area to identify for cuts: 9,000 state managers that he says Malloy identified as top heavy, then did nothing to shrink.

They candidates differed on the use of tax credits for economic development, but that difference was quickly reduced to an argument over which of them sounded like a politician.

McKinney said he supported the tax credits for film and digital production, which he says helped attract Blue Sky Studios to Greenwich and NBC Sports to Stamford. The tax credits were authorized in the same budget that raised the tax on cigarettes.

“Are you telling me you would have voted against the film tax credit because you wouldn’t want to increase the cost of cigarettes?” McKinney asked.

“Well,” McKinney said, interrupting, “that’s the choice you had, Tom.”

Foley said his private-sector experience would help him bring efficiencies to state government.

McKinney said that the nation’s latest generation of governors, some of whom Foley has praised, came from government, not business.

“Their backgrounds are like mine, Tom, legislative experience,” McKinney said. “That’s why I am the better candidate to be governor.”

Both candidates reiterated their opposition to the legalization of marijuana for recreational use, calling cannabis a gateway drug.

Each pronounced their opposition to the Common Core standards for curriculum, with McKinney pledging to halt its implementation. Foley said he would impose stricter standards only on failing schools.