Victor in GOP primary, Foley says, ‘Change is on the way’ 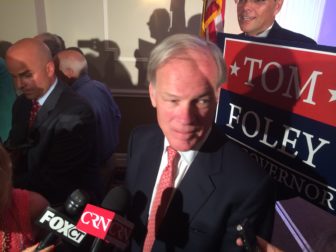 Tom Foley swarmed by reporters after accepting the GOP nomination.

Waterbury – Tom Foley will get a second crack at Dannel P. Malloy.

Foley, 62, the Greenwich businessman who lost to Malloy by half a percentage point in 2010, easily won the Republican primary for governor Tuesday, weathering a late push by state Sen. John P. McKinney of Fairfield, the challenger he preferred to ignore until recently.

The identity of his running mate was uncertain. Heather Bond Somers led the three-way primary for lieutenant governor ahead of Penny Bacchiochi and David M. Walker, but her lead was fewer than 1,000 votes, the trigger for a recount. That did not stop the Foley victory party.

“Change is on the way!” Foley told supporters at 10 p.m., sticking to the same talking points that carried him throughout the campaign. “We will have pro-growth policies and reduce taxes, get control over spending and support job creators.”

McKinney had publicly conceded 20 minutes earlier with a promise to back the nominee, prompting cheers at Foley’s victory party, where the speech was shown live on television.

“Let me tell you, the race does not end tonight. The goal was to elect a new governor. The goal was to make Dan Malloy a one term governor,” said McKinney, the Senate minority leader for the past seven years.

The Malloy campaign took its first post-primary shot before McKinney conceded, saying voters do not want a return GOP oversight of government. Malloy was the first Democrat to win the office in 24 years, despite his party’s dominance of the General Assembly and, more recently, every congressional seat. The governor is widely seen as one of the nation’s more vulnerable Democratic incumbents.

The Republican Governors Association, which spent $1.6 million on the 2010 race, quickly congratulated Foley. “It’s time to put Tom Foley in the governor’s office,” said New Jersey Gov. Chris Christie, chairman of the RGA who recently campaigned with Foley in Greenwich.

Foley, a GOP fundraiser and former U.S. ambassador to Ireland during the administration of George W. Bush, had been reluctant to engage McKinney, but he promised an energetic campaign to unseat the Democrat who bested him four years ago in Connecticut’s closest race for governor in 56 years.

“I don’t like being an opponent of a fellow Republican. That hasn’t been enjoyable,” Foley told The Mirror before the polls closed. “But with Gov. Malloy, who I consider largely accountable for the fact that Connecticut is not doing well, I’m going to be very aggressive criticizing him and making it clear to the voters how important it is they have a change in leadership and change in direction in November.”

Malloy and Foley begin their fall campaigns deadlocked in most polls, evenly matched as participants in a voluntary public financing program that will provide each $6.5 million. Whatever his margin of victory Tuesday, Foley predicted a post-convention bounce.

On May 9, Foley had a 31-point lead over McKinney in the last public poll conducted in an intra-party fight that that lazily unfolded until last month, when both men qualified for public financing and began advertising on radio and television.

But as Foley pursued a November strategy directed at softening Malloy – at one point, Foley claimed the only way he could lose the GOP nomination would be to get hit by a bus – McKinney made the case that Foley had no vision other than not being Malloy. 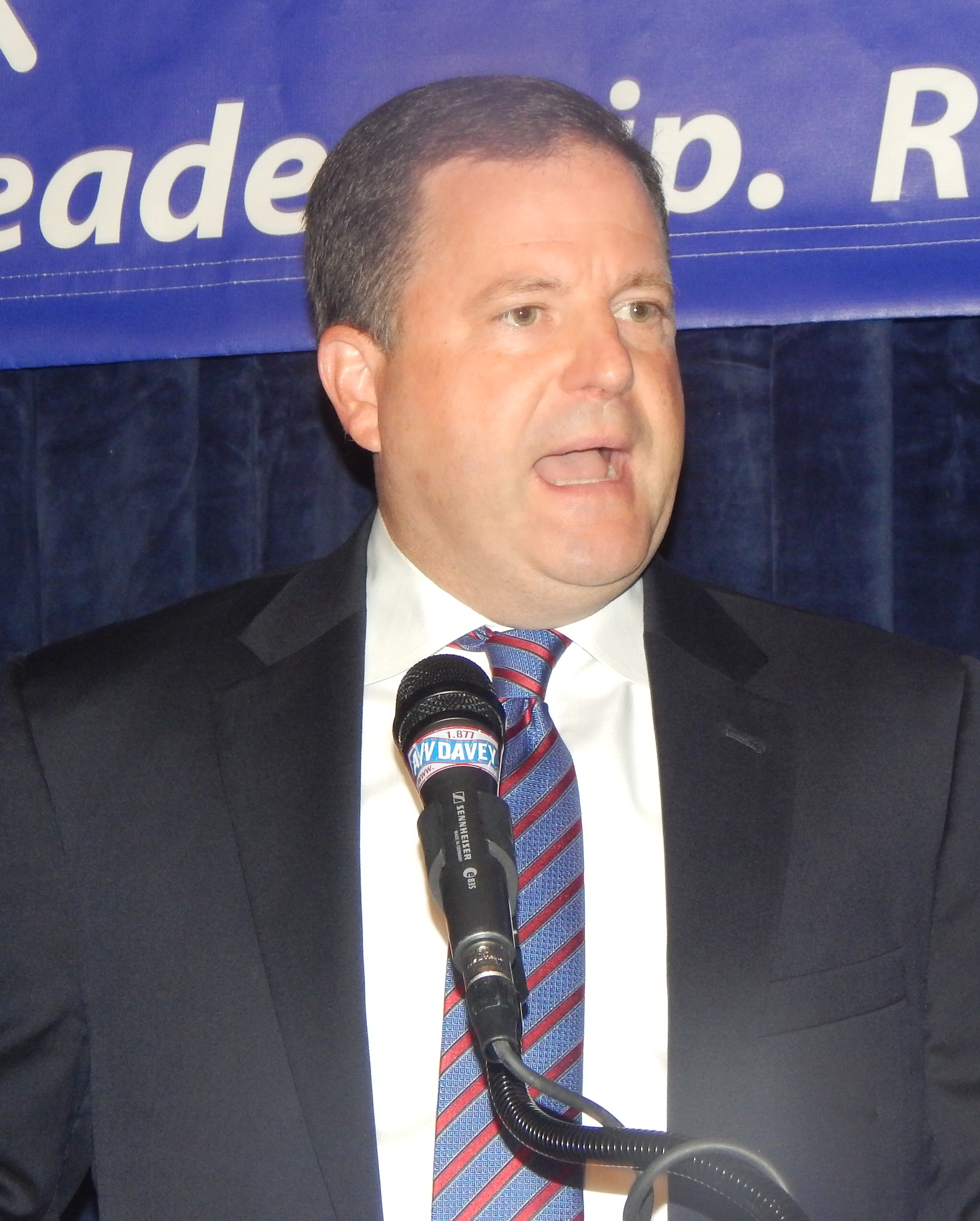 McKinney as he conceded.

Foley did little to challenge an evolving narrative that Malloy and independent expenditure groups, notably the Democratic Governors Association, now will try solidify. The DGA spent $1.78 million on the 2010 race.

“He’s going to have to explain clearly, as we have in the state House, why what Dan Malloy has done has made your life worse, and what he would do to make it better,” said Rep. Themis Klarides of Derby, a McKinney supporter who is expected to be the new House GOP leader.

But she and others said that should be easy.

“I really think defeating Dan Malloy is a motive that unifies everyone, and nothing happened in this primary that I can see leaving hard feelings that would prevent that,” said Sen. Joe Markley, D-Southington, who campaigned with Foley.

Foley emphasized his private sector-experience, dismissing Malloy and McKinney as career politicians and political insiders. He gambled that an overarching message of change, seasoned with a bet that voters had a strong case of buyer’s remorse, would trump specifics.

And, at least in the primary, he was right.

“Don’t blame me, I voted for Tom Foley” was a bumper sticker on Foley’s car and an essential theme of a campaign that Republicans expected from the moment he conceded defeat four years ago after a tardy and chaotic vote count in Bridgeport.

Foley said he had no regrets for emphasizing what he called big themes, ignoring jibes from McKinney that he was ducking issues. 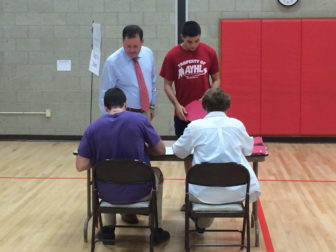 John P. McKinney arrives at the polls in Fairfield with his 18-year-old son, Matthew, who was voting for the first time.

“I think we’ve carried the message to the voters that we’ve planned from the start, and that is Connecticut needs to head in a different direction, that I’m not a career politician,” Foley said Tuesday afternoon, offering what turned out to be the outline of his acceptance speech. “I’m an outsider. I’m going to come in shake things up. I’ve got a pro-growth policy agenda that involves getting control over spending, reducing taxes.”

McKinney, 50, an eight-term legislator who was unknown by 71 percent of voters in a Quinnipiac University poll in May, attacked Foley in commercials and during two televised debates for refusing to take positions on issues ranging from spending cuts to the gun controls McKinney helped pass after the Newtown school massacre in his district.

But hours before the polls closed, McKinney pledged to support the GOP nominee if it was Foley, and Tuesday night he praised the candidate whom he had insisted was inadequate.

“We fought hard,” McKinney told his supporters. “We came close. But at the end of the day Tom Foley ran a better race.”

Malloy, 58, was unopposed for the Democratic nomination, but he is hobbled by an economy recovering at a glacial pace and another protected budget shortfall, despite a huge tax increase in 2011.

Tom Foley confers with his campaign manager, Justin Clark, outside their headquarters in Southington.

McKinney was the first to formally announce his candidacy for the GOP nomination, competing with a field that ballooned to six and still had five contenders at the Republican convention in May.

But his fundraising slowed after the first of the year,  and some gun owners organized against him. At the convention, he reached the qualifying threshold of 15 percent only after a series of first-ballot vote switches.

After watching his 18-year-old son, Matthew, vote in his first election, McKinney said he had no regrets or reservations about how his campaign unfolded.

According to sources in both campaigns, McKinney’s internal polling had him closing from 31 points to 14 points two weeks ago and Foley’s later polling showed the margin narrowing to 8 points. Then Foley had a press conference go awry outside Fusion Paperboard, a failing mill in Sprague. As reporters watched, Foley was drawn into an argument with workers and the local Democratic selectwoman.

The 30-minute exchange in Sprague was recorded by Democrats and quickly posted on You Tube. McKinney used it in a hard-hitting ad, but Foley insisted the event was a positive for him. That may have been bravado, but the results Tuesday indicated it was not a major issue among Republicans.

But it resurrected an issue that nearly derailed his primary campaign in 2010: His investment firm’s stewardship of a textile mill in Georgia that failed as Foley’s company extracted management fees.

Democrats promise the issue will be an element of the fall campaign.

Foley is to hold an 11 a.m. press conference Wednesday in Trumbull, apparently without knowing the name of his running mate. Democrats are holding their major annual fundraiser, the Jefferson-Jackson-Bailey dinner, that night in Hartford.