Sure, Tom, I’ll endorse you, but there’s just one thing…

Trumbull – He allowed that his late mother would have been appalled, but John P. McKinney dumped a bucket of ice water over the head of Tom Foley on Wednesday, living the dream of every politician who has ever dutifully attended a unity press conference the morning after losing a primary.

Ostensibly, it all was for charity. The ALS “ice bucket challenge” is a social media phenomenon, an old-fashioned chain letter updated for the age of selfies, Facebook and You Tube. The challenged have a choice: It’s either a cold shampoo – or pony up $100.

As McKinney explained it to Foley, who trounced McKinney the previous evening in the Republican primary for governor, the ritual is simple: With video rolling, those dared to take the challenge get to challenge three others.

“Then I get to have the fun,” McKinney said.

It was hardly an ambush. McKinney and Foley each showed up dressed in campaign casual: khaki pants and blue shirts, open at the collar. No nice suits. No ties.

“Nice,” McKinney said, drawing out the word when Occhiogrosso was named.

Foley poured ice into the gray plastic bucket of water. McKinney asked if an aide was recording it for posting on Facebook, an unnecessary request. TV was on the scene and every reporter had their iPhone out, even those who make their living on radio.

“Oh, my God, I can’t believe I’m doing this. My mother wouldn’t be happy,” McKinney said, sporting a grin more appropriate for a cat in Cheshire than a pol in Trumbull. “Here we go.” 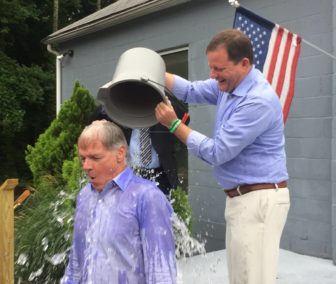 Foley closed his eyes. Down came a shower on the rocks.

“Good job,” said, McKinney who took the challenge Tuesday. “That was awesome.”

“Did you bring a towel?” Foley asked.

Occhiogrosso, whose name is habitually mangled by Foley, had a quick response to the challenge: “Not until he learns how to pronounce my name correctly.”

Andrew Doba, the communication director for the 88th governor of Connecticut, sighed when a reporter called and asked if his boss was willing to have a bucket of ice water dumped over his head.

Malloy’s campaign tweeted that the governor already had accepted a challenge to be carried out after a race Saturday in Stratford. It will not be a bipartisan dunk. The water will be applied by Lt. Gov. Nancy Wyman, not Foley.