Washington – Rep. Joe Courtney, D-2nd District, came into office on the slimmest of victories, a surplus of just 83 votes that earned him the jocular nickname “Landslide Joe” among his colleagues.

This year, as he seeks re-election for a fifth term in Congress, Courtney hopes the nickname is no joke.

Since that 2006 race where he narrowly defeated former Republican Rep. Rob Simmons, Courtney, 61, has won strong support in an economically challenged district. He has done it mostly by doing some of the things Simmons did, like standing up for the Naval Submarine Base New London and pressing for contracts for Electric Boat, which builds the Navy’s nuclear subs.

Soon after he assumed office in 2007, Courtney, a member of the House Armed Services Committee, worked with other Connecticut and Rhode Island lawmakers to persuade the Navy to double production of nuclear submarines from one to two a year.

That earned him another moniker on Capitol Hill: “Two Subs Joe.”

Ron Schurin, a political science professor at the University of Connecticut, said Courtney has several strengths that play well in the 2nd District, the largest congressional district in the state and the most rural.

“He is a moderately liberal Democrat, and that works well philosophically in the district,” Schurin said.

Courtney, who has won re-election with more than 60 percent of the vote since that squeaker in 2006, faces Republican businesswoman Lori Hopkins-Cavanagh this time around.

Even though Hopkins-Cavanagh is a political newcomer with little campaign cash, Courtney said he’s not taking re-election for granted.

“That squeaker [against Simmons] is kind of tattooed on me,” he said. “You have to be on your toes and you have to be visible.”

Courtney also said voter disgust at Congress, which has sunk to historic lows in popularity, can lead to a volatile electorate.

“There’s a high burden of proof for any incumbent,” he said.

The 2nd Congressional District covers the eastern part of the state from the Long Island Sound to the Massachusetts border. It has been hard hit by uncertainties in defense spending and by a slowdown in gaming which has stunted the growth of two big casinos in the district — the Mohegan Sun, run by the Mohegan tribe, and Foxwoods Resort, built by the Mashantucket Pequots.

Besides supporting local interests, which has earned him the backing of the district’s businesses, Courtney won the hearts of the state’s dairy farmers by promoting an overhaul of the federal dairy program that will help them stay in business when milk prices drop.

As with his work on the Armed Services Committee, Courtney’s membership on the House Agriculture Committee is often bipartisan, Schurin said.

Rep. Joe Courtney, left, was among those House members tasked to sell the bill limiting interest on college loans.

The congressman was also tapped by Democratic leaders to sell a bipartisan bill that would stop a sharp increase in the interest rates of a popular college loan. The legislation, now law, tied the loans to the 10-year Treasury note. It was praised by college officials, including those at UConn, whose main campus is in his district, but panned by the state’s U.S. Senators, Dick Blumenthal and Chris Murphy, who thought the legislation left college loan rates still too high and too volatile.

Courtney said he is seeking re-election because he believes he can still get things done in what many consider a “do-nothing Congress.”

“Despite the polarized, dysfunctional track record as a whole, I feel there are some real accomplishments I can make for the people in the district,” he said.

Besides making sure the Navy purchases two subs from Electric Boat each year, Courtney cited his efforts to include $1.3 billion in a defense bill for a new class of submarine that will be the largest and most expensive in the U.S. military and that Electric Boat will help build. He also pushed for an new way to pay for this new fleet of submarines — with a tactic that hasn’t been used since the 1980s — so funding for other nuclear subs would not be threatened.

But there’s more to do to safeguard shipbuilding in the district and “higher education issues are also going to be out there,” as Congress struggles to reauthorize an education bill next year, he said. “I feel very much that I can make a difference.” 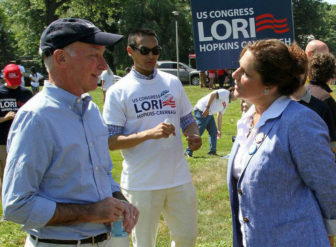 Courtney was raised in West Hartford, the youngest in a family of five boys. A graduate of the University of Connecticut law school, Courtney went into private practice before being elected to the state House, where he served four terms, concentrating on health issues. His first run for Congress, in 2002 against Simmons, was unsuccessful. He is married and lives in Vernon. He and his wife, Audrey, have two children.

Finzio said he’s worked in Congress as a page and an intern and has seen none as responsive as Courtney’s. He also said Courtney, who campaigned for Finzio, is a presence in the district when he’s not on Capitol Hill.

But even a supporter like Finzio finds a drawback.

“The issue he might have is he’s not a flashy guy,” the mayor said.

Courtney will move up in seniority if he wins his fifth term in Congress. But Democrats are still in the minority in the House and are likely to be again after the Nov. 4 elections. They need to win 17 seats to take over the House and President Obama’s plunge in popularity is expected to make that difficult.

But Courtney is hopeful of moving up the ranks of the House Armed Services Committee, and becoming the top Democrat on a subcommittee in charge of the military’s sea power. The Democrat in that position, Rep. Mike McIntyre of North Carolina, is retiring.

“Nothing is totally guaranteed, but I’m excited about the prospect,” he said.

To try to cover the vast terrain of the 2nd District, Courtney’s campaign has divided it into four quadrants. But so far his re-election strategy is modest as far as advertising buys.

“I am definitely going to do some radio and some cable (ads,)” he said. “But whether I will do the full throttle, I don’t know yet.”