Hopkins-Cavanagh takes on Courtney in a long-shot bid 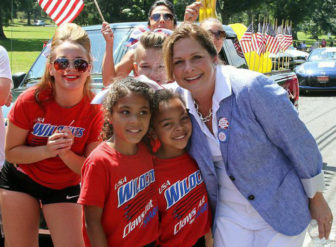 Lori Hopkins-Cavanagh is low on campaign funds, but high on energy.

Like many challengers, Lori Hopkins-Cavanagh is short on campaign cash and name recognition and long on ideas, enthusiasm and disgust with the way things are run in Washington D.C.

“I’ve got quite a mountain to climb,” said Hopkins-Cavanagh, a Republican, of her bid to win Connecticut’s 2nd District seat in Congress.

Despite long odds, Hopkins-Cavanagh, 54, has invested $51,000 of her own money into her campaign against Rep. Joe Courtney, a Democrat who has raised more than $1 million and since 2007 has represented the district that includes 64 municipalities in eastern Connecticut.

Hopkins-Cavanagh also has a campaign strategy. Being short on cash, it relies heavily on lots of social media and, hopefully, press coverage. She also has the energy and determination to try to convince voters it’s time for a change.

McMahon, former co-owner of the World Wrestling Federation, spent more than $100 million in two failed attempts for a Connecticut U.S. Senate seat. Former House Majority Cantor, lost a GOP primary to a candidate who raised a fraction of the money raised by the former Republican leader.

Ideologically, Hopkins-Cavanagh is hard to buttonhole. She was once a registered Libertarian. And when she ran unsuccessfully for mayor of New London in 2011, she was on the ballot as an unaffiliated candidate who had asked Connecticut’s Green Party for its support. She won 96 votes out of about 4,400 in that election.

During a trip to Washington last month to seek backing for her race against Courtney, Hopkins-Cavanagh met with Americans for Tax Reform, a conservative group headed by Grover Norquist that asks candidates to commit themselves to oppose all tax increases by signing the “Taxpayer Protection Pledge.” 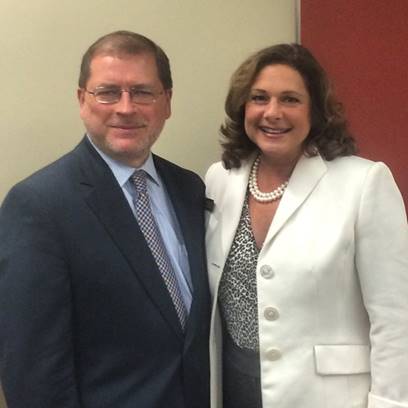 “I’ll present to anyone,” Hopkins-Cavanagh said. “My campaign staff called anyone available and asked ‘Can we present to you?’ Americans for Tax Reform said ‘yes.’”

She also said the people at Americans for Tax Reform “said they were glad to see that someone from Connecticut came down because no one has in a long time.”

To Hopkins-Cavanagh, ideas matter more than ideology. She considers herself a conservative activist with a libertarian streak. The owner of a New London-based real estate company called ShoreViews Real Estate, she believes Washington’s problems can be fixed with a strong dose of business sense.

“A businessperson who is innovative doesn’t think like other people,” she said.

She’s staked out some clear differences between herself and Courtney.

Courtney is a strong supporter of the Affordable Care Act. Hopkins-Cavanagh opposes the health care law.

Former Rep. Rob Simmons a Republican who represented the 2nd District until he lost it to Courtney by a paper-thin margin in 2006, said Hopkins-Cavanagh should focus on attacking Courtney for his support of the ACA.

“People have lost their coverage, people aren’t keeping their doctors,” Simmons said. “I’d say ‘Look, Joe, you were 100 percent for this program and it isn’t working.’”

President Obama promised Americans they would be able to keep their doctors under the ACA. But insurers cancelled policies that did not meet new federal standards for coverage, forcing many to change their plans, and sometimes their doctors. Obama has apologized for what he considers an unforeseen consequence of the ACA. But Republican candidates are going to continue to bash Democrats on the issue in this election year.

Simmons also said he would have advised Hopkins-Cavanagh to start her campaign earlier – and raise at least $700,000 in campaign cash, about 10 times what she’s been able to raise.

Simmons is not optimistic about the chances of Republican candidates in Connecticut this year, save those in local races who don’t have to spend a lot of money on television advertising.

“In Connecticut we have one-party rule,” he said. He is referring to the all-Democratic congressional delegation and the Democratic lock on the governor’s office and both chambers of the state assembly.

“It’s very difficult for Republicans in the state to raise money and get support” he said.

But the 2nd District has had GOP representation before, and Hopkins-Cavanagh thinks it will again. She says she hopes to appeal to a growing number of independent voters who are concerned about the state’s economy, especially in the 2nd District, which has lagged behind other parts of Connecticut in economic recovery.

“I’m in the middle class and so I feel all the pain,” she said.

Raised in New London, Hopkins-Cavanagh put herself through the University of Connecticut and started her first company, an advertising and public relations firm, at age 25. She and Tim Cavanagh, her husband of six years, have four children, two of them adopted.

“I started my own company at 25 because I wanted to call the shots,” she said.

Hopkins-Cavanagh opened her real estate company in 2008 and is also a conservative radio show host.

She became the GOP candidate for the 2nd District seat when she won 70 percent of the delegates at the Connecticut Republican convention in May, beating out nominees Evan Evans and Dan Reale.

Besides her differences with Courtney over the ACA, Hopkins-Cavanagh splits with the Democrat on immigration policy. She has adopted the GOP’s hard line on border security and the need to immediately deport an influx of unaccompanied minors to the United States. Courtney has not. 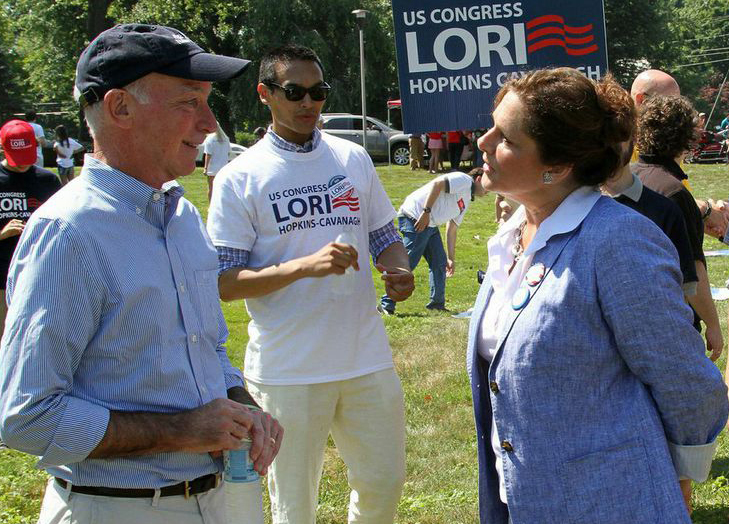 She also, somewhat quixotically, has taken on Courtney over the reauthorization of the Export-Import Bank, a government corporation that guarantees loans to foreign purchasers of U.S. goods.

Courtney wants Congress to reauthorize the bank’s charter, which expires at the end of September.

Hopkins-Cavanagh believes the bank only helps large U.S. companies, at taxpayer expense, and wants the Ex-Im bank reformed. But she differs from tea party Republicans who want it eliminated.

“But if the tea party likes me, that’s great,” she said.

Ron Schurin, a UConn political science professor, said Hopkins-Cavanagh does not fit the mold of Connecticut Republicans, who tend to be moderate, especially on social issues, as was Simmons. That could hurt her chances, Schurin said.

“She has a reputation of being in the right-wing of the Republican Party,” Schurin said.

Hopkins-Cavanagh would dispute that, pointing out she supports the upcoming marriage of her gay son to his boyfriend.

“I believe in liberty,” she said.

But she is concerned that Courtney does not take her candidacy seriously.

“He basically ignores me,” she said.

She is also concerned that voters may not take her seriously. A blistering opinion column in the New London Day called her abrasive and said her ideas were half cooked.

But she says she’s steered by common sense and determined “to fight to protect the Constitution” and  give voters in the 2nd Congressional District a clear choice on Election Day.