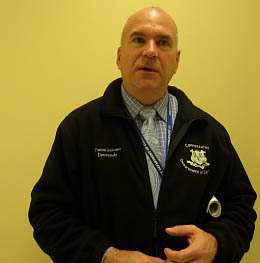 James E. Dzurenda is resigning as Connecticut’s correction commissioner to accept one of his profession’s toughest jobs: Overseeing New York City’s system of jails, including the vast Rikers Island complex that has come under the scrutiny of the U.S. attorney’s office for allegations of brutality by guards and inadequate mental health care for inmates.

“It’s exciting. I can’t wait for the challenge,” Dzurenda told The Mirror in a telephone interview from Washington D.C., where he was attending a conference.

Gov. Dannel P. Malloy’s office announced Tuesday that New York Mayor Bill de Blasio named Dzurenda as the first deputy commissioner for the city’s Department of Correction, a job that calls for him to oversee the jails in all five boroughs. His resignation is effective Aug. 29.

Dzurenda was the second Malloy appointee to resign Tuesday, each leaving for higher-profile jobs carrying significant professional challenges. The other was Kevin Counihan, who is leaving Access Health CT, the state’s health insurance exchange, to join the Obama administration as head of the federal marketplace created under the Affordable Care Act.

No administration likes to see high-profile departures in the midst of a difficult re-election campaign, but gubernatorial spokesman Andrew Doba said the recruitment of Counihan and Dzurenda “is a validation of the choices the governor’s made over the last four years.”

Malloy chose Dzurenda, who began his 27-year career as a 20-year-old guard, over two out-of-state finalists in November, making clear that the career employee who rose through the ranks had impressed during his six months as interim boss.

“I plan on being around for a long time,” Dzurenda said then.

Dzurenda said Tuesday he was recruited by Joseph Ponte, the correction commissioner charged with making addressing the shortcomings identified by the U.S. attorney’s report. In Connecticut, Dzurenda was involved in efforts to revamp mental health services for inmates.

Malloy named Scott Semple, the deputy commissioner, as acting head of the department.

One of the applicants for the state correction job last year was Dora B. Schriro, the former New York City correction commissioner whom Malloy later named as his commissioner of emergency services and public protection.

Her tenure in New York under former Mayor Michael Bloomberg has come under scrutiny as the U.S. attorney’s office recently completed a multi-year investigation of violence at Rikers.

Howard Wolfson, a spokesman for Bloomberg, defended Schriro in an interview with the New York Times. He said she had made reforms, such as increasing the number of supervisors and bolstering mental health care, taking advantage of additional money allocated by the mayor’s office. As a result, Wolfson told the newspaper, “We experienced the start to improvements in 2013.”

Dzurenda now oversees a system that housed 17,151 inmates as of the monthly census when he was appointed in November. With no system of county or city jails, the Department of Correction houses sentenced inmates, who comprise about 75 percent of the prison population, and those awaiting trial. The population has dropped from 19,551 five years ago.