Foley, Malloy fight to write the history of the Bibb Co.

Eighteen years after its bankruptcy and four years after its introduction to Connecticut voters in series of political ads, the defunct Bibb Co. of Bibb City, Ga., continues to haunt the political ambitions of its former owner, Tom Foley of Greenwich, Conn.

The re-election campaign of Gov. Dannel P. Malloy is using Bibb footage recycled from his 2010 race to attack a central tenet of Foley’s second campaign for governor: As a successful businessman, Foley knows how to create jobs.

Malloy’s latest commercial opens with video from January of Foley announcing his candidacy for the 2014 Republican nomination: “I know what it takes to create jobs.”

It jumps to four former Bibb employees who blame Foley for the demise of the textile company that he took over in 1985 and dramatically grew in 1988 by acquiring the assets of a textile giant, J.P. Stevens. But a decade later, Foley was forced out by creditors after cost-cutting failed to keep the Bibb viable in the face of a recession and the loss of key customers.

The ad takes liberties, compressing time to make it sound like Foley walked in cutting jobs, when the job reductions came years later after a period of growth through acquisition.

“When Foley purchased the plant, he just run it into the ground,” Chuck Redden of Salem, Ala., a technician at Bibb for more than two decades, says at the top of the 30-second commercial. Three co-workers appear, each adding a line.

Jerri Broadwell: “No severance pay. No insurance. No nothing. You’re just gone.

Totsy Harris: “It just went from bad to worse and then all at once, it closed.”

Redden: “And now, it’s just like a ghost town. Foley didn’t care about us one bit. We lost our jobs, our livelihood, everything.”

Foley declined to be interviewed about the Bibb on Tuesday or Wednesday, when he was preparing for his first debate with Malloy, the first-term Democrat. But in the past, Foley blamed the failure of the Bibb on the market forces well beyond the control of him or any other executive.

More recently, when he found himself under fire outside Fusion Paperboard in Sprague, a closing factory that Foley had hoped to use as evidence of Malloy’s mishandling of the economy, Foley tried to distance himself from some of the cost-cutting employed in a vain effort to save the Bibb. 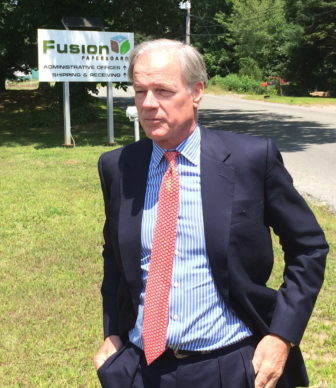 He took offense when a Fusion Paperboard employee told him that market forces, primarily a shift to plastic packaging by the frozen-food companies that Fusion supplied with coated paperboard, was responsible for the closing – something that Foley would understand as a man who had closed mills.

“I have never closed a mill down, sir. I didn’t close the Bibb mill.  A subsequent owner closed it. So, please get your facts right,” Foley said.

Foley was right about the Bibb finally closing after he no longer owned it. But according to HFN, a weekly trade paper published by the Home Furnishings Network, Foley did order the sale of two mills and cut hundreds of jobs when the Bibb could not meet its debts.

“Instead of running it at a reduced schedule, we have decided to move that equipment into other facilities that have plenty of space to handle it,” Foley told the paper.

Chris Cooper, a campaign spokesman, said the word liquidate was the paper’s, not Foley’s.

“No plants were liquidated. They were sold,” Cooper said.

Malloy’s ad suggests that Foley, who had left Citigroup to open his own mergers and acquisition business, slashed jobs upon acquiring the Bibb, which he initially oversaw as board chairman.

That appears to be untrue.

A more accurate view is that Foley was intent on growth, took on significant debt, then aggressively cut costs only years later when revenues fell short of expenses.

When Foley’s holding company, NTC, purchased Bibb in 1985, the manufacturer specialized in supplying chains with private-label goods and licensed juvenile bedding. It greatly expanded, only to see the business upended by a recession and a market shift by retailers from private-label to branded goods.

In May 1995, HFN reported that Bibb had missed a $9 million interest payment on a $160 million debt to bondholders and that Foley, who took over as chief executive the previous year, had cut $10 million in overhead, about half of which came from cutting the workforce from 6,000 to 5,500.

Of the $4 million in annual management fees his company, NTC Holdings, collected from Bibb, Foley told the paper, “I’m sure that will be part of negotiations with bondholders.”