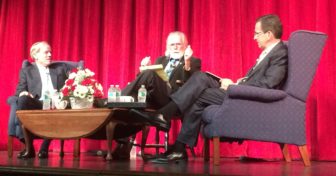 Norwich – Gov. Dannel P. Malloy and Tom Foley spent a fast-paced hour in their first debate Wednesday night straining to make the race for governor turn on questions of each other’s records, Malloy’s as governor and Foley’s as a businessman.

In a sweltering theater at Norwich Free Academy, the Democratic incumbent and Republican challenger played a punishing game of serve and volley, riffing for more than 10 minutes at one point in response to a single question on gun control.

Malloy, who seldom publicly acknowledges regret or mistakes, apologized to teachers, whom he insulted three years ago by saying tenure could be won simply by showing up.

“I should admit that was bad language,” said Malloy, who was greeted before the debate by rallying unions members, including the president of AFT-Connecticut. “I shouldn’t have said it. I apologize for saying it.”

It was the only apology offered by two candidates who make no secret of their mutual disdain, perhaps the inevitable result of a campaign that began six years ago and has continued with barely a pause after Malloy’s narrow win in 2010.

Back to back rematches are relatively rare in politics: Malloy, 59, a former Stamford mayor, bested Foley, 62, a Greenwich businessman, by half a percentage point four years ago, the state’s closest gubernatorial election in 56 years.

On Wednesday, they faced each other from upholstered wingback chairs, separated by a single questioner, Ray Hackett of the Norwich Bulletin. Each could leave able to claim a measure of success on a night marking a new phase in the campaign as students return to school, vacations end, and voters begin to think about November.

Malloy was the aggressor, consuming all but 10 minutes of his allotted him in the first half hour, prompting a warning from Hackett. But the governor, a former prosecutor, kept a civil tone that often escaped him in his first race with Foley in 2010.

Foley, after two passive debate performances against John P. McKinney in the GOP primary, showed he could volley with the governor, even when a central tenet of his campaign – his acumen as a businessman – came under sharp attack.

Reinforcing a message now being delivered in television ads, Malloy described Foley as failing so badly in his management of the Bibb Co., a Georgia textile company central to this and the last race for governor, that his bondholders forced him to surrender control.

“You defaulted, and as a result you were forced out,” Malloy said.

Malloy replied that the added payroll came through an acquisition that larded the company with a deadly load of debt.

The governor might have pursued the line of attack too long.

The crowd applauded as Foley admonished the governor, questioning why a man whose constituents are “feeling a huge squeeze” in 2014 was so fixated on a business failure in the 1990s.

“Why are you spending so much time looking at some deal I supposedly did in the 1990s? You must have spent hours on this,” Foley said. “Stop the negative ads.”

Malloy softened his tone, but pressed the attack: Foley says he can fix the state in eight years, but he couldn’t save the Bibb Co. 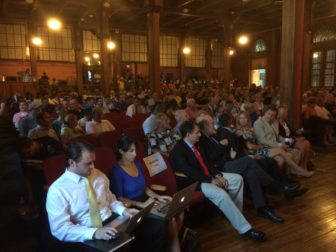 The audience was packed with partisans.

Then came a twist of the knife — a reference to Foley’s blaming Malloy for the failure of Fusion Paperboard at a raucous press conference near the plant’s main gate, where he engaged in a 30-minute argument with workers and Cathy Osten, the Democratic first selectwoman.

“When your companies failed,” Malloy asked, “did you go to their governors and blame them?”

With an early question, Hackett challenged both men with a seldom-discussed aspect of the gun law passed after the Newtown school massacre: Possession of military-style firearms and large-capacity ammo magazines are now illegal, unless their owners met a deadline for registration.

Dozens, if not hundreds, of gun owners filed late, allowing the state police to know the identity of citizens who likely are illegally possessing a banned weapon. Hackett asked if those citizens should be pursued by police.

Foley said he would somehow arrange the pardons of anyone so charged, an uncertain prospect in a state where the governor cannot grant pardons, but only makes appointments to the Board of Pardons and Paroles.

“I’ll make sure they are not prosecuted,” Foley said.

Foley said that section of the law makes potential felons of law-abiding gun owners. “Governor, what were you thinking?” he asked. “That aspect of the law I would change.”

Malloy did not directly say if police should pursue gun owners, something the State Police have not done. Instead, he said registration was a reasonable accommodation. 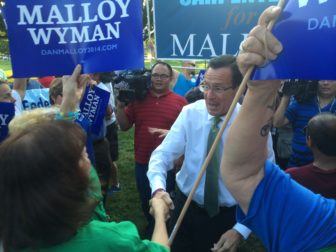 Malloy was greeted by union supporters outside the Norwich Free Academy. Foley did not appear outside.

He also challenged the premise of the question. Gun owners who missed the deadline could have followed the law by selling or giving the weapons to someone out of state, he said.

“For all you know and I know, they don’t have those guns,” Malloy said.

Malloy said the more significant difference dividing him and Foley on gun control is that he has a clear position on repeal.

“So let me be very clear, if a repeal comes to me, I will never sign a repeal. I will have a discussion about how to make the law better. I’ll have a discussion about how to make it work easier for folks,” Malloy said. But the main thrust of the law — a ban on the sale of military-style firearms, such as the AR-15, and magazines capable of holding more than 10 rounds — is sacrosanct, he said.

Foley said he would not seek repeal, but he would sign a repeal bill if one was passed by the General Assembly.

Joe Visconti, a Tea Party activist and gun owner, will be on the ballot in November as a petitioning candidate. He was not invited to the debate, which is expected to be the first of about a half-dozen.

Hours before the debate, after weeks of being pummeled for sharing few details about his plans for the budget and economy, Foley released what he called his plan for restoring “Pride and Prosperity in Connecticut.”

The document is compilation of his earlier policy statements. And like those earlier statements, it largely avoids any specifics on how these priorities would be achieved.

For example, the plan talks about focusing economic development efforts on growing jobs in seven “high-potential” fields. It says only that, “I will reach out personally to targeted companies and dedicate a significant portion of my time to convincing them that Connecticut is the place they should be.”

Foley’s repeats his earlier pledges to cut one-half of 1 percentage point off of Connecticut’s 6.35 percent sales tax rate and to eliminate the business entity tax — a $250 biennial levy – on companies with fewer than 50 employees. It does not mention any spending reductions or other tax increases to finance these forms of tax relief.