Esty will use record, incumbency to ward off Greenberg’s challenge

Washington – Chatting with Vice President Joe Biden about manufacturing jobs at an event at Goodwin College last week, Rep. Elizabeth Esty, D-5th District, was enjoying one of the many benefits of being an incumbent — access to the most powerful people in government.

Besides high-profile appearances with top members of her party, Esty, 55, is benefiting from incumbency, too, in her effort to repel a challenge by Litchfield businessman Mark Greenberg, a Republican in his third attempt to win the 5th District seat.

There is, of course, a fundraising advantage, and some political lessons she’s learned on Capitol Hill. There is also $183,000 worth of “franked,” or taxpayer-funded, mailings that helped introduce Esty to all the people in the 5th District.

In her first campaign ad, which began running this week, Esty touts an important role of an incumbent member of Congress — constituent services.

The 30-second spot shows features a Viet Nam War veteran, Tom Campbell of Danbury, who had stopped receiving his Social Security benefits. He tells viewers he was at risk of losing his home until Esty stepped in and helped him win back his benefits.

“Elizabeth Esty cut through the red tape and fixed the problem,” Campbell says.

As a freshman lawmaker, Esty needed to broaden her name recognition because her previous political experience was limited to serving on the Cheshire town council and a one-term seat in the state assembly representing only  a fraction of a district that includes 41 towns in five Connecticut counties.

“She’s going to use the privileges that come with incumbency,” said Gary Rose, head of the political science department at Sacred Heart University.

Along having congressional staff to help constituents with their problems, and opportunities to attend high-profile events like Biden’s recent visit, Esty is able to connect with voters at smaller venues like town halls and “Congress on the Corner” events. 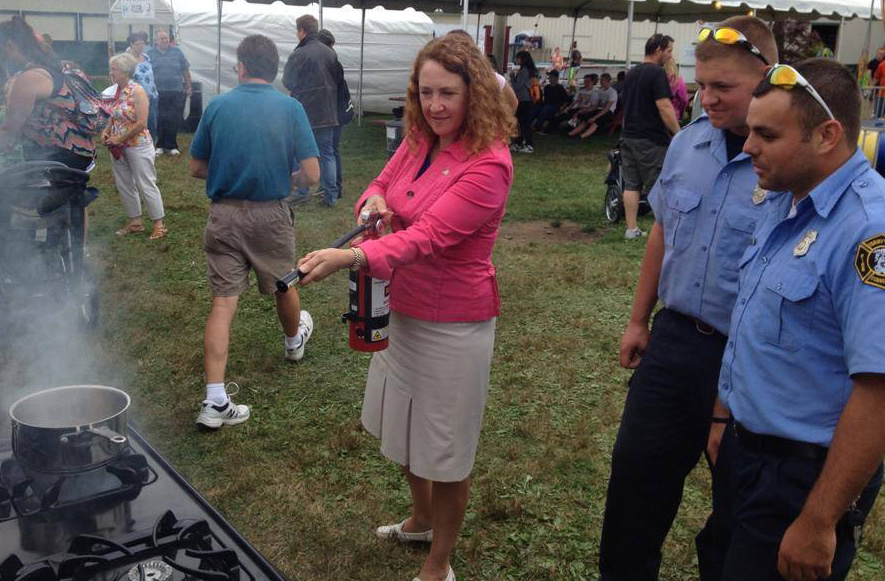 Rep. Elizabeth Esty gets a hands-on lesson from fire fighters at the Terryville Fair.

“People have seen me out and around and have a better sense of who I am–know that I am available and accessible,”said  Esty.

She said likes holding roundtables and events that center on issues – ranging from job training to the scourge of opioid addition in the district. But, even as she has a full calendar of public appearances — some of which are announced on her campaign web site — Esty asserts she’s not been stumping much yet.

“I’ve got my hands full doing my job,” she says.

Rose said Esty has positioned herself well for a district that has been represented both by Democrats and Republicans and is home to a growing number of independent voters.

“We know that she is at heart a liberal, but she doesn’t have the image of a liberal. People see her as more of a moderate,” Rose said.

Esty prefers to call herself a “pragmatist” and says her constituents care little for party affiliation.

“This district is a pragmatic district,” she said.

With her distinctive red curls flying, Esty is often seen hurrying down the halls of Congress to meet with constituents and lobbyists, attend a committee meeting or press conference — often about gun control — or cast a vote against GOP-sponsored legislation.

Winning a narrow victory over Republican Andrew Roraback in 2012, Esty has taken the business of Congress seriously, immersing herself in issues she believes will resonate with her constituents, including manufacturing, veterans affairs, transportation and — in large part because she represents Newtown — gun control.

But she’s subject to the freshman curse.

Members of Congress are most likely to lose their seats in the first re-election bid, especially those from swing districts like the 5th. In fact, the district was meant to give both Republicans and Democrats a shot at representation, having been drawn up by a bipartisan commission in 2002 to give two incumbents who were forced to run against each other a “fair fight.”

The contest between Esty and Greenberg is the hottest congressional race in the state, attracting attention and help from the national parties and competing with the governor’s race for advertising airtime. 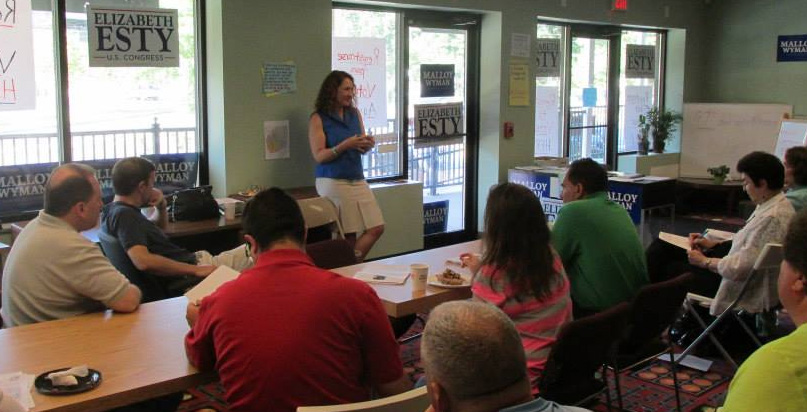 For now, analysts say the seat is Esty’s to lose. The Cook Political Report has rated it “likely Democratic” and predicts Esty will win by at least 3 percentage points.

“But it’s a tough year for Democrats, and it could be close,” said David Wasserman of the Cook Political Report.

Esty serves on the House Transportation and Infrastructure Committee and the Committee on Science, Space and Technology and has made use of those assignments to win modest legislative victories in her freshman term.

She teamed up with conservative Rep. Lamar Smith, R-Texas, to win approval of a bill concerning science, technology, engineering and math (STEM) education and pushed through another bill that would help reopen old dams in her district so they could be used to generate hydroelectric power.

Esty was also active in a new House Democratic gun caucus created after the Newtown shootings.

She said she has grown close to some of the members on the panels she served on and counts Rep. Susan Brooks, R-Ind., among her closest colleagues.

Brooks said she met Esty during freshman class orientation “and immediately realized I could relate to her.”

“We enjoyed discussing our shared backgrounds in law and our kids who are around the same age,” Brooks said.

Straight ahead: A nasty campaign

Esty was born in Oak Park, Ill., but moved frequently because of her father’s work as a construction engineer. After graduating from high school in Minnesota, she went east to attend Harvard University, where she met her husband Dan, who served as the head of Connecticut’s Department of Energy and Environmental Protection before he returned to a teaching position at Yale University in January

Her husband’s former position prompted Roraback and other opponents to charge that she benefited from campaign contributions from people her husband regulated, but no quid pro quo was ever found. She has three children and a law degree from Yale.

Last week, the National Republican Campaign Committee recycled the allegations that Esty did something wrong in accepting campaign contributions from individuals working for industries her husband once regulated –a range of businesses that covered a wide spectrum of energy and environmental concerns.

The NRCC, which has committed itself to helping Greenberg’s campaign, is also tying Esty to Gov. Dannel Malloy, who is suffering from low popularity ratings and is in a tight race against Republican Tom Foley.

“This is the first time she’s had to run in a midterm election and she’s doing it with one of the most unpopular governors in the country (and one of her biggest supporters) at the top of the ballot,” the NRCC release said.

Rose said Esty will be helped by the fact that the number of Democratic voters is growing in the 5th District, fueled in part by a surging Hispanic population in towns like Danbury and New Britain.

He also said Democratic attacks on Republican nominees for their position on women’s issues may help win support for Esty, especially among the district’s female voters.

“She articulates well the Democratic charges of a [Republican] ‘war against women,’” Rose said.

Esty said she knows she’ll have to fight for re-election.

“I ran for office in Cheshire knowing it was a very Republican town,” Esty said. “I am used to having to make my case.”

But she won’t have to make that case alone.

The Democratic Congressional Campaign Committee, which helped Esty get elected in 2012, has made her race a priority.

It has reserved nearly $800,000 in air time in Connecticut. The House Majority PAC, a Democratic political superfund, has also allocated $583,018 worth of advertising time in the Hartford market to run independent ads in October in support of Esty’s re-election.

The candidate has also been successful at raising money for her campaign. Federal Election Commission reports show Esty raised nearly $2 million as of June 30.

The money pouring in to help Esty is expected to result in a barrage of ads attacking Greenberg — ads that will likely begin running soon and continue without cease until Election Day.

Esty said there are stark difference in her “values, priorities and approaches” from Greenberg’s and she intends to let voters know about them.

“There is a very clear choice here,” she said, “I intend to make that choice known.”