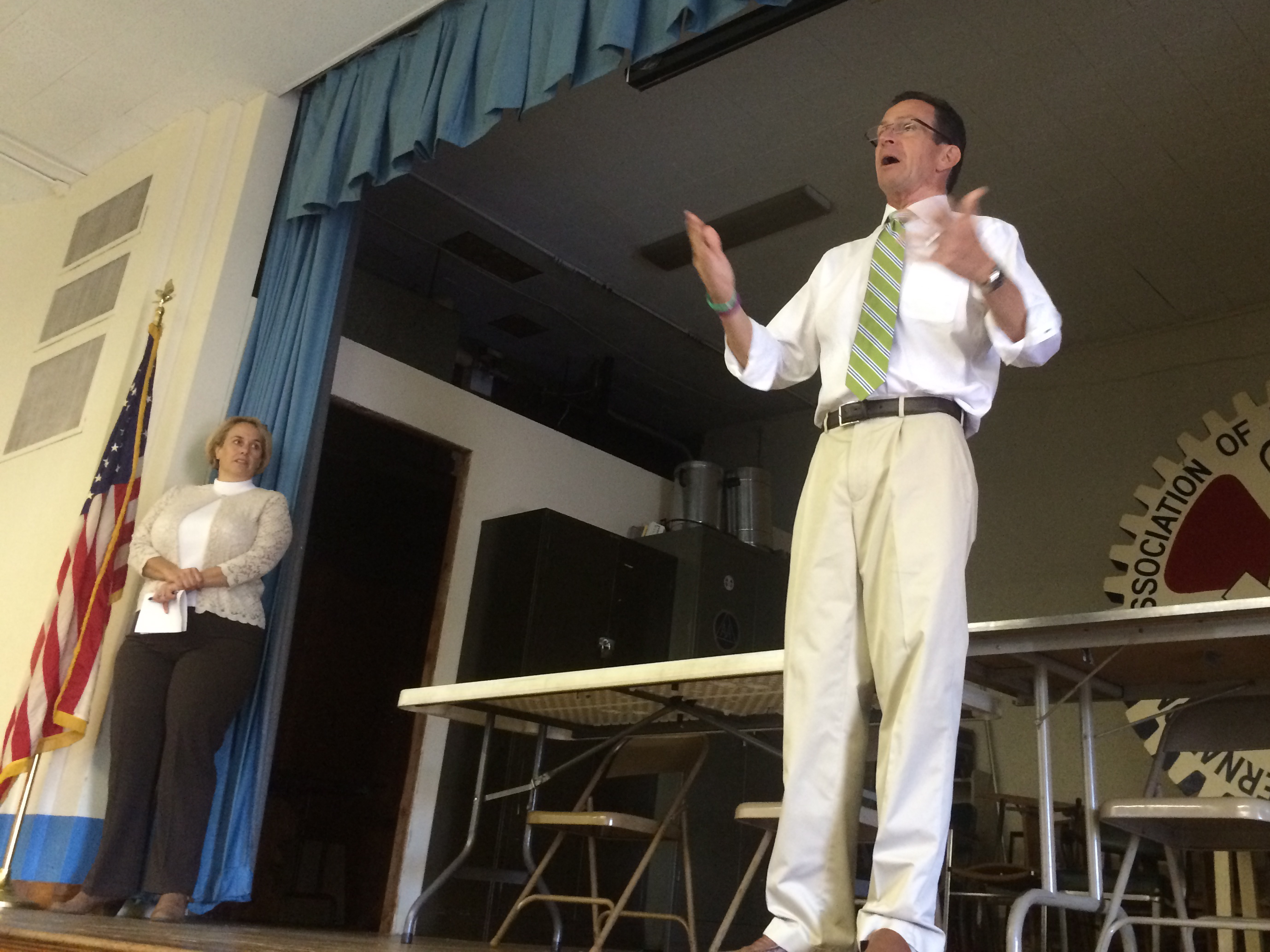 East Hartford – On a late summer morning, while a union audience sipped coffee and nibbled on breakfast sausage, Gov. Dannel P. Malloy shed his sports coat and climbed onto the stage at a union hall across from the sprawling Pratt & Whitney jet-engine plant.

They rose and greeted him with sustained applause, a bracing tonic for a candidate staring hard at Labor Day, the calendar’s reminder that time and politics are pitiless. Forty-six months after a tick-tight victory, with polls showing a state stubbornly divided on his leadership, Malloy has just over two more months to close the deal on re-election.

Unions can’t promise Malloy a win just by being with him. But of the few certainties in the business of campaigns and elections, count on this: Malloy, the first Democratic governor of Connecticut in a generation, is a lock to lose to Republican Tom Foley without them.

“Walk the streets. Make the telephone calls,” Malloy asked. “Let’s make sure we have every conversation we can. Every door gets knocked on. Let’s make sure we continue the progress we’ve made over the last 3 ½ years in a second term – a stronger and better Connecticut, not just for some.”

By showing up at breakfast, the men and women before him, including public employees who cursed him in 2011 after he demanded $1 billion in concessions, were promising their votes. But Malloy doesn’t just need their votes, he needs their voices and their passion. And those things probably can’t be accurately measured until after 8 p.m. on Nov. 4.

“These are the activists and leaders,” said Lori J. Pelletier, the top leader of the Connecticut AFL-CIO, looking at the breakfast crowd. “They are going to bring the message home.”

That message goes something like this: Love the guv, fear Foley or find some mix of the two. Just believe that the Democrat you know is safer than the Republican you don’t. And tell your friends and co-workers.

Pelletier says the unions are happy to play guilt by association, pointing to Republican governors like Scott Walker of Wisconsin and Chris Christie of New Jersey, who have balanced budgets by warring on public employees.

Wyman, who attended the breakfast, enjoys some of the warmest relationships with unions in the state. Palmer preceded Peters as an AFT-Connecticut president and AFL-CIO vice president.

Working not to be feared

Foley, the Greenwich businessman and Republican nominee, has tried mightily to convince state employees he is no one to be feared. He said he believes the rank and file will not fall behind their leaders, not this year.

“I want to be the best governor Connecticut’s ever had, and you are not going be a great governor unless you have the state work force believing in you and confident they are going to be served well following your lead,” Foley said in an interview. “I learned this in the business world, you have to have the workers on your side.”

But Malloy told his audience in East Hartford that Foley cannot be believed, the same message Pelletier, Peters and other delivered at the AFL-CIO convention in June, undermining Foley’s overture.

Four years ago, Foley ran on a promise he could erase a projected deficit of more than $3.5 billion without new taxes or devastating cuts. The promise makes labor wary in 2014. 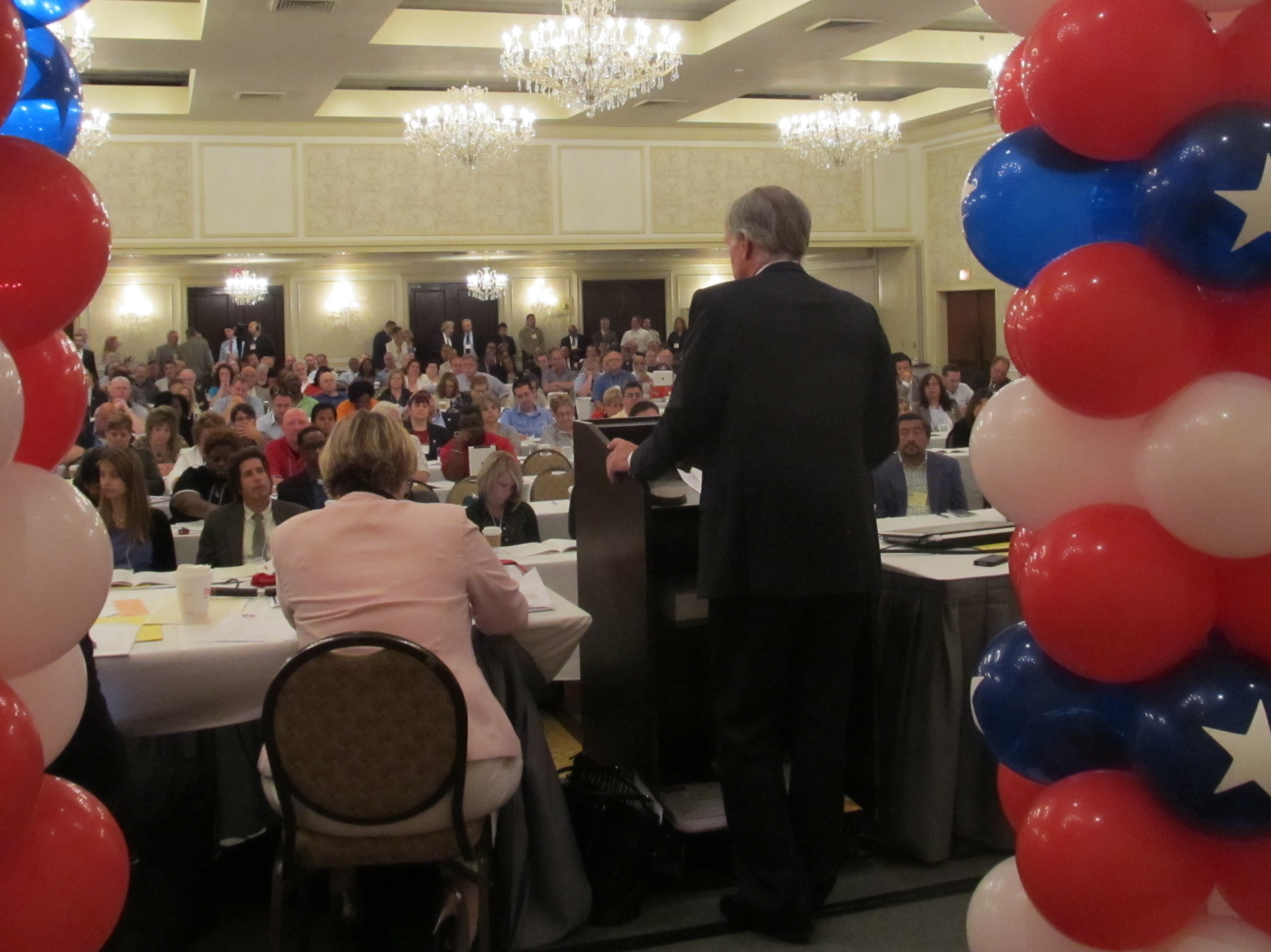 Tom Foley addressing the AFL-CIO in June, shortly before the federation endorsed Malloy.

Malloy raised taxes by $1.5 billion and demanded concessions, but he avoided layoffs, expanded health coverage and preserved municipal aid. By refusing to cut aid, Malloy says he stabilized local taxes, while saving the jobs of teachers, cops and firefighters.

Malloy jabbed at Foley, applying his own dose of guilt by association.

“His plans for the future sound an awful lot like John Rowland’s,” Malloy said.

Rowland was elected in 1994 as a different sort of Republican. Young, personable and politically gifted, Rowland made overtures to labor. But nine years later, they were enemies.

Malloy wants unions to remember the bitterness of those years, when Rowland laid off state workers. A lawsuit over those layoffs – the unions said he was trying to illegal break them – is now in settlement talks.

Malloy reminded them that Foley opposes a law that’s both modest and groundbreaking: Connecticut’s requirement that some private employers offer paid sick days. The time can be counted against any paid time off, and manufacturers are exempt. But Connecticut was the first state to adopt anything like it.

Every union member has those benefits and more, but he told them the law is a bare-bones benefit for service workers, just is the law he signed that will raise the minimum wage in steps to $10.10 by 2017.

“The people we represent are worth fighting for, they are,” Malloy said. “They are our brothers and sisters, our uncles and aunts. They live next door.”

Malloy looked toward David Roche, who represents the building trades and talked about the jobs created, partly driven by public transportation projects, including the much-ridiculed Hartford-to-New Britain busway.

Some of the trades now have 100 percent employment and are taking on apprentices for the first time in years, Malloy said.

He pointed to Pratt & Whitney across the street. A deal signed with the company’s parent, United Technologies Corp., offers $400 million in tax credits in return for $500 million in investments in the state, deepening the roots of a company whose CFO had suggested in a Wall Street conference call that Connecticut was no place to do business.

“We have a whole new relationship with the state’s largest employer,” Malloy said.

Off to the side stood Peters, the president of AFT-Connecticut, which represents local teachers, public and private health-care workers, and state employees.

Her teachers have felt little love for Malloy since he proposed tenure reform by asserting that the benefit of lifetime employment could be won simply by showing up. His education commissioner, Stefan Pryor, a charter-school co-founder, never clicked with the unions.

Pryor recently announced he won’t be back if Malloy is re-elected. And on Wednesday, in his first debate with Foley, Malloy apologized for the tenure remark.

“That was a wow moment for me, honestly,” Peters said. “It wasn’t scripted. It wasn’t planned. It was sincere.”

“It’s up to us. Labor has to win the election for Gov. Malloy and Lt. Gov. Wyman,” Roche said.

Malloy did not dispute the importance of labor. But after winning by half a percentage point in 2010, the governor laughed when asked if it was make or break

“In close elections,” he said, “everything is make or break.”