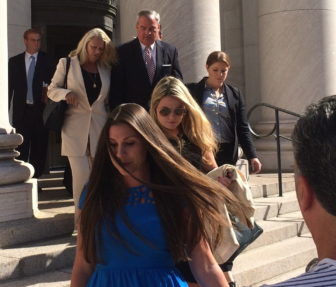 John G. Rowland exits court with his wife, Patty, preceded by his daughters.

New Haven – Mark Greenberg, a Republican seeking the 5th Congressional District seat for the third time in six years, testified Wednesday in U.S. District Court that former Gov. John G. Rowland offered himself as a consultant to his first race on one unusual condition: Rowland wanted to be paid through Greenberg’s businesses or his animal charity, not his campaign.

And Rowland, who was trying to rebuild his life after 10 months in prison on corruption charges that forced him from office in 2004, wanted to be paid handsomely: At least $720,000 to work for Greenberg through the 2010 election, and to stay on his payroll for another year, with 90 percent of the fee due immediately if Greenberg canceled.

Greenberg said he rejected the offer, though he had trouble finding the nerve to tell Rowland personally.

The task was left to his campaign staff, whose members told Greenberg that Rowland’s public involvement would be toxic. Greenberg said he never seriously considered hiring Rowland, because of his criminal record and his demand that he be paid outside his campaign in violation of federal election law.

But his email correspondence with Rowland — who aggressively courted the candidate after an initial rejection in 2009, saying Greenberg’s only chance at victory was to hire him — continued to June 2010.

So began testimony in Rowland’s trial on seven counts outlined in a dense indictment in which the government makes one essential claim: Rowland twice conspired to secretly act as a campaign consultant after his release from prison, including once while serving as the afternoon host on the state’s most popular AM radio station, 50,000-watt WTIC.

Once a decade for the past 40 years, Rowland has made singular demands on Connecticut’s attention as his career rose and fell with perfect symmetry: Elected a congressman at 27 and a governor at 37, only to become a felon at 47 and, now, face new corruption charges at 57.

Assistant U.S. Attorney Liam Brennan told the jury in an opening statement that the government would show that Rowland’s pitch to Greenberg and a similar offer two years later to Lisa Wilson-Foley, a candidate for Congress in 2012, were attempts to secretly work as a campaign consultant.

“And you’ll hear from John Rowland himself as he speaks to you through e-mails in evidence,” Brennan said.

Though Greenberg refused the offer, the pitch to Wilson-Foley was accepted, albeit at a more modest fee of $5,000 a month. Rowland was paid not by Wilson-Foley’s campaign, but by the nursing home business of her wealthy husband, Brian Foley. The $35,000 in fees Foley paid Rowland should have been listed as campaign contributions to his wife’s campaign, the government contends.

In both campaigns, Brennan said, Rowland was attempting to structure a consulting arrangement in a way that would deprive voters, the press and opponents of vital information: Who is paying for a campaign? In 2012, Rowland presumably had another reason to keep his consulting secret: He was then a host on WTIC-AM.

Reid H. Weingarten, the former governor’s lawyer, told the jury that Greenberg was mistaken and that Foley, who had been caught in other campaign finance violations, would testify against Rowland to save himself from a felony prosecution. Foley and his wife have pleaded guilty to misdemeanors.

Weingarten, whose national reputation as a trial lawyer drew an audience of law students to the trial’s first day, said the government didn’t give Foley and Wilson-Foley a slap on the wrist – it applied something “more like a big wet kiss.”

Weingarten said it was foolhardy to think anyone could have thought that Rowland’s involvement in a campaign for his old congressional seat, including such public activities as outreach to convention delegates, could remain secret.

“John Rowland cannot be hidden. He was totally out there, hustling the delegates,” Weingarten said of Rowland’s work for Wilson-Foley’s 2012 campaign. “There is no hiding John Rowland.”

Weingarten predicted that once he exposes Brian Foley, who is a key government witness, “the case will crater.”

Greenberg, 60, of Litchfield came across as a reluctant witness at times. After three tries, he has won the Republican nomination for Rowland’s old seat. Instead of campaigning, he is spending late summer days in U.S. District Court, answering questions about his relationship with a disgraced former governor.

He testified that he was introduced to Rowland in the summer of 2009 by Vincent DeRosa, a former state trooper who rose from Rowland’s security detail to the chief of homeland security during the Rowland administration. 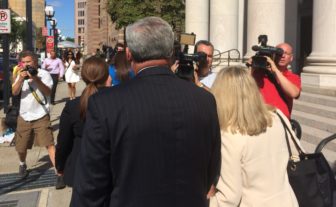 Rowland his wife, Patty, face the cameras at day’s end.

At the time, Greenberg was considering a run for the U.S. Senate seat then held by Chris Dodd. In a breakfast meeting at a diner, Rowland told him he had a better chance running for the 5th Congressional seat.

He met again with Rowland in Bloomfield to show him the no-kill dog shelter then under construction by his personal charity, the Simon Foundation. Rowland gave him an ambiguous personal services contract that would have obligated the former governor to provide consulting services, including marketing and public relations advice, to Greenberg.

On cross-examination, Weingarten asked Greenberg if that broadly written contract could have covered political advice. Greenberg replied that it could have, but that wasn’t what Rowland proposed in conversations.

He wanted to be paid for campaign services, but only if the payments were funneled through the Simon Foundation or Greenberg’s real estate business.

Another aspect of a personal services contract went unexplored: Campaigns are temporary and can default on debts, leaving creditors with little recourse. With a personal contract, Greenberg would have been personally liable to Rowland.

Rowland wore a dark suit, white shirt and red-and-white striped tie, a white kerchief peeking from his breast pocket. He sat fidgeting with a pen as Senior U.S. District Judge Janet Bond Arterton gave jurors their initial instructions and the lawyers made their opening arguments. He occasionally wrote on a legal pad during Greenberg’s testimony.

During breaks, he turned to his wife, Patty, and his two daughters, who sat behind him in the front row. They were among about 40 spectators and a half-dozen reporters in the small courtroom. A few more sat on chairs brought into the entry vestibule.

Weingarten asked the jurors to keep an open mind as they get a close peek at the inner workings of the political system.

“You’re going to see how the sausage is made,” he said. He warned that their reaction might be, “Yuck.”

He told them they will hear some details about Rowland’s previous clash with federal authorities. One of the witnesses will be Mike Clark, the agent who supervised the first case against Rowland, then retired and eventually found himself running for Congress in 2012 against Greenberg and Wilson-Foley.

“You may be disappointed in him,” Weingarten said of Rowland. “You may even feel betrayed. These are normal feelings.”