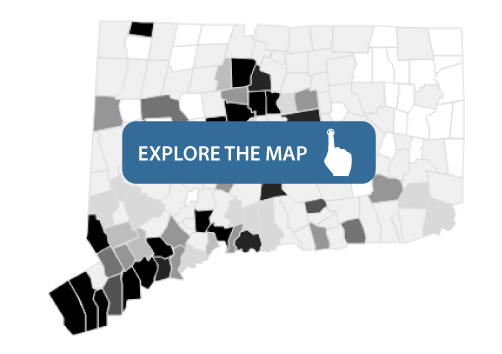 Want to follow the flow of cash to Connecticut’s Democratic and Republican parties? Start in Greenwich, then drive next door to Stamford. In those two communities, you’ll find the sources of one in every five dollars contributed in itemized individual contributions since Jan. 1, 2013.

Or, you can sit at your computer and roll your cursor across The Mirror’s new Money Map, an easy tool to see where the two parties have been getting their money: $4.7 million in itemized contributions, and $5.3 million total.

Who gives? Well, nearly $900,000 came from folks with the titles of CEO, principal and president. And no, principal doesn’t refer to the educator who runs your child’s elementary school. We’re talking about the principals of companies, people like Edgar Bronfman of Warner Brothers Music Group and Ross H. Hollander of Hartford Beer Distributors.

Why do they give? Sorry, the State Elections Enforcement Commission and Federal Election Commission don’t ask that question, and those agencies are the source of the data that on which the Money Map is built.

But we can guess.

Much of the money comes from employees of companies that do business with the state, are regulated by the state or both. By dollars, the top five givers work for Northeast Utilities, the Simon Konover Company, Winstanley Enterprises, Purdue Pharma and HAKS.

Konover is a major state landlord, whose tenants include the state treasurer and attorney general. Winstanley is a developer with a New Haven project whose major tenant is a recipient of state aid. HAKS, an engineering and construction management firm, is a major state contractor.

More information about some of those donors can be found at the bottom of the page in The Mirror’s previous stories about campaign finance.

Two married couples from Greenwich are the top four donors to each party. On the Democratic side, Jonathan Sackler and Mary Corson contributed $76,000, while Vince and Linda McMahon gave $75,000 to the state GOP.

Sackler, who is a director of Purdue Pharma, and his wife are major backers of the charter school movement. The McMahons, who made their fortune with their wrestling conglomerate, WWE, are major GOP donors.

In fifth place is Dr. Nicholas V. Perricone, the celebrity dermatologist, health marketer and author. He gave the Democrats $30,000.

Under state and federal law, donors can give a maximum of $10,000 in each calendar year to each of the parties two accounts, one covered by state rules and another by federal rules. So, Sackler and Corson still can give another $2,000 each, while the McMahons can go another $2,500 each.

State contractors, however, can only give to the federal accounts, not the state accounts.

The Money Map and associated interactive charts allow you search all donations or filter by political affiliation and state and federal accounts. Click on the magnifying glass symbol by each entry on the charts, and a window opens with more data about contributions from an individual donor, community, job title or employer.

The tools have their limits.

So do the data collected by the SEEC and FEC. For example, the FEC does not require donors to disclose whether they are state contractors or are regulated by the state.

The Money Map only covers the state parties, not their nominees for governor, Democrat Dannel P. Malloy and Republican Tom Foley. Both are participants in the state’s voluntary system of publicly financing campaigns.

Each were allotted $6.5 million for their general election campaigns. To qualify, they had to raise $250,000 from donors who could give a maximum of just $100.