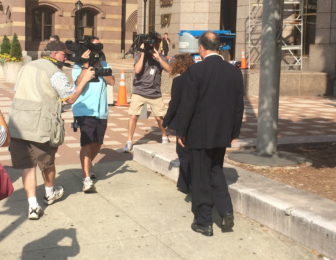 New Haven – The first manager of Lisa Wilson-Foley’s congressional campaign testified Friday that publicly hiring John G. Rowland as a campaign consultant would have been akin to “handing her opponents a loaded gun and saying, ‘Shoot me.’ ”

Tiffany Romero Grossman told a jury in U.S. District Court that it fell to her in 2011 to dissuade Wilson-Foley from hiring her friend, Rowland, whom Grossman considered politically radioactive because of his resignation as governor in 2004 and his subsequent guilty plea to federal corruption charges.

“As delicately as I could, as friendly as I could, to be respectful of her friendship,” Grossman said, “I told her that would cause big problems for her.”

Grossman’s testimony set the stage for Brian Foley, the candidate’s husband, to take the stand and explain why he ultimately hired Rowland off the books for his wife’s campaign, a violation of federal campaign finance laws. Foley briefly testified Friday and will return to the stand Monday.

Rowland, 57, the former governor and congressman, is accused of conspiring with Foley and Wilson-Foley to illegally hide his role as a paid consultant to Wilson-Foley’s campaign for the open 5th Congressional District seat in 2012.

Rowland says he was paid by Foley to provide consulting services to Foley’s nursing home business and that his work on behalf of Wilson-Foley was done on a volunteer basis out of friendship. Foley and Wilson-Foley have pleaded guilty in the case and are cooperating with the U.S. attorney’s office.

Foley testified that Rowland made a sales pitch to him and his wife at the Farmington Marriott in September 2011, telling the couple that as a former congressman from the 5th District he was uniquely qualified to advise Wilson-Foley’s campaign.

“He read from handwritten notes, went into great detail about how he could be helpful to the campaign,” Foley said. He and his wife left the meeting impressed, but also worried about the risk of hiring a felon. They resolved to seek the advice of staff.

Grossman left the campaign about the time that Wilson-Foley broached the idea of giving Rowland a formal, public role with the campaign in September 2011. Her departure was prompted by a difficult pregnancy with a due date on the eve of the 5th District nominating convention the following May.

She described herself as being comfortable accepting Rowland’s occasional advice and fundraising help, reasoning that her candidate’s friendship with Rowland was well-known and some limited involvement was reasonable. But she drew the line at hiring him.

“When you hire people in your campaign, they become representatives of you. That’s really important. Now, that would matter to people. Who is she hiring? Who is representing her?” Grossman said. “I can explain away a fundraiser or a picture, but hiring somebody is a whole different ballgame.”

Grossman said a formal role for Rowland would have given another candidate, retired FBI special agent Mike Clark, a boost. Clark, who had supervised the investigation of Rowland, was struggling to develop a following at the time.

“If Lisa had hired Mr. Rowland, Mike becomes very relevant in the race,” she said.

She also saw bigger problems in the general election, had Wilson-Foley won the Republican primary.

“The television ad writes itself,” she said.

Assistant U.S. Attorney Christopher Mattei asked, “What was her reaction?”

“I don’t recall her saying yes or no,” Grossman said. “She was sometimes difficult to give advice to.”

How strong was Grossman’s opinion about the danger of hiring Rowland?

Trial ended for the day before Foley could go deeply into how he and his wife decided to hire Rowland through Foley’s nursing home chain, Apple Rehab.

The former governor focused on how Wilson-Foley would match up with the expected Democratic nominee, state House Speaker Christopher G. Donovan of Meriden, a former labor organizer: “Donovan could not be a better opponent, left of left.”

But Donovan’s campaign foundered in the same courthouse where Rowland is on trial. It was there that his campaign manager pleaded guilty and his campaign finance director was found guilty of soliciting illegal campaign contributions.

Weakened by scandal, Donovan lost the Democratic primary to Elizabeth Esty, who won the seat that November.