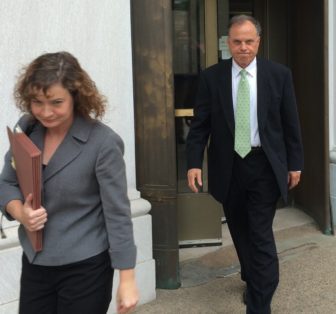 New Haven – It seemed there was little that Brian Foley, wealthy owner of a nursing home chain, wouldn’t do to support the congressional ambitions of his wife, Lisa Wilson-Foley. He made an illegal $500,000 contribution, then used his children, sister, niece and nephew as conduits to further evade contribution limits.

And, as Foley testified Monday in U.S. District Court as the pivotal witness in the corruption trial of former Gov. John G. Rowland, he also concocted the plan to provide his wife with Rowland’s political consulting services without having to disclose Rowland on her campaign finance reports as a paid adviser.

After meeting with Rowland in September 2011, when the Republican former governor and congressman made an aggressive pitch to become the main consultant to the campaign, Foley said he and his wife debated the pluses and minuses of hiring a politician who pleaded guilty to federal corruption charges and went to prison after resigning as governor in 2004 in the face of impeachment.

“We came to the conclusion he could be very helpful to the campaign, but we were concerned about the negatives,” Foley told a jury.

He said he sent word to Rowland through his wife about signing on as a consultant to his nursing home company, Apple Rehab. Foley said Rowland’s reply came by email: “Brian, had a brief chat with Lisa. I get it. Let’s you and I meet.”

With the government noncommittal about its intention to call Wilson-Foley to testify, the prosecution of Rowland falls heavily on the shoulders of Foley, a wealthy 62-year-old entrepreneur whose comfortable life took a momentous turn after his meeting with Rowland in 2011.

Foley admitted to freely and repeatedly violating campaign finance laws, which limited his personal contributions to his wife’s campaign for the GOP nomination for the open 5th Congressional District seat to $7,500 over 2011 and 2012. He shifted $500,000 in his assets to his wife, who could give without limit to her own campaign.

Reid H. Weingarten, who is leading Rowland’s defense, expressed surprise in court when the government told Senior Judge Janet B. Arterton that it would use Foley to authenticate emails and contracts being used as evidence since Wilson-Foley might not testify. Assistant U.S. Attorney Liam Brennan gave no reason why Wilson-Foley might not take the stand.

Foley and his wife have pleaded guilty to misdemeanor charges related to their admission that Foley provided an unreported donation to the campaign – namely Rowland’s consulting services, because Rowland’s bill was paid by Foley through a contract with Apple’s attorney.

Rowland is charged with seven felony counts, including conspiring with Foley and Wilson-Foley, as well as obstructing justice and causing an illegal contribution to be made. He says he performed legitimate work for Apple, while volunteering for the Wilson-Foley campaign.

Foley’s credibility is central to the government’s case, because Rowland did do some work for Apple and volunteered to help Wilson-Foley in 2010, when she ran for lieutenant governor. For the jury to believe that the Apple work was a cover for Rowland’s real duties as a campaign consultant in 2012, they must believe Foley.

In a cross-examination of Foley that began late Monday and will continue Tuesday morning, Weingarten worked to establish the cooperating witness as a criminal who is incriminating Rowland under the terms of a deal with the government for leniency on behalf of himself and his wife.

“The whole point here is you were willing to engage in this criminal activity because you didn’t think you would get caught. Is this how you operate in the world generally?” Weingarten asked.

Foley said it was not.

Foley testified earlier Monday during questioning by the prosecution that the contract to advise Apple was a sham, a step he took knowing he was circumventing federal election laws that require the public reporting of all expenditures and contributions by and to a congressional campaign.

Foley said he came up with legitimate duties for Rowland and ultimately left Brian Bedard, who oversaw day-to-day operations at Apple, with the final call on whether Rowland had completed the work for which he was being contracted.

“I tried to legitimize it in many ways, so if it was ever examined, it would pass muster,” Foley said.

He described consulting with an elections lawyer at Patton Boggs in Washington, D.C., about the propriety of hiring Rowland as a consultant to Apple while Rowland was advising Wilson-Foley’s campaign. The reply: Rowland, like any Apple employee or consultant, had the right to volunteer on her campaign.

The lawyer at Patton Boggs was not told, however, that Rowland was being hired by Apple as a cover, nor were his employees at Apple, Foley said.

Foley said he took pains to avoid saying anything in writing that would expose the contract as a sham.

“In all the evidence, you’ll see nothing in that regard from me,” Foley said. “I was very careful not to use any words to acknowledge this was for the campaign.”

In a meeting with Rowland, Foley said he and the former governor talked about areas in which Rowland could credibly act as a consultant to Apple. They discussed a proposed state policy of trying to shrink the nursing home business, unionization issues and the company’s need for a new lobbyist.

“I tried to find areas in which Mr. Rowland had experience,” Foley said.

Rowland recommended the hiring of Tom Ritter, the former Democratic speaker of the state House, as the company’s lobbyist. Rowland attended a meeting when Foley and Apple officials interviewed Ritter, a partner at the legal and lobbying firm of Brown Rudnick.

But Foley also took steps that called into question the legitimacy of the arrangement. He said he accepted a proposal by his lawyer, Christian B. Shelton, to achieve some further distance between Rowland and the campaign: Rowland contracted as a consultant with Shelton, though invoices would go to Apple. Shelton paid Rowland and was reimbursed by Foley through one of his realty companies.

“We felt it would never be discovered,” Foley said.

Foley was Inc. Magazine’s entrepreneur of the year in 1989, a reflection of the successful nursing home business he began building at age 24. The magazine named Apple as one of the fastest-growing privately held companies in America, with annual revenues of $100 million and 3,000 employees.

The same year, Foley’s relationship with state Senate President Pro Tem John B. Larson, D-East Hartford, now a congressman, came under FBI scrutiny after Foley gave his insurance business to Larson’s agency at a time when the legislature was considering a funding bill crucial to the industry. The investigation ended without charges.

Foley, who grew up in Hartford, graduated in 1974 from the University of Connecticut with a degree in business administration. He also holds a master’s degree in public health from Yale University. He was inducted into the UConn School of Business hall of fame in 1998.

He and his wife live in Simsbury. They are the parents of six.

Wilson-Foley sought office for the first time in 2010, when she ran for the GOP nomination for lieutenant governor, losing a primary to Danbury Mayor Mark Boughton. The following year, she began establishing a campaign for he open seat in the 5th Congressional District.