Washington – Half a century ago, after gargantuan struggle, Congress approved legislation that outlawed discrimination based on race, color, religion, sex, or national origin — a landmark moment in the nation’s civil rights struggle.

Now, with a $500,000 grant, the Connecticut-based Newman’s Own Foundation has helped fund a special exhibit at the Library of Congress that includes more than 200 items and 70 audio-visual recordings illustrating the centuries of struggle for racial equality of African Americans and other minorities.

The exhibit, which opens to the public for the first time today, traces the civil rights struggle from the nation’s beginning until President Lyndon Johnson signed the Civil Rights Act. 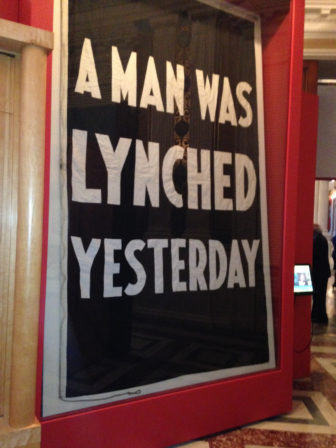 This flag from the 20’s flew over the NAACP headquarters.

The collection includes a wide variety of mementos from the nation’s history on race relations, including slave contracts and the flag that once waved outside of NAACP headquarters in New York, emblazoned with “A Man Was Lynched Yesterday. ”

There is also the chilling recording of “Strange Fruit” by Billie Holliday and chronicles of the “Freedom Rider” movement that first originated in 1947.

Newman’s Own CEO Robert Forrester said he first visited the Library of Congress a few years ago at the invitation of Rep. John Larson, D-1st District, and decided the company’s foundation should help fund the International Summit of the Book in 2012, a gathering of leaders in academia, libraries, culture and technology.

“When I heard of plans for the [civil rights exhibit] I asked, ‘Can we support this?’” Forrester said during a reception at the Library of Congress on the eve of the exhibit opening. “We’re trying to use the power of Newman’s Own to empower people.”

He said Paul Newman, the actor who founded the company and died in 2008 at his home in Westport, would have been pleased to help, since he was an effective supporter of the civil rights movement.

“He was not a political person. He just did not feel it was right for anyone, anywhere, to be denied opportunity,” Forrester said.

The History Channel also contributed to the exhibit’s funding and has filmed two documentaries for the event, one on the civil rights struggle in the United States and another on the impact of that movement in other nations. 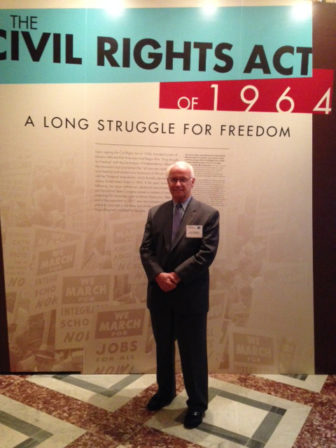 Robert Forrester, CEO of Newman’s Own Foundation, stands at the civil rights exhibit his foundation helped fund at the Library of Congress.

“To see me on the History Channel movie with other [civil rights leaders] almost made me cry,” said Rep. John Lewis, D-Ga., who was badly beaten during a civil rights march on the Edmund Pettus Bridge near Selma, Ala. “The struggle is ongoing.”

Lewis was one of several members of the civil rights movement, including Julian Bond and Jesse Jackson Jr., to attend the reception. Lynda Johnson Robb was also there to represent her father’s role in the passage of the Civil Rights Act.

The Newman’s Own Foundation is also funding a commemoration of the Civil Rights Act at the University of Hartford.

Called “Empowering Change,” the week-long series of exhibits, lectures and panel discussions opens Sept. 14 and will focus on past and ongoing racial conflicts. University of Hartford President Walter Harrison said various academic departments will approach the subject in their own ways. The College of Engineering, for example, will feature a speech by the nation’s first black astronaut, Guion Bluford.

Larson said the hope is that other universities across the nation follow up with their own efforts.

“We have to make this more than a static exhibit,” he said.

(The Newman’s Own Foundation is also a sponsor of The Connecticut Mirror.)