John G. Rowland and wife, Patty, led by his two daughters as the trial opened.

New Haven – The case against former Gov. John G. Rowland went to the jury at 3:37 p.m. Thursday after a day of argument about whether Rowland, the political wunderkind who became a felon, conspired to illegally hide work for a congressional candidate by accepting a consulting contract from her husband’s company.

In his 90-minute summation, defense lawyer Reid Weingarten struck a conversational tone with the jury, asking them to see Rowland’s eagerness to consult on congressional campaigns in 2010 and 2012 as a bid to get back in the game of politics after a corruption scandal forced his resignation as governor 2004.

“You love him or hate him. That’s just the deal,” Weingarten said, but he ridiculed the government’s contention that Rowland had any thoughts of keeping his role in any campaign a secret. “He can’t make a move in Connecticut without everybody knowing it. That’s just the truth.”

Weingarten insisted that everything Rowland did for Lisa Wilson-Foley’s campaign and her husband’s company, Apple Rehab, was “100-percent Kosher” and that Rowland’s mixing of business and campaigning was normal politics, not a conspiracy.

The defense lawyer conceded that Brian Foley, the owner of Apple, undoubtedly hired Rowland to consult for the nursing home chain in the hope that he also would play a major volunteer role on his wife’s campaign for the open 5th Congressional seat in 2012.

“And there is absolutely nothing wrong with that in this world,” Weingarten said.

Assistant U.S. Attorney Christopher Mattei scoffed at any suggestion that Rowland’s dealings with Foley and Wilson-Foley were anything but corrupt: He was paid for his political acumen, not his regulatory or business advice.

“What was he selling? ‘I can get you elected,’ ” Mattei said. “Ladies and gentlemen, you know what happened here. Use your common sense.”

Weingarten insisted that Rowland offered Foley valuable advice about the changing regulatory environment around nursing homes and repeatedly showed interest in Apple Rehab’s challenges during his time as a consultant.

“If this was all a sham, if this was B.S., why would he care?” Weingarten asked.

Mattei said Rowland was trying to apply a patina of legitimacy to an illegal conspiracy when he showed interest in Apple’s operations during the six months he was under contract.

“This isn’t politics. This is about hiding from the public what the public has a right to know,” Mattei said. “That’s not politics; that’s a crime.”

Rowland is charged in a seven-count indictment arising from what the government says were attempts by Rowland to be secretly paid as an adviser to two congressional campaigns in violation of federal laws requiring the disclosure donations to and expenditures by campaigns for federal office.

Over two election cycles in 2010 and 2012, Rowland approached two independently wealthy business executives, Mark Greenberg and Wilson-Foley, who were running or about to run for the 5th Congressional District seat that Rowland first won as a 27-year-old in 1984.

To both candidates, Rowland promised help navigating the path to election, through fundraising and seeking the support of convention delegates, to media and advertising strategy. But both were reluctant to openly hire a politician who resigned as governor and pleaded guilty to corruption charges in 2004 — and Greenberg was put off by Rowland’s demand for a personal services contract worth more than $700,000. 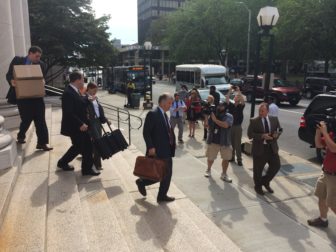 The first of the seven counts charges Rowland with drafting a sham consulting contract with Greenberg that would have paid him a monthly fee of $35,000 through Greenberg’s animal-welfare charity, the Simon Foundation. Greenberg talked to Rowland for 10 months before finally rejecting the offer, which Rowland suggested would have included fundraising for the foundation’s animal shelter.

“This whole thing is a sham,” Mattei said. “Who is going to pay somebody $35,000 a month to raise a little money for an animal shelter?”

Greenberg testified that Rowland insisted on being paid through the foundation or one of Greenberg’s business entities, not the campaign.

The remaining six counts are related to what the government says was Rowland’s conspiracy with Wilson-Foley and her husband, who is the sole owner of Apple Rehab. After Wilson-Foley refused to hire Rowland to run her campaign, her husband signed him to a consulting contract worth $5,000 a month.

Weingarten said much of the case rests on a single question.

“Has the government proven beyond a reasonable doubt that John Rowland got a fake, make-believe job at Apple so that he could work on Lisa Wilson-Foley’s campaign?  If the answer is no, Counts Two through Seven are gone,” he said.

As for the contract he proposed to Greenberg, who is now the Republican nominee in the 5th District, Weingarten said the document itself was not evidence of an effort to deceive the Federal Election Commission. If Greenberg had hired Rowland as a consultant, it would have been up to him to report to the FEC whatever he paid Rowland for campaign advice, he said.

“Let’s get real,” Mattei said during a rebuttal, standing at the edge of the jury box.

The prosecutor said Weingarten glossed over several inconvenient facts, starting with the timing of Foley’s hiring Rowland: He extended an Apple contract to Rowland immediately after Foley and Wilson-Foley concluded it would have been impolitic to place a politician with a felony record on the campaign payroll.

Rowland responded with an email to Foley: “I get it.”

Rowland became a dominant voice at Wilson-Foley’s campaign as soon as he had the deal with Apple, Mattei said. The timing was no coincidence, he said.

“Give me a break,” Mattei said.

The jury ended deliberations for the day at 5 p.m. and will return Friday at 9 a.m.