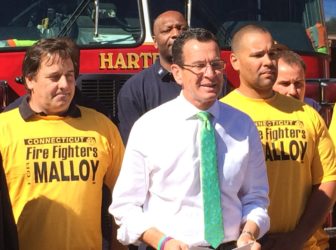 Trailing in the polls, Gov. Dannel P. Malloy is pursuing a shrinking pool of uncommitted voters with a TV ad that presents a softer side of the governor and a line of attack on the campaign trail that portrays Republican Tom Foley as anti-worker and anti-middle class.

After a noisy, sustained volley of negative ads, both campaigns are airing quieter spots aimed at female voters, especially those with school-age children. Foley’s began airing Monday, while Malloy’s went up Tuesday Both show the men reading to or interacting with young children.

But Malloy is hitting harder on the ground as he goes softer on the air. On Monday, the first-term Democratic governor used a sparsely attended news conference to accept the endorsement of the Uniformed Professional Fire Fighters Union as an opportunity to attack Foley’s business dealings.

“Every time Tom Foley has had the opportunity to choose between himself and others, he’s chosen himself and come away with millions, actually tens of millions of dollars,” Malloy said, standing with firefighters outside a firehouse on Blue Hills Avenue in Hartford.

Malloy was playing off a column published Sept. 17 in The Day of New London about Foley, who purchased and ran three companies, winning a three-year showdown with a union after buying T.B. Wood’s Sons Co., a manufacturing company in Pennsylvania. Long after the union broke, Foley sold the business, with his shares worth about $40 million.

One of the other companies was The Bibb Co., a textile company that he expanded through purchases, only to see it falter after losing market share. He lost control of the company after defaulting on loans, and the Bibb eventually closed after creditors took it over.

“Every time Tom Foley had an opportunity to choose between himself and others, he’s chosen himself. His animus toward unions and towards the middle class is well known,” Malloy said.

The governor, who trailed Foley by six percentage points in a Quinnipiac University poll released two weeks ago, betrayed frustration with the press, saying the public doesn’t know enough about Foley, whom he narrowly defeated in 2010.

“I think you guys have let him off the hook, quite frankly. This is a guy who spent the better part of three years talking about Connecticut having ‘a Wisconsin moment’,” Malloy said. “He wasn’t talking about cheese, for God’s sakes. He was talking about breaking unions, changing the laws.”

Foley declined to respond to Malloy’s attacks, evidence he sees himself as a front runner who can only lose ground by trading barbs with the governor.

Malloy’s tenuous standing with voters has been a constant since he took office in January 2011 as the first Democratic governor in 20 years. As a new governor, Malloy had to immediately confront the nation’s largest per-capita deficit and a slow pace of job growth after the great recession of 2008.

He raised taxes by $1.5 billion, but he maintained state aid to cities and towns, which he says took pressure off municipalities to raise property taxes, cut the jobs of teachers and other municipal workers or do both.

His new ad refers to both the challenges he faced as a new governor:

As a child, Dan Malloy overcame severe learning disabilities. Got through school listening to books on tape for the blind. With the help of great teachers, Malloy graduated from college with honors, then got his law degree.

As governor, Malloy faced the great recession in a way others did not. Refusing to cut education, instead taking the hard route, making tough choices so we could invest millions more in local schools.

He got his chance. And he won’t rest until every Connecticut child gets theirs.

Malloy, 59, a former mayor of Stamford who won a three-way race with 49.5 percent of the vote, never has exceeded 50 percent in the key polling measures of job approval, favorability or deserves re-election.

His challenge over the campaign’s remaining weeks is to coax disaffected Democrats back into his column. In the Quinnipiac poll, Malloy had 77 percent of Democrats, while Foley had 82 percent of Republicans.

With men leaning heavily Republican this cycle, Malloy also needs to do better among female voters. Women tend to vote Democratic in Connecticut, but Malloy was only up seven points among female voters, while Foley was up 19 percent among men.