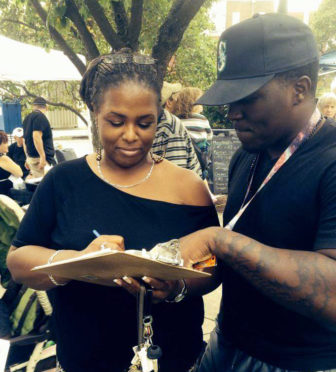 An Esty volunteer registers new voters in Danbury at the Caribbean Jerk Fest on Sept. 20.

On election night two years ago, supporters of Andrew Roraback, a Republican candidate for Connecticut’s 5th District seat, cheered and danced giddily at campaign headquarters when returns were announced showing a GOP edge in dozens of small towns.

But the mood turned somber very quickly when returns from the district’s cities came in. Elizabeth Esty, the Democratic candidate in the race, won New Britain, Waterbury, Danbury and Meriden, mostly by large margins. The urban votes, which included those of minority voters who lean heavily toward the Democratic Party, won Esty the election.

How many minority voters show up at the polls, and who they vote for,  is expected to make a difference again this year in the competitive races for the state’s 4th and 5th District congressional seats, where Democratic Rep. Jim Himes and Esty, respectively, will be trying to hold on to their jobs. They hope the tilt minorities have toward the Democratic Party helps them.

The lawmakers face Republican challengers Dan Debicella, who is trying to lure those voters to the GOP with his moderate stance, and, in the 4th, Mark Greenberg, who hopes his economic message wins them over.

No Obama bounce this year

In 2012, President Obama was at the top of the ticket, drawing minorities to the polls in Connecticut and across the nation. But he’s not on the ballot in this midterm election.

Gary Rose, head of the political science department at Sacred Heart University, said Esty will be trying to offset the predicted decline in interest among Democratic-leaning minority voters by appealing to GOP-leaning suburban and rural voters. “She’s reaching out to a different constituency,” Rose said.

Rose said Esty is also working to mobilize the minority vote. As she did two years ago, the lawmaker, a Congregationalist, has been attending black churches in her district.

Recently she spoke to members of the New Hope Baptist Church in Danbury, accompanied by Rep. James Clyburn, D-S.C., a member of the Congressional Black Caucus and the House Democratic leadership.

Esty said she “comes from a social justice background” because her grandmother and other relatives devoted themselves to the cause of civil rights. “This is authentic to me,” she said. 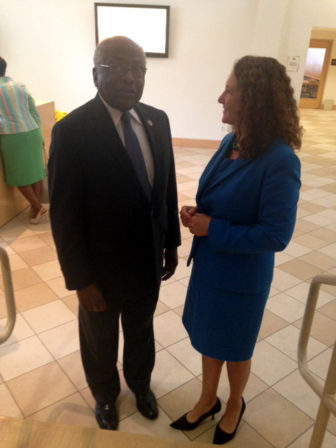 Clyburn, who traveled to Connecticut to help Esty two weeks before the 2012 election, said he traveled to Danbury this time “to get the voters in this congressional district to understand this race has consequences.”

Esty has also asked for help from Hispanic activists in her effort to reach out to Latino voters. (She pointed out that she doesn’t speak Spanish, which would help, “but it’s on my to-do list.”)

One of the few Latino elected officials in the 5th District, Meriden city council member Miguel Castro, is aiding Esty by phoning Latino voters in the district and urging them to go to the polls on Nov. 4. He is also part of a voter registration effort that targets Hispanics.

Esty also held a town hall in Meriden in July on a key issue for Hispanics – immigration. It was attended by Latino activists, including Carolina Bortolleto, who says she expects more from the lawmaker.

“I think Esty is very sympathetic on immigration issues, but she hasn’t taken a strong public stance,” Bortolleto said.

Challenger Greenberg’s campaign will be hoping that such apparent lack of enthusiasm – one that historically is reflected in low minority voter registration  — will continue, Rose said.

A study by the Connecticut Secretary of State determined that blacks and Hispanics usually register and vote at much lower levels than white voters. For example, in the last midterm election, in 2010, only 40 percent of black residents went to the polls, and only 23 percent of Hispanics.

“I worry about low turnout,” and its impact on the democratic process, Esty said. “We need more participation.”

Republican Greenberg’s campaign approach, meanwhile, has been to highlight the issue common to people of all racial and ethnic backgrounds.

“Mark does not target specific groups of constituents in terms of his message or outreach,” said Bill Evans, Greenberg’s campaign manager.

Republican Mark Greenberg addresses a problem common to all: jobs.

“Instead, he has spent many months talking to families and businesses across Connecticut about the issues that matter most to them: jobs and the economy,” Evans said. “Mark shares with them his message that a strong economy will help residents of the 5th District no matter where they live…”

Evans also said Greenberg “talks about his real-world experience as a job creator and a self made businessman who knows how the economy works, how the impacts of taxes and regulation can hurt or help businesses, and how the free market can grow the economy.”

Sylindia Cummings, a member of the African-American congregation who listened to Clyburn’s calls for the church-goers to go to the polls on Nov. 4, said she’s not sold on any candidate. A registered Democrat, Cummings, said she “needs to see what else [Esty] has to say.”

Joan Wright, another member of the congregation, is also undecided, but “thinking of supporting Esty. Having women in position of influence is important,” she said.

Petra Torres, a New Britain resident who was born in Puerto Rico, said she usually votes for Democrats because she favors their views on social and economic issues.

But she hasn’t made up her mind yet this year.

“‘l’ll listen to what they have to say, especially about the economy and problems like child abuse,” Torres said.

In the 4th, a bold position

In the 4th District race, Debicella, a Republican businessman from Shelton, has taken a bold stance for a member of his party on the issue of immigration.

He said he supports a broad bill, written by Democrats and approved in the Senate, that would provide millions of undocumented immigrants with a pathway to legal status.

The bill was ignored by the Republican-controlled House because most House Republicans oppose what they called the bill’s “amnesty” of those who they say entered the country illegally.

The immigration debate in Washington became even more polarized by the influx of thousands of unaccompanied minors from Central America this year.

Yet Debicella says “people who obey the law, pay taxes and have a job should have a path to citizenship.” He disagrees with the House GOP’s hardline position.

“We need people down [in Washington] who are willing to compromise,” he said.

That’s a good message when he goes door to door in Latino neighborhoods, because he says he’s often asked about his position on immigration.

Himes, meanwhile, is likely to make much of a vote Debicella cast in 2007, when the candidate was a member of the state senate. Like many Republicans, Debicella voted “no” on the legislation that allowed undocumented children to pay in-state tuition to attend college. The state measure is similar to a bill stalled in Congress called the DREAM Act.

Debicella ran unsuccessfully against Himes in 2010, doing well in the 4th District’s suburban areas and small towns. But Himes beat him badly in urban areas.

“We just need to do a couple of percentage points better in Bridgeport, Stamford and Norwalk,” Debicella said.

So he tells minority voters the story of his life – he is the son of a policeman and a secretary – and about his wife, who was born in Argentina.

“Her mother worked three jobs so that she and her brother could go to college,” Debicella said. “Latinos want to live the American dream.”

A master at minority outreach

Debicella, however, is running against a politician who some say has set the gold standard when it comes to outreach to minorities. 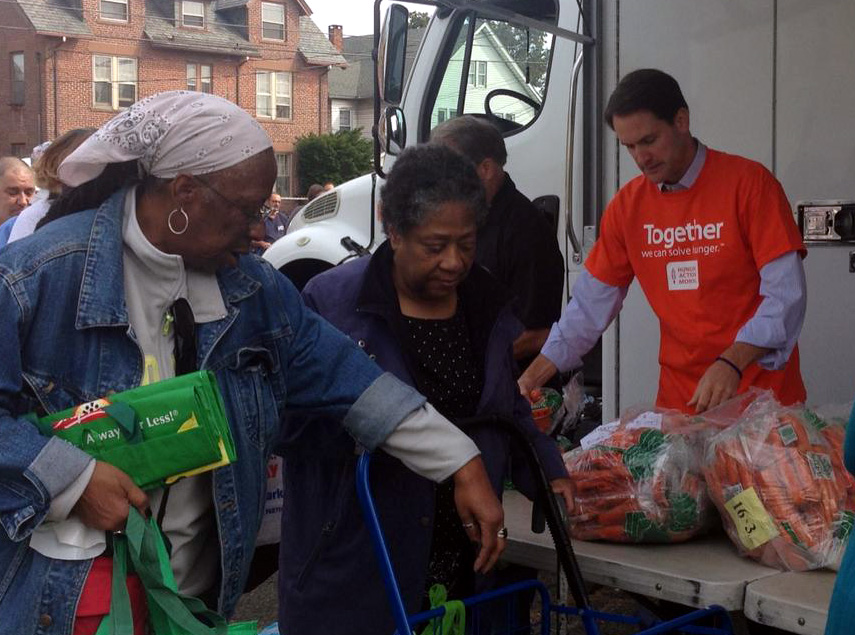 Himes was born in Lima, Peru, to American parents and spent the early years of his childhood in Peru and Colombia while his father worked for the Ford Foundation and UNICEF. His parents divorced when he was 10,  and he and his sister moved to the United States with his mother.

Himes worked on Wall Street, but quit to work in the New York City branch of Enterprise Community Partners, a nonprofit that aims to fight urban poverty through affordable housing. He also speaks flawless Spanish.

“Himes, unlike Esty, has been able to create a good coalition of minorities to back him,” said Rose of Sacred Heart University.

Himes is a regular on Spanish-language radio. He said he tries to attend services in Latino churches and has held roundtables on immigration. “Most of the Latino community has been galvanized around immigration,” he said.

At the State of the Union speech in January, Himes’ guest was a student from the University of Connecticut who lobbies for the DREAM Act. “The Hispanic vote is important in the district,” Himes said.

Those conditions include the sale of a UTC facility in Danbury.