Foley campaign at impasse with NBC over upcoming debate 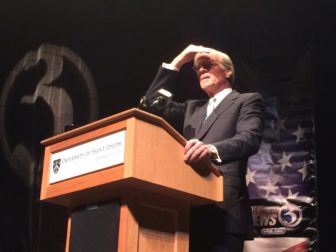 Tom Foley looks into the lights during the sound check at a debate Tuesday.

Republican Tom Foley is unlikely to participate in the three-way debate scheduled for Oct. 23 at the West Hartford studios of NBC Connecticut, a campaign spokesman said Wednesday.

Mark McNulty, a campaign spokesman, said negotiations over what is now scheduled as the sixth of seven debates are at an impasse, though he declined to discuss the points of contention.

The debate is one of two where it appeared that Joe Visconti, a conservative petitioning candidate who is running to the right of Foley on the issue of gun control, would share the stage with Foley and Democratic Gov. Dannel P. Malloy.

Matt Piacente, the station’s vice president of news, declined to comment other than reiterating in an email that “we’ve announced our debate for Oct. 23rd at 7 p.m. and have invited the candidates to attend.”

Visconti was not invited to the first three debates. The sponsor of the first, The Bulletin of Norwich, arranged its forum before Visconti qualified for the ballot and declined to add him to the program.

WFSB, which held a debate Tuesday night, and the sponsors of the next debate, The Hartford Courant and FoxCT, set a polling threshold of 10 percent for inclusion. Visconti was at seven percent in the most recent Quinnipiac University poll.

The Day of New London and CPTV, the sponsors of an Oct. 16 debate in New London, invited him on the condition he reached five percent in polling or had 2,000 donors, Visconti said. He met with representatives of Foley, Malloy and the New London debate sponsors Wednesday.

“They didn’t seem to have a problem with me there,” Visconti said. “I would be very surprised that I would be the reason Tom wouldn’t be in the [NBC30] debate.”

The Malloy campaign jumped on the news.

“Tom Foley must have had a bad day after a bad night last night. He is pulling out of debates left and right because he knows the more Connecticut finds out about Tom Foley and his agenda to hurt middle class families, the less they like him,” said Mark Bergman, a spokesman. “Now he’s pulling out of a debate because of Joe Visconti. Tom Foley can run but he can’t hide from the people of Connecticut.”

McNulty said the impasse was reached prior to the WFSB debate.

Malloy, 59, the first-term Democratic governor, has said he would accept as many debate invitations as possible. Foley initially said his position was the same, but he has declined several invitations, including one from The Mirror, AARP and the Connecticut Conference of Municipalities.

McNulty said even with only four remaining debates, Malloy and Foley will meet more times than candidates in most other gubernatorial races.

The Remaining Debates: Four or Five?
Joe Visconti has a firm invitation to only one debate with Dannel P. Malloy and Tom Foley, a forum in New London on Oct. 16.