As its first building opens, Jackson Lab has an eye on expansion 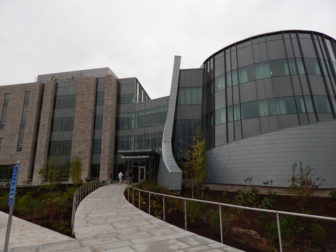 Workers are still putting the finishing touches on The Jackson Laboratory’s new building on the UConn Health campus in Farmington, but some officials at the genomics lab are already thinking about their next facility.

There’s already a master plan to build a 150,000-square-foot building adjacent to Jackson’s new research center, said John Fitzpatrick, senior director of facilities for Jackson, which is based in Bar Harbor, Maine, and has another campus in Sacramento. The existing building is designed for 300 employees, but certain areas, including the auditorium and data center, were built to accommodate more, with expansion in mind.

And when would that happen?

When Jackson outgrows the current building, “and when we find the money,” said Yu-Hui Rogers, site director for The Jackson Laboratory for Genomic Medicine, the lab’s Connecticut institute. She said that’s probably five to 10 years away.

For now, Jackson still has to fill its new building. The Connecticut institute currently has 158 employees working in five locations, and plans to bring them to the new facility over the next six weeks. Officials hope to have 300 employees in three years.

Jackson came to Connecticut with a big financial incentive from the state: $192 million to build the research center and $99 million to subsidize operations over a decade.

The deal requires Jackson to create 300 direct jobs by the 10th year. It’s expected to create more than 660 positions within 20 years.

Critics of the arrangement have said the cost to the state was too steep. Supporters, including Gov. Dannel P. Malloy, described it as a key step in the state’s effort to become a hub for bioscience research.

The Jackson Laboratory has long been known for its work in mouse genetics and for breeding mice used in research around the world. But its work has increasingly branched into human genomics and clinical applications, aided by rapid technological advances that have made it dramatically faster and cheaper to sequence a person’s genome. That’s helped to spur a field known as personalized medicine, which is aimed at tailoring treatments to a person’s particular condition and characteristics. 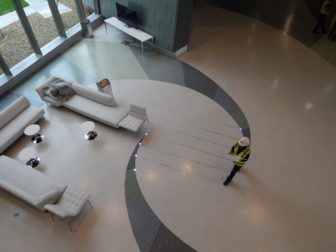 The lobby of The Jackson Laboratory’s new building has an image of a DNA double helix on the floor.

One example is Jackson’s cancer avatar project, in which tumors from human patients are extracted so the tumor’s DNA can be analyzed. Part of the tumor is implanted into a mouse — a specially engineered variety with suppressed immune systems — so researchers can try to determine what types of treatments would be effective. Hartford Hospital and Connecticut Children’s Medical Center signed on to participate in the trial last year.

Rogers said DNA sequencing could also help to identify a genetic mutation in a patient who isn’t responding to treatment.

State, UConn and Jackson officials will hold a ceremony next Tuesday to mark the building’s opening, and some are hoping there will be more to celebrate: Charles Lee, who directs Jackson’s Connecticut institute, recently landed on a list of influential scientists deemed likely to win the Nobel Prize. The prizes are expected to be announced next week.