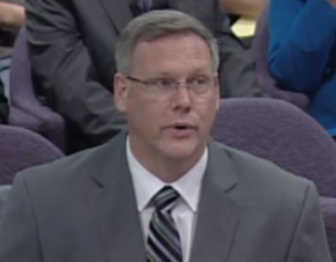 Kenneth Ireland at a hearing last summer on his request for damages.

A man who spent two decades in prison for a crime he did not commit is among Gov. Dannel P. Malloy’s choices for the Board of Pardons and Paroles, one of four judicial and five board nominations announced Wednesday.

Kenneth Ireland of New Britain, who was exonerated in 2009 in the rape and murder of Barbara Pelkey, was named to a full-time post on the Board of Pardons and Paroles, a panel composed of full- and part-time members. After DNA evidence cleared Ireland, another man was arrested and convicted of the crime.

“Ken Ireland is a man of extraordinary character, who endured the unimaginable pain of nearly twenty years of wrongful incarceration and yet is not only without bitterness, but is incredibly thoughtful, insightful, and committed to public safety and public service,” Malloy said. “By long experience, Ken Ireland is intimately familiar with the criminal justice system and knows better than most that there are individuals who deserve to be in prison, and there are individuals whom society should give another chance, and I believe that he will take very, very seriously the responsibility of making those judgments.”

With the legislature out of session, the nominees to the Superior Court and Board of Pardons and Paroles will take office on an interim basis, pending confirmation by the General Assembly next year.

Three of the four judicial nominees are Latino, part of a continuing effort by the administration to make the judiciary better reflect the state population. But the timing so close to the election prompted Republican Tom Foley to say that Malloy was playing politics, trying to appeal to an element of the Democratic base.

“Why is he getting around to these now?” Foley asked.

Andrew Doba, a spokesman for the governor’s office, said the the nominees are needed. In the case of the judicial nominees, they are filling four of 13 vacancies on the Superior Court, where more openings are expected from retirements.

“We had a number of vacancies open up, and we believe these individuals are all proven selections for these positions,” Doba said.

The judicial nominees are:

Kevin Doyle, 46, of North Haven is a senior assistant state’s attorney for in New Haven, responsible for serious felony cases. He received a B.A. from Providence College and a J.D. from American University’s Washington College of Law.

Alex V. Hernandez, 53, of Bridgeport is a lawyer at Pullman & Comley, where he leads its white-collar criminal defense and corporation investigations section. He is a former supervisory prosecutor in the U.S. attorney’s office. He received an A.B. from Harvard University and a J.D. from Stanford Law School.

In addition to Ireland, Malloy also made these appointment the Board of Pardons and Parole: Joy Chance of Bloomfield, Rufaro Berry of Hamden, Patricia Thomas Camp of Bloomfield, and Terry M. Borjeson of Newington.