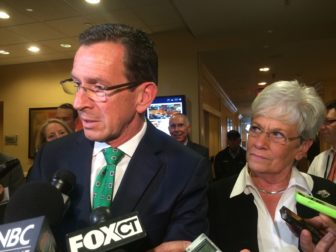 Malloy and Lt. Gov. Nancy Wyman after a recent debate.

In unusually blunt language, the State Elections Enforcement Commission is asking the Federal Election Commission to prevent the state Democratic Party from using funds from a federal campaign finance account to pay for a mailing supporting the re-election of Gov. Dannel P. Malloy.

“The state party’s efforts to circumvent strong state laws are at odds with both the public good and the clear intent of the citizens of Connecticut. They are justified by neither the letter nor the spirit of the federal law. The SEEC is disappointed to see a state party committee utilizing such a tactic and respectfully requests that this Commission reject the effort in its entirety,” the commission said in a letter to the FEC.

The letter was signed by all five of the SEEC’s Democratic and Republican commissioners and its top professional staff:  Michael J. Brandi, the executive director and general counsel; and Shannon Clark Kief, the legal program director.

The commission was responding to a request by the Connecticut Democratic Party for an advisory opinion on the propriety of using the federal account for a mailing promoting Malloy and congressional candidates.

“This is fundamentally a challenge of conflicting guidance — federal law says one thing, state law says another. That’s why we’re seeking clarification. The FEC requires — requires — dollars for these mailers to be used out of our federal account, while SEEC has stated a contrary position,” said Devon Puglia, a spokesman for the Democratic Party. “We follow all rules, laws, and regulations, so any suggestion or insinuation to the contrary is entirely without merit.”

Federal campaign finance law requires that many expenses that assist state and federal candidate be paid through the federal account, leading both parties to use their federal accounts as their major fundraising tool. Democrats, for example, have raised $4.5 million in their federal account over the two-year election cycle. They raised $538,000 in the state account in the first six months of this year.

In many states, the mingling of state and federal campaign dollars is not an issue, but Connecticut has more restrictive rules on state campaigns, primarily a ban on state contractors contributing to campaigns supporting state candidates. Under the state’s voluntary public financing system, candidates are limited to maximum contributions of $100.

State parties can accept maximum contributions of $10,000 to both their state and federal accounts, and state contractors can and do give to the federal account.

Republican legislators complained recently that the Democrats are asking the FEC for permission to widen an existing loophole that already permits contractors to support state campaigns by writing checks to the federal account, which  indirectly supports Malloy and other state candidates by covering the party’s overhead and get-out-the-vote efforts.

In its letter, the SEEC agreed and made the argument that Connecticut’s recent history of corruption is the justification for the restrictions on contractor funds.

It cited the convictions of several politicians, including  Gov. John G. Rowland and Bridgeport Mayor Joseph Ganim, on charges relating to accepting favors from public contractors.

“These scandals received widespread press coverage, leading the media to dub the state ‘Corrupticut.’ The public had lost confidence in their state officials. A 2004 poll revealed that 78% of likely Connecticut voters agreed that the way political campaigns were financed in Connecticut encouraged candidates to grant special favors and preferential treatment to their contributors,” the letter said.

The Democratic Party downplays the conflict, saying it simply is seeking to resolve conflicting state and federal rules.

“This is fundamentally a challenge of conflicting guidance — federal law says one thing, state law says another. That’s why we’re seeking clarification. The FEC requires — requires — dollars for these mailers to be used out of our federal account, while SEEC has stated a contrary position,” said Devon Puglia, a spokesman for the Democratic Party. “We follow all rules, laws, and regulations, so any suggestion or insinuation to the contrary is entirely without merit.”

The commission said the proposed Malloy mailer, which was submitted to the FEC for review by the Democrats, was hardly a broad get-out-the-vote effort on behalf of state and congressional candidates.

“The proposed ad itself is unremarkable for an ad supporting a single candidate running for a state office. It is double-sided with approximately 285 square inches of surface area, featuring nine photographs, all of Governor Malloy. There are 203 words and numbers. Included is the information in one corner of one side, taking up one square inch, with the poll hours and saying that a ride to the polls can be had by calling a provided number,” the SEEC said.

The conclusion was that 99.6 percent of the ad promotes Malloy and the remaining 0.4 percent instructs people how to vote.

A dozen groups and individuals, including the House and Senate Republican caucuses and ConnPIRG, have filed public comments with the FEC opposing the Democrats’ request.

Those comments can be viewed on line.