After months of sparring over when, how often and if they would debate, the major party candidates for state treasurer have agreed to participate in a forum to be televised two days before Election Day.

The campaigns for four-term Treasurer Denise L. Nappier and for Trumbull First Selectman Tim Herbst both confirmed Friday they will debate on Oct. 29 at the studios of WVIT TV-30 in West Hartford. That forum will air on Sunday, Nov. 2.

Herbst, the Republican nominee, had challenged Nappier to five debates, and has frequently criticized her for not participating in any.

A Hartford Democrat, Nappier had agreed to an Oct. 7 forum with Herbst at the Hartford Public Library, but backed out that day, citing a family illness.

“I want to thank NBC for hosting this debate,” Nappier wrote in a statement. “I look forward to a spirited discussion about substantive issues and the opportunity to highlight the fiscally responsible and solid results of my administration.”

Herbst has been attacking Nappier’s 20-year track record in the treasurer’s office, arguing chiefly that it has left state finances, including its pension systems, “in a shambles.”

A new Herbst TV ad this week says Nappier “mismanaged our money, exploded our debt and lost our trust.”

For example, Herbst objects to a 2007 plan by Nappier and then-House Speaker James Amann, D-Milford, to bond $2.28 billion to shore up the pension fund for Connecticut teachers.

That controversial plan hinged on the assumption that Connecticut could earn a greater return investing those funds over the 25-year bonding period than the state would pay in annual interest of more than 5 percent. The plan was approved by the 2007 legislature and by Gov. M. Jodi Rell. 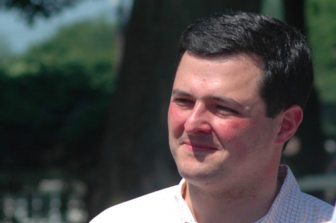 But other claims by Herbst are more tied to governors’ and legislatures’ decisions than to Nappier’s.

The GOP nominee has noted repeatedly that pension funds both for teachers and for state employees have huge, unfunded liabilities. But those problems stem chiefly from decades’ worth of failures by governors and legislatures to adequately save for those obligations.

But Herbst said Friday that Nappier should have used her office’s bully pulpit to speak out against these practices, yet failed to do so — particularly when it would have involved criticizing the legislature’s Democratic majority.

“That’s called leadership,” he said. “Sometimes you have to put your own party on the spot.”

“Although the treasurer does not determine the state contribution to the pension plans, Denise Nappier believes the state should be paying its actuarial required contribution,” campaign spokesman Rose Ryan. “She testified in front of the legislature when she first became treasurer on the need to lower the unfunded liability. She has continued to testify to the legislature, has written op-eds, and publicly call for solvency ever since.”