Washington – Reps. Elizabeth Esty, D-5th District, and Jim Himes, D-4th District, have made the care of veterans a focus of their reelection campaigns, following a national trend that puts the nation’s veterans near the top of the list of political issues this year.

Esty, who has been challenged by Republican businessman Mark Greenberg of Litchfield, appears with veterans in two of her television ads. One features an Iraq War vet who lauds Esty’s constituent services to veterans and the other is a Vietnam War vet who says Esty’s help in restarting his Social Security benefits helped him save his home.

The Himes campaign’s only television ad features a Vietnam War vet who suffered a stroke and asked for the congressman’s help.

Himes, who is challenged by Republican Dan Debicella, also appeared last week at a press conference at Norwalk’s Veterans Park, where he accepted the endorsement of a local veterans group

Republican congressional candidates also say the nation’s veterans deserve more help and respect, but haven’t focused on them with the intensity of Democrats, a leading ad-tracker said.

With just weeks before the Nov. 4 elections, no Connecticut Republican congressional candidate has yet to run a television ad featuring veteran issues – although Greenberg has had his father, a World War II veteran, appear in an ad defending the candidate’s stance on Social Security.

Elizabeth Wilner of Kantar Media, a company that tracks political ads in the nation’s major television markets, said the issue of veterans care is the only new issue in this campaign cycle, which has otherwise focused on jobs, government spending, Social Security and Medicare, the Affordable Care Act and “other old saws.”

“While—or indeed, because—the Veterans Affairs scandal blew up on their president’s watch, Democrats have embraced the cause as much or even more than Republicans,” Wilner said.

The former head of the VA was forced to resign on the heels of charges that several VA hospitals had falsified wait times at their facilities. The scandal prompted Congress to approve a VA reform bill that, among other things, will provide greater oversight of the agency.

Of those 42,267 spots, 69 percent were sponsored by Democrats and 31 percent by Republicans, Wilner said.

Other Connecticut lawmakers have spent congressional recesses at a number of veteran-related events and on efforts on behalf of local veterans.

Rep. Rosa DeLauro, D-3rd District, said she successfully lobbied Veterans Affairs Secretary Robert A. McDonald to extend benefits for 10 Connecticut veterans so they could stay at Seacrest Retirement Home in West Haven and HighVue Manor in Hamden for an additional year. 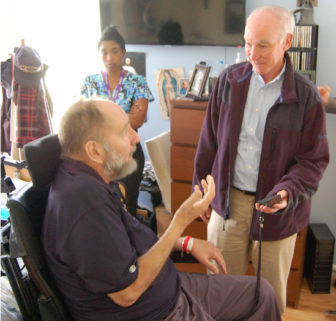 Courtney recently presented a posthumous medal to the family of a World War II veteran. He also stepped in to solve a problem with phone systems at the New London VA clinic and his campaign is hand -delivering flyers touting Courtney’s record on veteran issues. He also emailed his constituents a report on his effort to help U.S. Navy veteran who needed money to improve the accessibility of his bathroom.

But Esty and Himes, who are in the most competitive congressional races in the state, have pressed veteran issues the hardest.

“They are breaking into Republican territory,” Rose said.

Both Esty and Himes represent districts that were once represented by Republicans.

Rose said the ads, which feature older white males, appeal to older, white voters “who we know are prone to vote for Republicans, especially in the midterms “

Rose also said the ads are likely to appeal to unaffiliated and independent voters, whose numbers are growing in the 4th and 5th Districts.

He also said the veteran-themed ads are aimed at countering an “image problem” Democrats have on the issue of national security.

“They have been viewed as week on ISIS (a group of Islamic militants) and in general weak on military issues,” he said.

But Rose also said Democrats have to be careful their use of veterans in campaign ads “is not perceived as being exploitative.”