Connecticut’s gubernatorial contenders battled Tuesday for the support of local mayors and first selectmen, pledging to preserve municipal aid and to ease pressure on property taxpayers.

But both Gov. Dannel P. Malloy and Tom Foley were light on details when it came to their future plans for tax reform, special education, unfunded mandates and transportation. 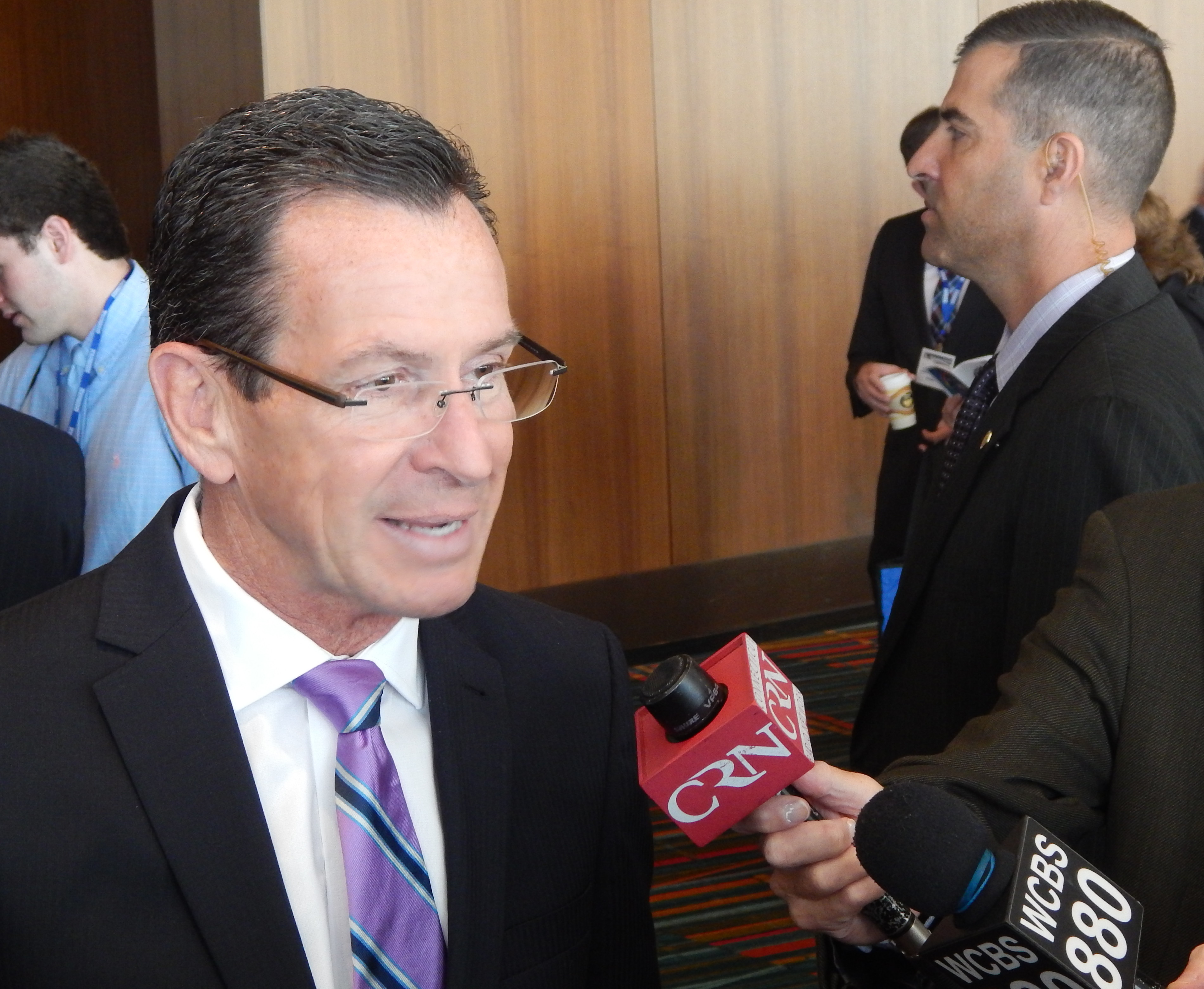 The Democratic governor and his GOP challenger also sparred after Tuesday’s annual convention of the Connecticut Conference of Municipalities. In separate interviews, Malloy repeated his call for Foley to fully disclose his tax records while the Republican nominee accused the governor of running from his record on the state’s economy.

“There is a resounding sense that Connecticut has lost something,” Foley told more than 400 first selectmen, mayors, and other municipal leaders gathered at the Connecticut Convention Center.

Trying to take the steam out of Monday’s report from the state Labor Department that showed Connecticut gained 11,500 jobs in September, Foley said the Nutmeg State’s recovery from the last recession still lags both the nation and the region.

“No matter what you say about jobs added,” he said, “people’s incomes are declining.”

Though Foley has offered few details about how he would close the 7 percent projected shortfall in the next state budget – a $1.4 billion hole – he again insisted he would freeze local property taxes on motor vehicles at 30 mills and reimburse cities and towns for the estimated $30 million in lost tax receipts.

Noting that the property tax rate in Hartford is 74 mills, or $74 for every $1,000 of assessed property value, Foley said “it is punitive to own a car here.”

The Greenwich businessman garnered a round of applause after pledging he also would not cut municipal aid next year to help balance the books – something Malloy has insisted repeatedly that Foley would do.

“We need long-term tax reform,” to revitalize Connecticut, and particularly its cities, after Malloy and the legislature raised taxes $1.8 billion in 2011 to help close a major deficit.

But while Foley has said he intends to shave one-half of 1 percentage point off of the 6.35 percent sales tax rate, he didn’t offer any specifics on how he would compensate for about $330 million in lost revenue.

Similarly, when challenged by Bristol Mayor Ken Cockayne to name any costly state mandates on communities that should be repealed, Foley agreed there was a problem – but didn’t name any.

When asked again by reporters afterward, Foley said, “I would look to get in (office) and then see which (mandates) are supported by good public policy.” Those that are not, he added, would be repealed. 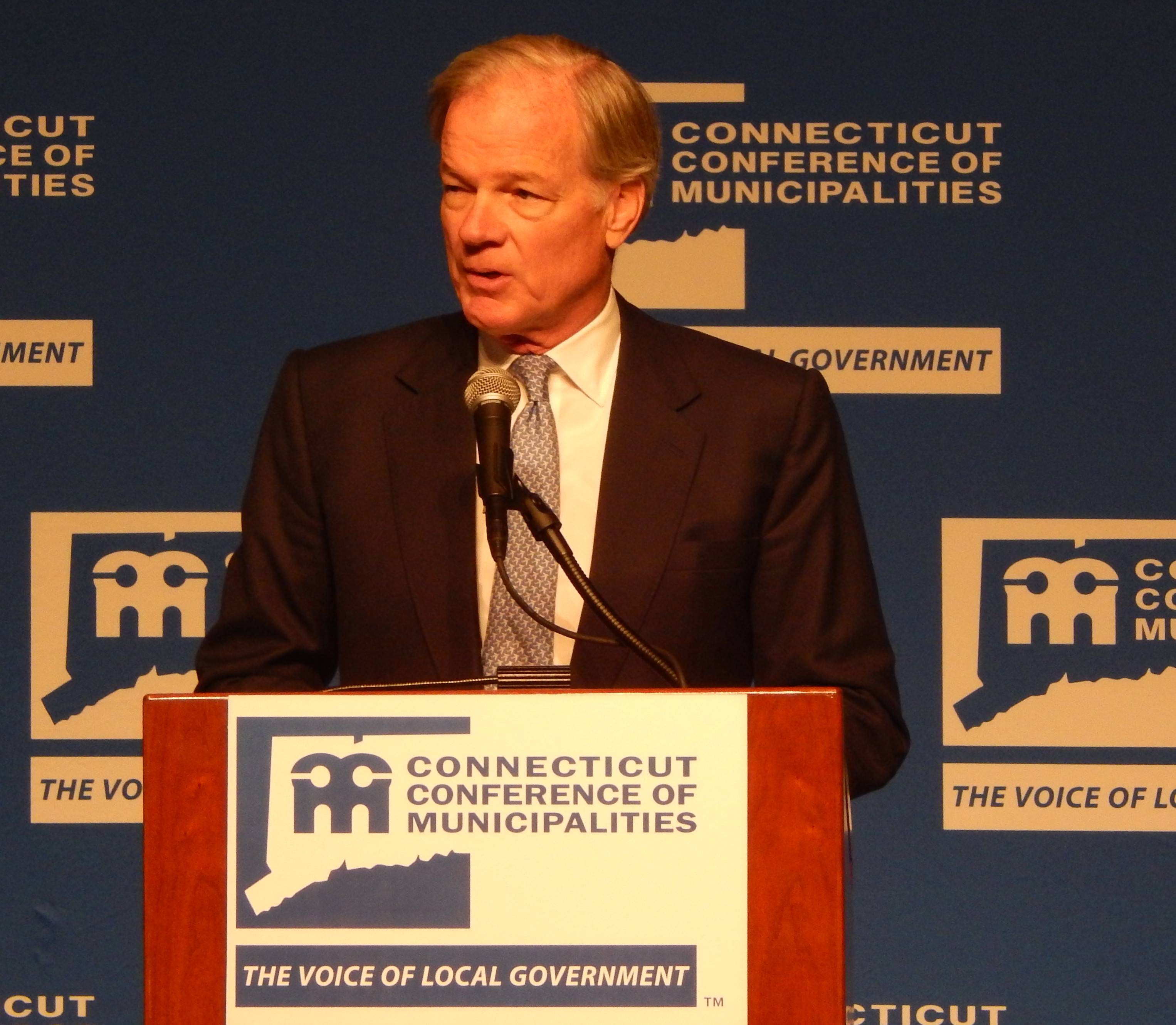 Malloy, who addressed the convention after Foley, harkened back frequently to a key decision he made after taking office in September 2011.

Malloy not only spared municipal aid from cuts when he and legislators closed a $3.7 billion budget deficit in 2011, but he replaced those expiring federal dollars with state funds.

Local schools dodged a $1 billion-plus revenue loss throughout the four years of his administration. The alternative, Malloy added, would have been “an absolute nightmare” complete with tens of thousands of lost school district jobs.

“If I lose this election,” Malloy said, “it’s because I kept my fidelity to you.”

The governor also said the new Small Business Express program he and legislators launched in late 2011 has invested in more than 1,200 small firms, touching virtually every city and town. “What it was,” he added, “was a lifeline to those small businesses in your communities.”

But while Malloy often pointed to his track record over the past four years, he also was lacking in details when it came to the future.

When asked how the state could reform a special education system that increasingly leaves local towns picking up more of the cost, Malloy was sympathetic yet noncommittal.

Could the governor deal with the deficit and also oversee “comprehensive reform” of a system that overburdens municipal property taxpayers? asked Ridgefield First Selectman Rudy Marconi.

“I don’t have an exacting answer,” Malloy said. “But it is firmly on my mind.”

When asked what could be done to expand state investment in transportation in the future, Malloy insisted that his administration already has outspent those of its predecessors, and that at least 80 new projects would begin next spring.

Foley said Tuesday that he does have earnings from out-of-state businesses, but that the bulk of his state income tax was paid to Connecticut.

“Why is the governor talking about people’s tax returns?” Foley said, noting the governor declined to release details about rental income he received in 2011.

“Why doesn’t he want to talk about why he’s raised taxes so much and slowed down the economy?” Foley added.

“He could end this whole thing,” Malloy said afterward, “by releasing his tax returns.”