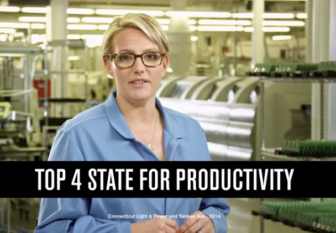 A scene from the state’s TV campaign.

The administration of Gov. Dannel P. Malloy is spending $403,963 to air television ads in October promoting Connecticut as a place to do business, putting a positive view of the state on regional TV at the height of the governor’s re-election campaign.

The ads began running on broadcast and cable television in New York and Connecticut on Sept. 29 and will continue through Oct. 26, according to the state Department of Economic and Community Development.

First broadcast in the spring at a cost of $569,637, the ads promote the state’s economic development programs and general business environment and do not show or mention the governor.

Malloy, a first-term Democrat engaged in a competitive race with Republican Tom Foley, said the campaign was resumed to promote the state’s programs, not him.

“Listen, we’re competing for every job, and New York is advertising on TV stations in Connecticut right now talking about the programs they have. We have better programs than they have, and we should be getting that message out,” Malloy said. “As opposed to my two predecessors, I don’t appear in any ads.”

Jim Watson, a spokesman for the DECD, said the same ads that aired in the spring campaign are airing now.

One of the commercials features Edison Liu, the chief executive of the Jackson Laboratory, the company Malloy coaxed to Connecticut to open a genetic research institute in Farmington with a $291 million aid package. Malloy recently celebrated the institute’s opening.

Most of the spending is going to stations and cable systems in New York, though stations in New York City also have significant viewership in lower Fairfield County. The state is paying $355,640 to air ads in New York and $48,323 in Connecticut.

“The intent of the ads is to create a perception that everything is fine in Connecticut, when it isn’t,” Foley said. “He’s trying to be clever, and it’s really amateurish.”

The same ads prompted criticism in the spring from Danbury Mayor Mark Boughton, then one of five Republicans running for governor.

“I think the governor knows his Achilles’ heel is the economy of this state. He knows he has to address that,” Boughton said then.

Boughton said any ad promoting the state’s economy to a domestic audience, especially ones featuring some of the companies Malloy helped bring to Connecticut, was a boost to the first-term Democratic governor. The campaign is called, “Meet the job creators.”