Foley struggles on a deep dive into housing policy 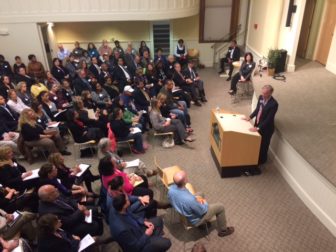 Republican Tom Foley underwhelmed an audience of housing advocates Wednesday, admitting unfamiliarity with a broad range of housing policies, programs and terms with less than two weeks left in his second run for governor.

Foley was unaware that public housing is largely a state responsibility in Connecticut. Or that state law sets a goal of ensuring that 10 percent of every municipality’s housing is affordable. He did not recognize the term “supportive housing,” a public-policy trend since the 1990s to help persons with disabilities live independently.

“My overall impression is that he really hasn’t thought about housing at all, other than as sort of an offshoot of economic development,” said Betsy Crum, executive director of the Connecticut Housing Coalition. “I heard nothing for a policy agenda.”

Several advocates credited Foley for accepting their invitation to have an in-depth public discussion about housing policy, knowing he was unlikely to draw votes away from Gov. Dannel P. Malloy, who has invested deeply in housing, despite a fiscal crisis.

Malloy had an easier time at the forum sponsored by the Partnership for Strong Communities. As mayor of Stamford for 14 years before his election as governor, Malloy arrived in Hartford well-versed on public housing and the role of state government in leveraging private dollars for affordable housing.

He has committed $300 million to rehabilitating public housing units that have stood vacant for years and $500 million for broader housing initiatives.

“To put it in perspective, with respect to state dollars we have appropriated more money in 3½ years than had been appropriated in the prior 24 years,” Malloy said to applause. “I’m proud of that record, and I’m proud of a lot of other things.

Malloy told the audience he didn’t know what supportive housing was when he was elected mayor in 1995, a year before Stamford broke ground on its first supportive housing complex. He told reporters he was surprised that Foley was unaware of the term nearly two decades later.

“You’d really have to work at that, to not know anything about it,” Malloy said. “If you want to run the most urban state in the nation or one of the three most urban states in the nation, maybe you should understand housing policy just a little bit, so that you at least recognize the terms.”

Foley said he came to learn and to convey his interest in working with the advocates.

But Foley repeatedly begged off answering specific questions about his views towards major programs now underway to combat homelessness and provide more affordable housing in a state where 30 percent of renters spend half their income on housing.

Hance asked him if he would continue the 10-year, $300 million program begun by Malloy to rehabilitate hundreds of uninhabitable apartments in state-financed public housing. The program is in its third year.

“Is it working?” Foley asked.

“Oh, it sure is,” Hance replied. “We have a lot more housing units being repaired.” 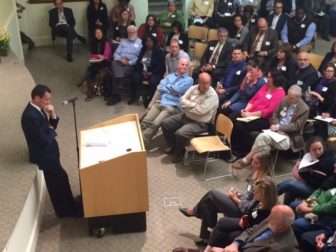 Asked about how he would stem foreclosures, Foley returned to an answer he offered several times, whether the question was homelessness or increasing affordable housing.

“Yeah, well, again this all comes back to jobs and the economy,” Foley said, criticizing Malloy for the state’s slow rate of economic growth. “If we get the economy going, a lot of these problems go away.”

Sister Pat McKeon, who works at Mercy Housing and Shelter in Hartford, told him that a lot of them don’t.

Foley was unaware of a state law allowing developers in communities that fall short of a 10-percent affordable housing standard to bypass some local zoning rules if they provide affordable units. Only 31 communities in the state now meet that standard.

“I don’t know if the 10-percent mandate on every town is a good idea. I don’t know that it’s not a good idea,” Foley told one questioner, a woman who described herself as previously homeless. “You’re asking me if I would support it. I wouldn’t support it without knowing more about it.”

Carol Sistrunk, the executive director of the Danbury Housing Authority, told him it was currently state policy.

“If you were elected governor, would you rescind it?” she asked.

Susan Kelley, a member of the Keep the Promise Coalition, which advocates a comprehensive mental health system, asked Foley if he would have the state invest in supportive housing, where residents with mental-health challenges can get services and live independently

“Now, when you say supportive housing for people for mental illness, I’m not exactly sure what you mean,” Foley said.

Kelly told him the concept was providing on-site services at buildings where the tenants otherwise live independently.

“All right. Well, I certainly support more community-based care for people with mental health issues,” Foley said. “I think the answer is yes.”

An educator asked if Foley thought housing patterns contributed to the achievement gap among students in the state’s poorer and wealthier communities.

“Good question. I’ve been involved in education reform for over 15 years. It rips at me that Connecticut has the worst achievement gap in the country,” Foley said.

But he never said if he thought affordable housing was part of the problem.

Foley had no answer for a woman who asked how his administration would stimulate the private sector to develop affordable housing in the suburbs as a means to integration.

“You’re asking me something that’s really beyond my area of expertise. I don’t really know,” Foley said. He added, “ I certainly support the effort to further integrate our society.”

“You’re asking me how we can get communities to do this? How we can make it more affordable, so more of it happens?” Foley asked. “I don’t know the answer, but I would like to help you and others solve the problem.”