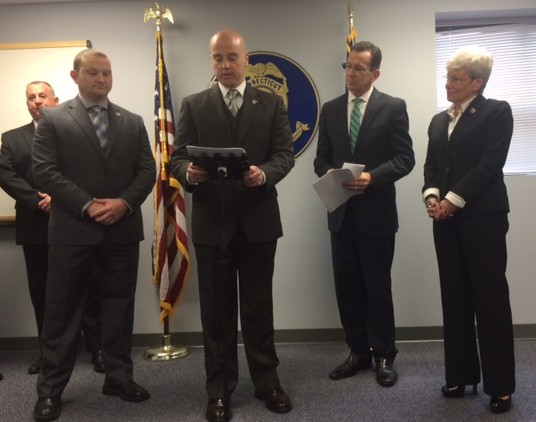 The endorsement Thursday of Gov. Dannel P. Malloy by the Connecticut State Police Union reflects its leadership’s misgivings about Republican Tom Foley as much as it does support for a governor with whom it battled over concessions.

Foley, a Greenwich businessman opposing Malloy for the second time in four years, has worked without success to live down an antipathy to collective bargaining and binding arbitration laws that union leaders say they detected in 2010.

Over the summer and into the fall, a procession of unions has endorsed the first-term Democratic governor, looking past conflicts with Malloy that gave Republicans hope that elements of organized labor might sit out the Malloy-Foley rematch.

“There’s an awful lot of pressure nationally on the unions to endorse Gov. Malloy,” Foley said before the state police union endorsement was announced. “They’re trying to hold the line here, and they’re trying to make Connecticut a battleground state on union issues.”

With the race too close to call, two of the unions whose members have publicly clashed with Malloy, the Connecticut Education Association and Connecticut State Police Union, have resisted entreaties to stay neutral.

“We felt compelled to speak out,” said Andrew Matthews, president of police union, which represents 1,099 state police officers from the rank of trooper through master sergeant.

Few would have predicted the endorsement in 2011, when the union voted to reject a pay freeze sought by Malloy as part of a concession package to reduce a $3.6 billion deficit.

“One thing that’s missed is most people don’t know what would have happened if Tom Foley was governor. It’s easy for people to criticize the governor,” Matthews said.

The endorsement was helped by the union’s vastly improved relationship with the Malloy administration since the retirements of Commissioner Reuben Bradford and Col. Danny Stebbins, the governor’s original leadership team at the Department of Emergency Services and Public Protection, he said.

“There was no communication. In 3½ years, we probably had a total of three meetings with Commissioner Bradford and Col. Stebbins, and they were there to dictate to us. They never involved us in things the contact required them to,” he said.

“I’m very happy with the leadership of the department,” Malloy said, accepting the endorsement. “This is a good day. We’re pulling in the same direction.”

But aside from gratitude at Malloy’s willingness to listen to the union’s concerns, Foley also helped deliver the endorsement.

Going back to 2010, Matthews said, Foley did not seem to understand labor laws under which public-sector employees live, including the use of binding arbitration to break deadlocked negotiations in lieu of the right to strike.

He described a conversation Foley had four years ago at the Connecticut Convention Center with him and three other leaders of unions representing police and firefighters. They asked him if binding arbitration was repealed, how would labor-management deadlocks be settled.

“I swear, his quote: ‘If you don’t like it, you can strike.’ Which tells me something else, too. Mr. Foley doesn’t understand what the law says. The law prohibits police and fire from striking,” Matthews said.

This year, Matthews said, Foley botched his interview with the union’s senior leaders. He first showed up on the wrong day, then arrived unprepared on the right day.

“These things matter to state troopers. We’re punctual. We’re prepared,” Matthews said. “He showed up. He doesn’t have the questionnaire done. His responses were not prepared. He has a lack of knowledge of state law.”

In June, Foley addressed the AFL-CIO and promised not to follow the example of Wisconsin Gov. Scott Walker, a Republican who successfully stripped public-employee unions of some collective bargaining rights, leading to a near-tripling of contributions for health coverage.

Foley said his call for a “Wisconsin moment,” a shift from Democratic to Republican control of state government was misunderstood as an endorsement of Walker’s hard-line stand with public employees.

Matthews said union leaders are skeptical. Highway patrol officers went five years without a raise in Wisconsin and their biweekly contributions for health care jumped from $78 to $220, he said.

In New Jersey, Gov. Chris Christie, who has campaigned with Foley as the chairman of the Republican Governors Association, also has taken benefits from troopers, who now contribute $612 a month for insurance and pensions, he said.

“This is a national trend,” Matthews said. “Look around.”

Over the campaign’s final 10 days, that message will be reinforced, beginning this weekend by Randi Weingarten, the president of AFT, a national union of teachers and other public-sector workers.

Foley, who won an informal expression of support from a CEA affiliate in Waterbury, said he still believes his outreach to labor will be rewarded.

“I’m very confident that many teachers, many state workers, many police and firefighers, including the state police, are going to be supporting me,” he said this week after addressing an association of retired teachers. “Not just one or two, but large numbers.”