But while incumbent Kevin Lembo says the state has made considerable progress on both fronts over the past four years, his Republican challenger, Sharon McLaughlin, insists too much work remains to be done to feel good about the status quo.

Lembo, who is seeking a second term in the comptroller’s office, unveiled plans this week to reform how Connecticut saves for fiscal emergencies.

The Guilford Democrat also said he hopes to merge a new public online system for tracking state finances with dozens of agency and departmental websites.

For McLaughlin, the key to fiscal reform hinges on state officials’ ending a long-running habit of ignoring millions of dollars in cost-saving ideas offered annually by the bipartisan auditors’ office.

And when it comes to transparency and accountability, the Ellington Republican added, the comptroller should be focused on reversing a dangerous trend of shifting billions of dollars in state spending – either onto Connecticut’s credit card, or off the books entirely.

Besides administering state government’s payroll, and health care and pension benefits, the comptroller also has a host of budgetary tracking and financial reporting requirements.

“That mix of the fiscal guardian – that sort of talking-straight piece – together with (programs) which are critical to the operation of government, make for a very potent mix,” Lembo said. “It makes it really critical that you have the experience, the temperament, and maybe even a little vision for what that office should be doing.”

Lembo said he made strides in enhancing government transparency and accountability in his first term, pointing to “Open Connecticut,” a website begun in 2013 and relaunched last May. It provides visitors with data – updated daily – on state spending and revenues.

The comptroller also faced a more delicate task earlier this year when he convinced Gov. Dannel P. Malloy’s administration to create an online system allowing the public to keep track of government assistance to businesses – an initiative several of the governor’s agency heads had opposed in 2013.

“We’re doing some interesting stuff,” Lembo said. “But that work doesn’t end. We’ve still got more to do.”

The next step, the comptroller said, is to create one online database where all of this budgetary and economic-development data – not to mention all the content of more than 60 agency and departmental websites — “all live in the same environment.”

For example, any member of the public researching mental health treatment, should be able to track spending, reports on program outcomes, and other details, all at once.

Lembo said that while this goal would take considerable time to achieve, it is possible because Gov. Dannel P. Malloy’s administration has made key investments to begin upgrading archaic computer networks in many agencies and departments. 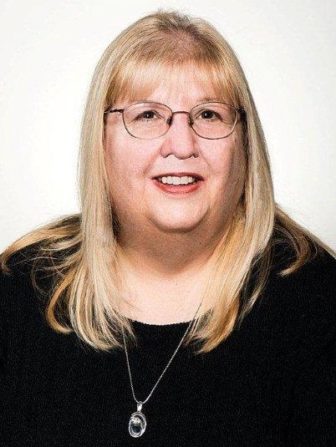 But while McLaughlin praised the “Open Connecticut” site as “a great step in the right direction,” she said the comptroller’s must become a strong voice of opposition to a growing trend of secrecy in state finances.

In 2013, Malloy and his fellow Democrats in the legislature’s majority moved more than $2 billion in Medicaid spending supported with federal funding outside of the state budget – a maneuver blasted by Republicans as a gimmick to circumvent the constitutional spending cap.

Republican legislators also have cried foul over the last two years as Democrats have used borrowing to cover tens of millions of dollars in spending traditionally paid for with cash in the budget, involving town aid, stem cell research and pollution abatement programs.

“It’s the same thing as ‘out of sight, out of mind,’” McLaughlin said, adding that as comptroller she would speak out strongly against these practices. “It’s easy to lose track of where we are when we do things like this.”

Lembo and McLaughlin agreed that Connecticut needs to do a better job of saving to prepare for the next economic downturn.

State government exhausted its fiscal reserve four years ago. Since then it has deposited $519 million into its Rainy Day Fund, which represents 3 percent of annual operating costs.

Connecticut has never held more than 8 percent in its reserve, and current law sets a limit of 10 percent.

Lembo supports raising that cap to 15 percent. Connecticut’s tax revenues are more volatile than those of most other states, due largely to proximity to Wall Street and its heavy reliance on capital gains, dividends and other investment earnings.

Tax receipts tied to this type of income typically fluctuate sharply, and Lembo and others have argued a larger reserve would give Connecticut the funds need to plug deficits, avoid tax hikes and protect vital programs during recessions.

The problem, though, is that legislatures and governors traditionally haven’t saved as much as they could have during good fiscal times.

To help change that, Lembo said Connecticut should consider the revolutionary step of building a Rainy Day Fund deposit into its annual budget. In other words, rather than wait until the fiscal year ends – and seeing if funds are left for the reserve – Connecticut should put money in its savings account right away.

“We tend to wait until the chicken bones are left on the plate and then pick at them,” he said. His proposal, he added, mirrors the good savings habits parents teach their children: “Pay yourself first.”

The comptroller acknowledged this would require officials to break habits built over decades.

“You begin by not cramming this down peoples’ throats,” he added, suggesting that a working group with members of his office and the legislature could get the conversation started. “These are ideas worth considering. Let’s get the interested folks together.”

McLaughlin said budgeting for Rainy Day Fund deposits only should be considered if state taxes are not increasing.

But with nonpartisan analysts projecting a $1.4 billion deficit in the next budget, equal to about 7 percent, tax hikes may be discussed in the next General Assembly session.

These reports typically outline various types of waste – lost property, poor inventories, mismanaged overtime and compensatory time – and other problems that draw little response from the legislature, she said.

“There is an opportunity for us to do a better job with stewardship” of all state agencies, she said. “It’s taxpayer money and we could find a better place to put it.”