It’s not personal, even if Christie does call Malloy a liar 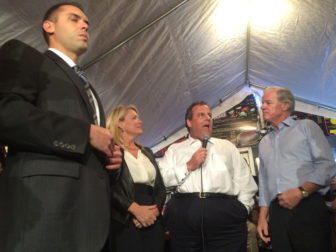 Groton – It was a good story line, but Chris Christie wasn’t having it. On his fourth trip to Connecticut in six weeks, the New Jersey governor insisted he was here to promote a Republican challenger, not tweak a Democratic incumbent who delights in favorably comparing his state’s bond rating to Christie’s.

Christie, the chairman of the Republican Governors Association, said there was nothing personal in his efforts to help Republican Tom Foley unseat Gov. Dannel P. Malloy. He assured reporters he could care less about Malloy, a first-term Democrat struggling for re-election while Christie contemplates a run for president.

Sure, Christie says Malloy is a serial liar, a man who misled voters into thinking he was against a tax increase, then raised taxes. Sure, he doesn’t really think Malloy is gracious, certainly not as gracious as the governor of New Jersey. But do not suggest that it’s personal, not even when he comes back on election eve to hit Malloy again.

“We knew Dan Malloy wouldn’t keep his word. He never has. And he hasn’t. And if he gets another chance, he won’t again. We can’t give him another chance,” Christie said, talking about taxes. “This is a very important race for the RGA. We’re very engaged, very involved. And I look forward to being up here again before election day.”

Christie stood with Foley and his running mate, Heather Bond Somers, in the crowded, overheated dining room of The Spot, a place with Guinness on tap, where Monday is steak night. Christie was in shirt-sleeves, rumpled at the end of a long day spent campaigning for a governor in Florida and a would-be governor in Connecticut.

Foley arrived in jacket and tie, but both disappeared as he took his place beside Christie, first to address supporters in a beer garden, then to take questions inside from reporters.

Christie was a little sharper with the press than on previous visits.

He pushed back at a question about why Foley can’t seem to budge the polling needle, even though Malloy can’t get close to 50 percent on any key measure after nearly four years in office and a majority of Connecticut voters see the state moving in the wrong direction. A CBS-New York Times poll out earlier in the day pegged the race as a 40-40 tie, similar to the previous two Quinnipiac surveys.

“I don’t view it that way. I think the needle is moving here,” Christie said, saying the proof will come on Nov. 4. “So, I disagree with the premise of your question.”

Christie hinted broadly he knew things that CBS, the New York Times, Quinnipiac and his questioner do not.

“I just see different things than you’re seeing right now. And I can’t talk any more about that right now, because I’m not allowed to coordinate with the Foley campaign, and I’d have to make Foley leave the room,” Christie said, grinning. “But all I’m telling you is I see different things. I like what I’m seeing.”

A super PAC allied with the Republican Governors Association has spent $6.7 million trying to defeat Malloy with a barrage of negative television ads, quadruple the RGA’s efforts four years ago when Malloy barely bested Foley for an open seat. The PAC can spend unlimited amounts, so long as it does not coordinate with Foley.

A question about his administration’s decision to confine a nurse returning from Africa to an isolation tent outside a Newark hospital for 24 hours showed that, like the governor of Connecticut, the governor of New Jersey is comfortable lecturing the press.

Christie dismissed any suggestion he faced a political backlash from the nurse, Kaci Hickox, writing a scathing first-person account of her welcome by the state of New Jersey upon her return from Sierra Leone after working with Doctors Without Borders. 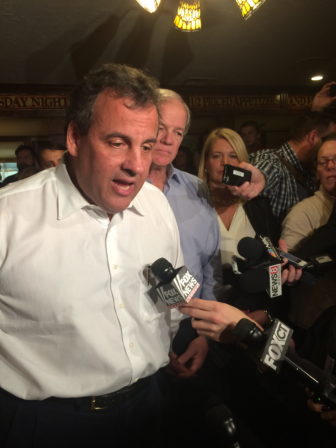 Christie and the press inside The Spot.

New Jersey had to take the lead, since the Centers for Disease Control did not, he said.

The crowd signaled its agreement, applauding.

Christie lightened when a television reporter from France asked in heavily accented English if he was running for president. To no one’s surprise, Christie declined to make news on this question in Groton, Conn., even when asked nicely by a reporter who had come a long, long way.

He said he was too busy to think about it. He is visiting 18 states in the next eight days, campaigning for GOP candidates for governor and not campaigning for president.

“I haven’t been coy about it. I’m obviously thinking about it. But you know I won’t make any decision until next year,” Christie said.

Then he leaned forward, as though he might whisper in the French microphone. He smiled and said, “So, I appreciate you coming all the way over from France. Sorry I can’t give you any news tonight.”

Another question about Ebola spoiled the mood. Christie refused to make eye contact with an out-of-state reporter who stood behind him in the scrum, pressing for details on how his home quarantine order would work.

“You’re in your home,” Christie said. “And you’re quarantined.”

He spoke slowly, as if addressing a child.

The crowd laughed. The reporter did not.

Pointing a microphone at the governor, the reporter pressed on, his question inaudible to much of the room, but audible to Christie.

“I know, I know at times – I heard your question – I know at times that you all would like to make things a heck of lot more complicated than they are,” Christie said. “In-home quarantine means in home and quarantined. If someone is asymptomatic they can be quarantined in their home.”

It was about his relationship with Malloy, whose stump speech these days usually includes a mention of the recent downgrade of New Jersey’s bond rating — the eighth during Christie’s tenure, a record for a Garden State governor.

The poor bond rating — New Jersey’s is lower than every state’s but Illinois’ — is a consequence of his breaking a promise to make $2.5 billion in extra pension payments to attack the state’s unfunded liability.

Christie challenged the premise of the question, a query about his habit of going “back and forth” with the governor of Connecticut.

“Listen, I‘ve not been back and forth with Gov. Malloy,” Christie said. “Gov. Malloy is just an angry guy. I don’t understand, you know, how Gov. Malloy can criticize the people of New Jersey and our response to Super Storm Sandy is beyond me. Especially when, quite frankly, I was extraordinarily complimentary of Gov. Malloy in his response to the shootings in Newtown.”

Christie compared Malloy’s graceless behavior to his own graciousness.

Malloy, with whom Christie does not go back and forth, falls short of that standard, he said.

“What Dan Malloy does is just play partisan, angry politics. Now, if that’s what the people of Connecticut want, then that’s what they’ve gotten for the last four years,” Christie said. “So, I don’t go back and forth with Gov. Malloy.”

And he shared the reason he doesn’t engage in back and forth: It’s what Malloy wants.

“I’ve said this all along. Gov. Malloy, every day, is trying to figure out a way to get his name in the New York Times. And he knows the best way for him to do it is to criticize me,” Christie said. “Fine, I have broad shoulders. I quite frankly don’t care what Dan Malloy thinks about what I did as governor, but I compliment him for the good things he’s done here.

“But on balance, it is a very clear report card. He lied about raising taxes. He lied about creating jobs. He has failed as the governor. And he deserves to be kicked out on Nov. 4.”

Christie will be back on Monday.