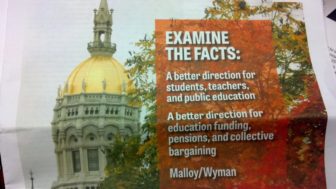 The cover of the CEA newsletter

Since their controversial endorsement of Gov. Dannel P. Malloy, leaders of the largest teachers’ union in Connecticut have portrayed the governor as the defender of what teachers worry about most: the future of their pensions.

But while touting Malloy as the first governor to “fully fund” the long-neglected pension system, the leadership message of the Connecticut Education Association doesn’t mention that Malloy had little choice but to do so. His hands effectively were tied by legal guarantees put in place by Gov. M. Jodi Rell and the 2007 legislature.

Critics charge that the CEA’s leadership has presented selected details to members to distort Malloy’s track record on pension benefits.

But CEA Executive Director Mark Waxenberg insists the leadership’s arguments are rooted in fact and that critics need to see the clear distinction between Malloy and his GOP challenger, Tom Foley.

Malloy is the “first governor in Connecticut’s history to annually fully fund teacher pensions during his first term in office and guarantee full funding in the future,” CEA leadership wrote in gubernatorial candidate comparisons posted on its “Examine The Facts” website and in the CEA Advisor, the union’s newsletter mailed its members.

Beginning last week and continuing this week, the CEA also is using regular regional forums to discuss the endorsement with rank-and-file teachers.

Each of the four budgets Malloy signed during his term does include the full pension contribution recommended by teachers’ pension analysts. Connecticut governors and legislatures have a history of contributing significantly less than the full amount.

That changed, though, in 2007, when lawmakers and Rell adopted a proposal from Treasurer Denise L. Nappier to borrow roughly $2 billion and deposit it into the cash-starved pension fund.

Connecticut promised in the bond covenant – its contract with investors who bought those bonds – to budget the full pension contribution required by analysts for the entire 25-year life of the bonds.

It did allow officials to reduce contributions if the pension fund’s fiscal health exceeded certain benchmarks – a condition never met since the bonds were issued.

Waxenberg initially suggested Malloy could have tried to contribute less than full funding by restructuring the bonds to remove the covenant language – an incredibly complex and expensive undertaking that still would not immediately have granted the governor the flexibility Waxenberg suggested.

This would have necessitated:

“Constitutionally, he’s not bound to do it,” Waxenberg said when asked again if Malloy – or any governor serving after the bond issue – could have approved anything but full funding. “But from all logical perspectives – failing bankruptcy in the state of Connecticut – yeah, I’ll agree with you.”

Mark Waxenberg, the executive director of the Connecticut Education Assoication.

Waxenberg added, though, that, “If you take that at face value, it still does not negate the fact that he’s the only governor in state history to fully fund. The statement is accurate.”

But another “Examine the Facts” handout from the union outlining the candidates stance on pensions also states in bold capital letters “DAN MALLOY PROTECTS YOUR PENSION.”

Albert Ciuffo, a middle school teacher from Stamford who attended last week’s CEA forum in Fairfield County, said “those people know better. They know that is not accurate.”

“This is the way they intend to turn out votes for Malloy, and it is unethical,” said Glastonbury teacher Martin Walsh, who is challenging CEA President Sheila Cohen.

Walsh, who attended four county meetings last week at which CEA leaders discussed the pension fund, said, “They never told us he (Malloy) didn’t have a choice.”

Given that, how did Malloy “guarantee full funding” of the teachers’ pension in the future?

Waxenberg said that assertion doesn’t refer to the bond covenant at all. Rather it stems from Malloy’s answers to a CEA questionnaire in which he pledged to preserve pension benefits for future teachers. Foley wouldn’t match that pledge.

The bond covenant does not preclude state officials from canceling future teachers’ rights to a pension, for example, and replacing that with a 401(k)-type benefit plan.

But Walsh said most teachers recognize the term “full funding” to refer to pension contributions that match analysts’ recommendations – as spelled out in the bond covenant – and not to the type of retirement benefit the state offers teachers.

He also noted that the pension bonds and the “full funding” rules that go with them are scheduled to be outstanding for another 18 years. No Connecticut governor has ever served more than 10 years.

The Malloy and Foley campaigns both declined to comment.

“It says nothing about this (pledge of Malloy’s) on the fact sheet,” Walsh added. “They are trying to convince people that Dan Malloy protected the pension fund.”

But Waxenberg said CEA leaders, taking a broader view, saw a clear choice between Malloy and Foley, and decided the former was the better choice.

It is Malloy’s controversial past, and not his position on the pension, that has some teachers up in arms now, Waxenberg said.

Malloy offended some teachers in 2012 when – while proposing controversial changes to tenure and collective bargaining rules – he said tenure could be won simply by showing up. The governor apologized for that comment during a candidate forum two months ago.

His administration’s handling of the rollout of teacher evaluations and the Common Core curriculum also have riled up some teachers.

“The emotionalism that’s out there among some members is such that you could have a person that just saved five people out of a burning building, and they’d say ‘give that person a bronze star,’” Waxenberg said. “But if his name was Malloy, they’d say ‘bring him to a cemetery and shoot him.’”