Ryan Boyko sat by an open rear window late Thursday afternoon, inches from the East Rock backyard he may not enter, continuing by laptop to try to help Liberia contain the Ebola epidemic. 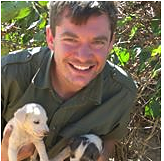 Boyko, a Yale public-health doctoral student, would rather have left the house. But he has been ordered quarantined by the administration of Gov. Dannel P. Malloy after officials feared he had contracted Ebola. So he endured another involuntary day Tuesday in what he described as a prison cell—his East Rock apartment.

It turned out Boyko didn’t have Ebola. He just had some diarrhea (“antibiotic-associated diarrhea,” according to the hospital) and a slight fever that went away. But he remains, in his view, a prisoner of misguided public policy.

As his “imprisonment” nears an end, Boyko has decided to go public with his outrage over how politicians are, in his view, overreacting to the crisis by quarantining people who pose no public-health risk.

“It’s frustrating,” he told the Independent in a conversation through the rear first-floor window. He sat inches away in front of an open laptop on his kitchen table and spoke through a window grill in order to comply with a mandatory order that he not have physical contact with people. Across the street an officer sat in a cruiser in a church parking lot, part of an around-the-clock police vigil. The phone rang continually during the interview, including one of the twice-daily calls he receives from New Haven’s public health department to confirm he still has no fever. (He asked not to have his photo taken at the house, fearing a parade of reporters showing up later.)

“What we really need to do is debate how to solve the epidemic in West Africa and prevent future epidemics,” Boyko said. “It’s maddening to hear this overreaction. We’re responding with fear. There’s no scientific justification to quarantine returning health-care workers.” The quarantines just dissuade more volunteers from traveling to West Africa to help contain the disease, he argued.

Boyko, who is 30 years old, is at Yale studying the epidemiology of microbial disease. He was part of a group invited to Monrovia, Liberia, “to help them with their contact-tracing system” to keep track of people who have had contact with Ebola patients.

Boyko arrived on Sept. 18. He worked out of a Ministry of Health and Social Welfare office, helping to build an IT system for data analysis. He worked on an Android app for use by community leaders in Monrovian neighborhoods, so they could transmit information each day on the number of people sick, people who died, people who return, and orphans who need services.

“I built the dashboard that the Ministry of Health could use to ID” people, he said. It was a meaningful trip for an idealistic student who seeks “to do applied work that helps people in need.”

He did not deal directly with Ebola patients in Liberia. At one point, he said, he was sitting at a table with colleagues when an NBC cameraman stopped by. He had no contact with the cameraman, who subsequently developed Ebola symptoms. Boyko said he did contact the Centers for Disease Control to report having seen the cameraman before he developed symptoms; he was told he was not in danger of having contracted the illness.

He flew home to the U.S. on Oct. 10. At first he was told to check in daily with a Yale Health Plan physician and report his temperature. “I thought that was fine,” he said. “I thought I could keep track of it myself. But it was reasonable.”

Then, four days later, on a Wednesday evening, Boyko informed the physician that he had a slight fever, in the “mid-99s.” Boyko also had some diarrhea, but it had now passed. The doctor asked him to take his temperature again: It had risen to 100.2.

Boyko said he knew that he didn’t have Ebola, that his symptoms weren’t consistent with the disease and that he hadn’t been in contact with the bodily fluids of anyone who had the disease. He also knew he was about to be sucked into the frenzy in the U.S. over the disease.

“Obviously there [was] a little tiny worry in the back of my head,” he said. But he was more “embarrassed” than scared—and concerned about the impact on his family. He called his mother in St. Louis to say “I was going to the hospital. It was going to be on the news. And I didn’t have Ebola.”

A police escort arrived to accompany his trip to Yale-New Haven Hospital. The officers “had masks and gloves. They stayed far away from me.” An American Medical Response ambulance worker in a full protective suit “came in and help me get into a suit.”

“They were very nice and professional,” Boyko said of the hospital staff. “All of them quickly decided that they didn’t think I had Ebola either.”

Outside the hospital, a media frenzy began. The governor rushed to the city. By day’s end, tests confirmed that Boyko did not have Ebola. But just to be safe, Malloy ordered him quarantined at home until 21 days had passed since leaving Liberia. The same order was given to another Yale student who’d been helping out in West Africa.

That student, confined to her home in Wooster Square, has not wished to be publicly identified. Boyko made a decision this week that he should speak out. A mutual friend connected him with Rachel Maddow, and he Skyped in to her MSNBC show Monday night, for the first time publicly identifying himself as the quarantined student. On the show he blasted governors for quarantining people like himself who pose no public risk. The Maddow segment was entitled “Fear-Driven Governors Make Ebola Policy Mess.”

Meanwhile, Boyko Tuesday was working at his kitchen table on a statement along with ACT UP activists calling for “a more sensible policy that is applicable nationwide.”

“There’s this patchwork of guidelines that’s ever-shifting, ever-changing,” driven by politics and hysteria rather than science or the public good, he said.

He was also communicating with people from Monrovia, continuing work remotely on the contact-tracing system.

As Boyko spoke in East Rock, the governor whose public-health commissioner ordered his quarantine happened to be in New Haven’s Fair Haven neighborhood campaigning for reelection. Gov. Malloy was asked about Boyko’s criticism.

“He voluntarily put himself in quarantine,” Malloy responded. “The 21-day period is not over. What should we have done differently? Put people in close contact with someone who has Ebola?”

Told of Malloy’s remarks, Boyko emailed the Independent a copy of the quarantine order.

“It says right on it, if I disobey the quarantine, it’s up to a $1,000 fine and one year in jail per each infraction. That was handed to me while I was still in the hospital. It’s voluntary the same way that paying for things that you’re taking out of the store is voluntary. I don’t know how else to respond to that. I have a police officer in a police car outside of my house right now. I have signed orders that tell me if I break quarantine I can face up to a year in jail.”

Plus, he added, “I’m asymptomatic. I had negative blood tests for Ebola.”

“I agree with the governor that if somebody has symptomatic Ebola, they should be isolated in the hospital and not allowed to have contact with the public,” he added. “I agree to that extent.”

Meanwhile, Boyko prepared, along with his colleagues, for their release from quarantine on Thursday.