Malloy tries to catch a favorable tide at Electric Boat 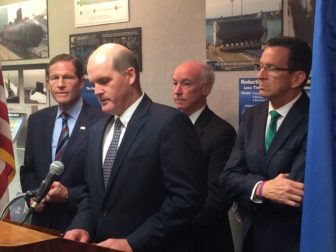 Groton – The politics of eastern Connecticut rise and fall with the economic tides on the Thames River, where Electric Boat has designed and built submarines for the U.S. Navy since the dawn of undersea warfare. And, lately, those tides have been rising.

Drug-maker Pfizer’s decision to move its research to Cambridge, Mass., was an economic setback to the region and a political blow to Malloy, a first-term Democrat whose re-election next week relies in large part on whether voters are finally feeling confidence in the recovery from the 2008 recession.

The political optics Wednesday were simple: Pfizer’s presence is diminished, but EB is here and hiring for jobs that pay an average of $90,000 annually in wages and benefits. EB employs 8,700, and it pledged to add at least 200 more.

These are good times on the Thames. EB has labor peace, courtesy of a five-year deal recently reached with the Metal Trades Council of New London County, and a Pentagon deal described as the richest ship-building contract ever.

In April, the Navy awarded the General Dynamics subsidiary a $17.6 billion contract for the continued construction and delivery of two $2 billion Virginia-class submarines a year, meeting the goal of the district’s congressman, U.S. Rep. Joe Courtney, D-2nd District.

Courtney, who unseated a Republican congressman by 83 votes in 2006, used to be called “Landslide Joe.” The congressman has new nicknames, courtesy of the Pentagon and EB.

Further up the Thames, the Mohegans have taken to calling him “Two Iron Fish,” a nod to his success in advocating for the fortunes of undersea warfare and Electric Boat. U.S. Sen. Richard Blumenthal introduced him Wednesday by the name bestowed on him by his Washington tribe: “Two Ships Joe.”

The congressman and the senator lent their presence to build up the event, and to make the case that Malloy has been good for business, despite what voters may be seeing on television, where round-the-clock ads portray the Connecticut economy as gasping.

In the 2012 midterm, when Malloy narrowly lost the 2nd District to Tom Foley, his Republican challenger next week, Two Ships won by more than 50,000 votes.

Courtney is a Red Sox fan, but the important box score in the 2nd District is found on EB’s web site, not ESPN’s. He says he checks it regularly to see how many jobs are posted. On Wednesday morning, there were more than 380 job openings.

“These are high-value, middle class jobs whose economic multiplier effect, as is verified every single day by economic analysts, is the best work for a region and a community,” Courtney said. He recalled that Defense Secretary Chuck Hagel recently called southern New England “the Silicon Valley of undersea warfare.”

“I think that is a description of what is happening in this region,” he said.

Malloy’s predecessor, Republican M. Jodi Rell, made a similar state investment involving Pfizer and EB. Her administration helped buy the former Pfizer headquarters across the river in New London, and it is now filled with submarine designers.

The only fallout has been traffic jams on Bank Street and complaints of scarce parking, problems mayors prefer to large empty complexes, Courtney said.

So, what of the politics? With a $17.6 billion contract in hand and the company already looking for 380 workers, did Electric Boat really need a $10 million forgivable loan to get going on a $31.5 million project?

Jim Geiger, the new CEO, says it did. The company spends tens of millions annually on its facilities, but there are limits to its resources, he said.

“This build out and this acquisition of this property would not have occurred without the support of the sate government,” Geiger said.

The nearby submarine base was targeted for closure in 1993 and 2005, but the Base Realignment and Closure commission overruled the Pentagon both times after heavy lobbying. One of the messages in 2005 was that Connecticut needed to better signal its support.

The Rell administration responded by providing $11 million for improvements to the base when the Pentagon agreed to spend $150 million. Now, the Malloy administration is spending $10 million.

“Connecticut’s commitment and investment, whether it’s at the sub base or here at Electric Boat, are absolutely pivotal,” Blumenthal said. “Even if it’s $10 million compared to $2 billion a ship – every one of them costs that much, and they are under budget and on time – it makes a critical difference that Connecticut has demonstrated its commitment, not only in words but in dollars.”

Correction: The original version of this story stated that Pfizer had left Groton. Though the company relocated researchers from Groton to Boston, the company maintains a major presence in Groton.