The only debate between the candidates for state treasurer devolved into a series of angry clashes Wednesday over the health of state pension funds and their respective ethics.

The half-hour debate, held at the studios of WVIT TV-30 in West Hartford and streamed live at NBCConnecticut.com, began 15 minutes late, and ended with both candidates pointing fingers as the final credits rolled.

“We’re not getting the job done. The proof is in the numbers,” said Herbst, who has attacked Nappier frequently for not speaking out against governors and legislatures whose actions have weakened the pension funds for state workers and teachers over the past 16 years.

Republican challenger Tim Herbst as he appeared on camera during the debate.

Both funds have assets worth significantly less than 80 percent of the value of their long-term obligations – the normal benchmark for a healthy pension program. These unfunded liabilities are “code language for future tax increases,” Herbst said.

He also argued that during Nappier’s tenure, investment returns – if adjusted for inflation – haven’t topped the 8 percent return, on average, that the pension funds assume will be achieved.

While most states assume pension fund investment returns of about 8 percent over a 25- or 30-year period, critics in financial services and academic circles have argued in recent years for more conservative targets. Moody’s Investors Service, a major Wall Street credit rating agency, proposed a new methodology two years ago that uses high-quality corporate bonds as its new guideline and suggests an investment return target closer to 5 percent.

But both of Connecticut’s pension funds suffered largely from decades of insufficient contributions ordered by governors and legislatures from the 1980s through 2010. And the assumptions about how much invested pension funds will earn are made by pension oversight panels, not by the treasurer.

“He wants to blame me for things I have nothing to do with,” Nappier said of Herbst. “Perhaps he thinks the voters will not know the difference. … The treasurer can only invest what she receives.”

Nappier added that the state worker and teacher pensions, under her tenure, have performed better than two-thirds of the public pension funds in the country. 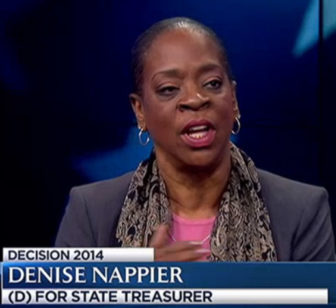 And the Hartford Democrat added that she “championed an ironclad commitment” that guarantees proper funding of the teachers’ pension fund for another two decades. Nappier was referring to her 2007 proposal to borrow $2 billion to bolster that pension and to pledge contractually to investors that Connecticut would not underfund the system for the 25-year life of that bond issuance.

The legislature and then-Gov. M. Jodi Rell approved that deal.

“No more can the state kick the can down the road,” she said.

Both Nappier and Herbst traded shots over their respective ethics.

Herbst repeated his earlier challenge for Nappier to disclose why her office invested pension funds years ago with a company implicated in the 1998 kickback scandal that landed her predecessor, Republican Paul Silvester of West Hartford, in prison.

“I was the one who had to come into that office and clean it up,” she said.

Nappier also would not back off assertions one of her campaign ads made that Herbst had used his position as first selectman to get his father a $600-per-day contract to serve as interim athletic director for the town.

Herbst, whose campaign sent a cease-and-desist letter to television stations directing them not to run the ad, said the school system gave his father the job.

“I had nothing to do with that,” he said, calling Nappier’s accusation “below the pale.”

Wednesday’s debate is available for viewing at WVIT TV-30’s website at NBCConnecticut.com.