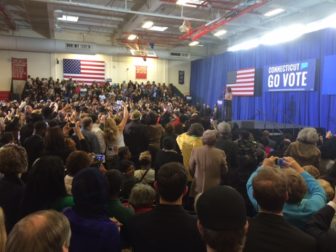 The purpose of Michelle Obama’s visit was writ large.

New Haven – Connecticut’s deadlocked race for governor drew First Lady Michelle Obama to a raucous rally Thursday in the city whose turnout next week probably will be the rock on which Gov. Dannel P. Malloy’s re-election founders or finds safe harbor.

“We’re in New Haven for a reason,” Malloy told a capacity crowd of 1,600 from a stage in the gym of Wilbur Cross High School, whose teams are nicknamed the Governors.  “If you want to know why I’m on this stage, it’s because people like you never stopped. You never gave up.”

The last votes for Malloy in 2010 may have been counted in Bridgeport, the scene of a chaotic Election Day, but more of them came from New Haven, the city whose voting lists were double-checked for days by Republicans astonished at the turnout that gave Malloy a narrow win.

“New Haven is the linchpin,” said U.S. Sen. Richard Blumenthal, a Democrat elected to his first term that same day, albeit by a comfortable margin.

Malloy, a first-term Democrat engaged in a rematch with Republican Tom Foley, only won 41 of the state’s 169 municipalities four years ago, magnifying the role of pulling votes in places like Bridgeport, Stamford, Norwalk, Hartford and, most importantly, New Haven.

“There is work that must be done,” Obama said.

The first lady knew the math. If 3,200 or so voters changed their minds, Foley could have won by a vote or two, Obama said. And that is only four voters in each Connecticut precinct.

“Take that in for a moment,” she said. “That is four voters per precinct, so if there is anybody here who’s thinking that their vote doesn’t matter, if there’s anybody here who knows someone who thinks that voting isn’t worth their time — you know, young people who sit on the couch —  I want you to think about those four votes.”

The closeness of the Malloy-Foley rematch is drawing the A-list of Democratic surrogates to the state’s cities: Bill Clinton already has been to New Haven and Hartford, and President Obama is going to Bridgeport on Sunday.

Mrs. Obama addressed the crowd, estimated by fire officials at 1,600 in the gym and 800 in an overflow room that the first lady briefly visited, like a Chicago precinct captain.

Her speech was practical prose, not poetry.

“Right now, here is what I need you to do,” she said. “I need you to make out a plan. When are you going to vote? Do you need a ride? Do you need babysitting? If you are young person, you have school. You have to make a plan. Stuff doesn’t just happen.”

Her message was writ large on a banner behind the stage: “GO VOTE.”

She smiled at a heckler demanding passage of a federal Dreamers Act, a law creating a path to citizenship for immigrants brought illegally to the U.S. as children. Outside, they held a banner that said, “Obama don’t deport my mama.”

“I’m going to wait and let you finish,” she told the heckler. “We have to turn this passion into work. Everyone I know has an issue dear to them.”

Obama said too many voters wrongly look to Washington for answers on issues dealing with schools, jobs, Dreamers or neighborhoods.

“So many of those decisions are made by your governor. Understand this. This is local politics. And more of us have to understand how it works,” she said. “And this is why you are here for Dan Malloy.” 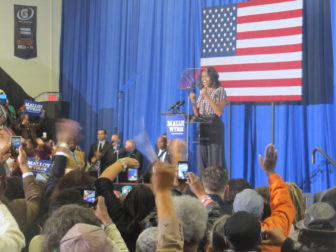 Her husband is headlining a Sunday afternoon rally at Bridgeport Central High School. In 2010, he spoke on the Saturday before the election in Bridgeport. He, too, was interrupted by hecklers. In 2010, the issue was U.S. support for the international fight against AIDS.

On Thursday, Obama and Malloy were reading from the same script: Votes matter, and elections have consequences.

Before the rally, Malloy announced a $21.5 million state investment in the second phase of Downtown Crossing, a $395 million mixed-use project under construction on and around a section of Route 34 that once bisected the city.

“It’s not about me. It’s not about Barack. It’s about you,” Obama said. Her closing words were blunt: “Thank you all. Get it done.” 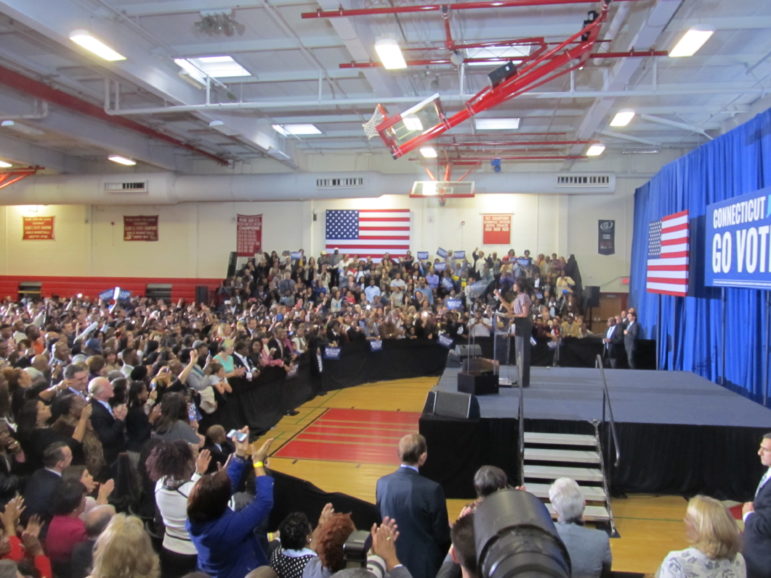