In an angry, unsettled season, Malloy stays the course

Even at 43 percent in the polls, Dannel P. Malloy says there’s little he would have done differently. And Connecticut shouldn’t expect him to change if he is re-elected Tuesday, even if 52 percent of voters do have an unfavorable opinion of him.

Connecticut’s 88th governor, its first Democrat to hold the office in 20 years, the man still alive in the face of god-awful polling, in a season of angry voters and ugly advertising, does not lack for confidence. He derides his opponent’s campaign as devoid of ideas, vague to the point of comedy.

It’s about not being Dan Malloy.

He insists that does not make this campaign different, more personal. Every campaign is personal. That’s politics. When pushed, he sounds a little like Hyman Roth in “Godfather II”. There is a little a shrug, a cock of the head. This is the business he’s chosen.

Malloy concedes a frustration that the campaign is not more about Republican Tom Foley, the man he beat in 2010, the man whose campaign is betting heavily that voters have a bad case of buyer’s remorse. Foley drives a car with a bumper sticker that says, “Don’t blame me. I voted for Tom Foley.”

Malloy has indulged in blaming the press a time or two for not being more aggressive with Foley. It’s a tendency he fights, not always successfully.

“It’s a frustration,” Malloy says. “You’ve brought that word up. But it’s a campaign. We wage a campaign.”

The polls are dismal, have been for years. But going into the last weekend of the campaign, Malloy and Foley are tied at 43 percent, with a petitioning candidate, Joe Visconti, at seven percent.

Malloy lasted 14 years as the mayor of Stamford, a city that woke up during his tenure and found ambition. One can argue that the city’s advantages, including a Metro-North tether to Manhattan, made Malloy. Or that Malloy took what he found and made more of it.

Either way, the city prospered from 1995 to 2009, when Malloy decided not to press his luck. His last mayoral election was close, a reminder that almost every mayor has a sell-by date, a tipping point. Eventually, unless you are a Tommy Menino, whose death Thursday is being mourned in Boston, the voters grow tired of their mayors.

If they turn him out on Tuesday, he will be the first Connecticut governor defeated since 1954, when Abe RIbicoff unseated John Lodge. Malloy already has one connection to that race. His 6,404-vote win over Foley in 2010 was Connecticut’s smallest margin of victory since Ribicoff’s.

Malloy says he is ready for whatever Tuesday brings, no regrets about any of it, not the huge tax increase he imposed, not the concessions he demanded of labor as he confronted an inherited deficit of $3.6 billion, the nation’s largest on a per-capita basis. 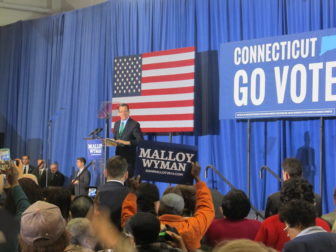 Malloy at a rally headlined by Michelle Oama.

Malloy maintained state aid. Over four years, he’s increased state spending on local education. No cops, firefighters or teachers are losing their jobs off his budget decisions. But he raised their taxes.

The New Jersey governor is a presence in the campaign.

As the chairman of the Republican Governors Association, he is the biggest player in a super PAC’s $7 million advertising campaign against Malloy. He is Foley’s only major campaign surrogate, a presidential contender who can draw reporters.

In 2010, the year Malloy was elected, Christie skipped a $3.1 billion pension payment to balance his $29 billion budget. He has since reneged on a promise to make $2.5 billion in other pension payments, prompting Wall Street to downgrade the Garden State’s bond rating a record eight times in Christie’s tenure. Christie cut local aid in 2010, his first year in office, and has since frozen it, an effective cut of 4 percent in the face of inflation.

Malloy insists he is happy to be the anti-Christie, even if Christie is weighing a run for president and Malloy is living a Seinfeld episode.

Malloy doesn’t often talk about polls, but he reads them. He loves data and metrics and can summon numbers at will, despite a lifelong battle with dyslexia. He reminds reporters of things they wrote months earlier, things that the reporters sometimes forget. Malloy never forgets. He knows his numbers, and he reminds they are not all bad.

“Polls, I normally don’t comment on them, as you know. But there are some other signs in those polls,” Malloy says. “People trust me.”

They think he is a strong leader. He gets credit for being a steady presence during a string of devastating storms and in the aftermath of the school massacre in Newtown. And everyone at the Capitol, even the Republicans, acknowledges Malloy’s work ethic, if they tire of hearing about it.

Malloy is Irish-Catholic, a proud double Eagle as a graduate of Boston College and its law school. But there is a Calvinist lurking somewhere deep in his genes. He cannot help but convey the impression that he believes he works harder and longer. There is the gentle scoffing at a young reporter’s fatigue on a day of trailing the governor from six in the morning to six at night. There are the one-liners about his love of Leap Year, when he has an extra day to work.

He lost weight after Newtown, his face becoming noticeably thinner. But he insisted it was the result of a renewed commitment to exercise, a regimen of morning sit-ups, push-ups and a precise run/walk on the same route. It clears the head. It’s what passes for relaxation.

When his campaign insisted on downtime after winning the primary in 2010, Malloy headed to the supermarket, not the beach. He cooked and barbecued and froze food like some crazed squirrel gathering acorns in advance of winter.

“This all relates to who I am and how I’m wired. Right? We’re only on this earth a limited period of time,” Malloy says. “My mother told me that. And she also said you have to spend every day trying to make the world a better place for your having lived in it. You don’t do that by taking shortcuts. And you don’t do that by running for office to be popular. You run for office to do the job.”

The governor says he is at peace.

“You understand, I’m not an unhappy person,” Malloy says. “I’m prepared for whatever happens.”

Malloy is doing everything he can to win, taking advantage of the powers of incumbency, the ability to make discretionary grants, to capitalize on the contacts made over the past four years. Bill Clinton’s been here twice to campaign for him. Michelle Obama was here Thursday. And President Obama is coming Sunday.

His friends say he is the luckiest unlucky candidate standing for re-election. He took office in bad fiscal times, but he’s still standing the weekend before the election, still tied with an opponent who reminds voters every single day that he’s not Dan Malloy.