Bridgeport – On a day of cold rain and hot rhetoric, a new poll and a bit of trash talk, the campaigns of Gov. Dannel P. Malloy and Tom Foley intersected Saturday in Connecticut’s largest city, where the final votes were counted in 2010.

The first-term Democrat and his Republican challenger each rallied supporters before crossing paths downtown at an NAACP luncheon, where Malloy won strong applause at each mention of common victories: a higher minimum wage, a law mandating paid sick days and strong gun controls.

Foley said urban policy would be a major priority of a Foley administration. He acknowledged Mayor Bill Finch, a Democrat who shared a table with Malloy.

“I look forward to working with you, Mayor Finch,” Foley said. “The future of Connecticut is not better than the future of our cities.”

President Obama is coming to the city Sunday afternoon for a rally with Malloy at Bridgeport Central High School.

Before and after the luncheon, both candidates rallied their supporters in Bridgeport, keeping them focused on the importance of turning out their votes on Tuesday, when the weather is forecast to be clear and dry. Foley’s campaign is using a bus that serves as a moving billboard.

Foley, the Republican who lost by a half-point four years ago under the weight of a Democratic landslide in the cities, offered coffee and pastry to a racially mixed audience of disaffected Democrats at Vazzy’s, a restaurant and catering hall.

William Washington, an African-American man who arrived on crutches, rose unsteadily to announce that he would vote Tuesday for Foley, the first time he has so favored a Republican. The audience cheered.

Charlie Coviello, a Democratic Town Committee member who says he ran a get-out-the-vote operation in the East End for Malloy four years ago, stood nearby with a T-shirt he had made. On the front, it read: “This DEMOCRAT is VOTING Tom FOLEY for GOVERNOR.” 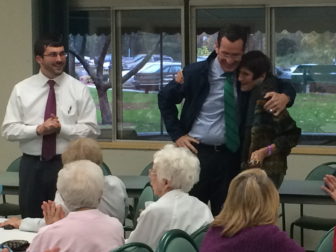 Coviello said Malloy did not adequately deliver on promises to boost business for minority contractors.

Others wore shirts saying that they are members of the “CT Black and Hispanic Think Tank” supporting Foley. One young man wearing a think-tank shirt said the group was an outgrowth of Foley’s campaign.

Foley, who says his internal polling showed him Thursday with a 3½ point lead, told the crowd at Vazzy’s he expected to win by four or five points, calling it a mandate for change after a season of neck-and-neck polls.

In a press advisory, his communication director did the political equivalent of pointing his bat at center field and calling a home run. He announced that Foley would hold a press conference Wednesday morning, something only the victor would do.

Later, after campaigning with U.S. Rep. Rosas DeLauro in East Haven, a town he narrowly carried in 2010, the governor just smiled and suggested that reporters check the latest public poll, a survey released Saturday by Public Policy Polling.

It has Malloy up by three points. 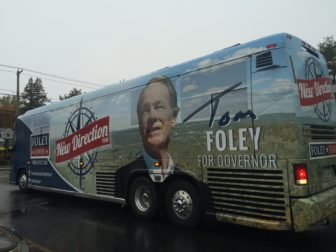 Foley’s supporters are taking the bus.

What do his internals say?

He mentioned that Public Policy Polling was just out with a new poll.

“You know that, right?” Malloy said. “Before you write your story, you should look that up, OK?”

The PPP poll was conducted Oct. 30 to Nov. 1 by automated phone calling and an Internet survey.

Malloy likes the PPP poll, but he urged Republicans to believe Foley’s internals. In fact, he said, with an expected GOP victory of five points, Foley’s in great shape. There’s no need for them to vote at all.

Comparing the Polls
PPP has Malloy by three. He was up by eight in their previous poll.