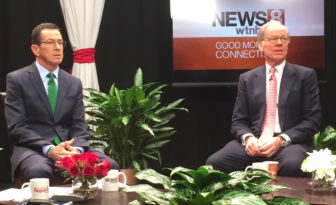 But talk of taxes took a back seat to the artists Jean-Auguste Ingres and Henri Matisse and their fondness for painting nudes titled, “Odalisque,” the name given to Turkish sex slaves and Foley’s yacht. Odalisque provided an entertaining diversion for early-rising TV viewers.

The two candidates met at WTNH, Channel 8 for a live one-hour forum, their last before voters go to the polls Tuesday to once again choose between Malloy and Foley, the nominees in 2010. Petitioning candidate Joe Visconti, who was not invited, quit the race after the debate Sunday and endorsed Foley.

Foley, 62, a Greenwich businessman who predicts he will win by a solid margin, was the aggressor in the show’s opening minutes, repeatedly pressing the Democratic incumbent to endorse or repudiate Foley’s late surprise: a tax cut for retirees.

Malloy, 59, a former Stamford mayor, painted Foley’s pitch as borne of desperation, a late appeal to teachers and retirees that the governor said was a tacit acknowledgement Foley trails in the polls, a reference to a survey released Saturday showing Malloy with a three-point lead.

“The governor likes to say, ‘Let me be very clear.’ I will be very clear: I will eliminate the state income tax on Social Security benefits and teachers benefits,” Foley said. He repeatedly pressed Malloy to make the same pledge, with a yes or a no.

Malloy referred to his own proposal, now law: A 50-percent tax exemption on teacher pensions phased in over the next three years.

“Let’s try to contain ourselves for a moment,” Malloy said.

After the forum, Foley said he was unaware of the teacher pension law or that he had accused Malloy of grandstanding for the teacher vote when he proposed it.

“I don’t remember making that statement,” Foley said. Pressed, he conceded, “I might have said he was doing it for political reasons just to appeal to teachers. I’m doing it for fairness reasons.”

Malloy said Foley’s proposal and his post-forum remarks were curious.

“You all know I’m the person who proposed the teachers,” Malloy told reporters. “You all know that. Apparently, he doesn’t read papers, or he doesn’t admit to the truth. So, he was saying things today he’s never said before, because he’s seeing what I’m seeing. He’s losing.”

The two candidates had sat side by side for what Mark Davis, the WTNH host and political reporter, called a 60-minute roundtable chat, not a debate. Susan Haigh of the Associated Press joined Davis and viewers in posing questions.

But it was a viewer, Charles Taylor of Essex, who caught the candidates by surprise: In a question relayed by Davis, Taylor noted that Malloy owned a boat named for a gemstone, “Sapphire,” while Foley owns a boat named “Odalisque,” for “a female sex slave or concubine.”

Odalisque, by the painter Jean-Auguste Ingres.

How did the candidates choose those names? If they didn’t, why keep them?

“I don’t have a boat any more,” Malloy said. “I did have a boat that had the name Sapphire. It was born with that name. And it costs money to change the name, to scrape the stuff off, and I wasn’t about to do that.”

Malloy hastened to add, “If I had a boat named after a sex slave, I would have changed the name.”

The governor appeared to think, however, Foley’s boat did have another name: “Five Million Dollar Yacht.” It’s how he repeatedly referred to Foley’s vessel, which has starred in Democratic political ads this season, as has Foley’s $10 million home and $1 million jet.

Davis asked Malloy if there was anything wrong with owning a yacht, especially in a state dotted with boatyards. Malloy pivoted to Foley’s disclosure of federal tax returns showing he paid no federal income taxes in recent years.

“The governor is obviously not going for the boat owners’ vote,” Foley said.

“It may have been repossessed,” Foley said of Malloy’s boat, a reference to reports during the 2010 race that Malloy had run up a bill on the boat’s storage in a Stamford boat yard before he gave up ownership. “At least I pay my bills.”

Foley said “Odalisque” was inspired by art, not sex.

“I’m a great enjoyer of the arts and culture, and Odalisque are the names of many great paintings, including the masterwork by Ingres,” Foley said. “It was named for that.”

“No, I think it’s a very nice name,” Foley replied. “Boats usually have a female name associated with them….Odalisque really means a beautiful woman, a beautiful thing in the art world. It doesn’t mean a sex slave.”

Malloy, who was quizzed by Foley on retiree taxes, wasn’t ready to let the subject drop.

“Tom, you asked me a question. Let me ask you one: You have a daughter. You think it’s appropriate to name a boat after a sex slave?”

Foley replied it was appropriate to name a boat after “something artists like Matisse admired greatly.”

Haigh noted that neither candidate was especially popular as measured by recent polls. She gave them an opportunity to tell voters something personal that might make them relate better.

Foley said he works on his own furnace and central air-conditioning. He also flies jets.

“I love fixing things, so I work on cars and motorcycles,” Foley said. “My wife, Leslie, if she can’t find me in the house,  she knows I’m probably downstairs working on the furnace or the air-conditioning system.”

Malloy talked about growing up with severe learning disabilities, including dyslexia.

“I couldn’t button a shirt or tie a shoe until I was in fifth grade. I think that explains some of the edges around my personality,” said Malloy, who got through law school listening to books recorded for the blind. “It was tough growing up that way. I had the support of my mother and my dad, but my mother most particularly.”

Malloy, who was allowed to take the essay portion of the bar exam orally, said he still has trouble writing.

“I’ve been accused, rightfully, of having sharp elbows,” Malloy said, “but part of it relates to what I grew up with and had to overcome.”