The two polls that will remain open are at Batchelder School, 757 New Britain Ave., and the United Methodist Church, 571 Farmington Ave.

“I believe a half hour is sufficient time,” Judge Carl Schuman ruled. “People fought and died for the right to vote. It ought not be denied.”

Blaming staff reductions, the Hartford registrar of voters’ office failed to deliver voting lists to affected polling places by the time they were to open at 6 a.m.

The Malloy campaign’s complaint alleged that at least 12 precincts failed to open on time and that voters in at least nine of the city’s 24 precincts were turned away for between 30 and 90 minutes.

The judge heard testimony from observers for both political parties who had been at Hartford polls early Tuesday morning.

“A number of people expressed frustration and left…They had to work,” testified Rick Adler, an attorney who observed 20 to 30 people leaving Batchelder School. Several told him they would not be able to return, he said.

Observers for the Republicans said they had been to several Hartford polling places that had had no problems.

Herb Shephardson, the attorney for Foley, told the court that the testimony offered was nothing more than a patchwork of hearsay.

But the judge said that he had heard direct testimony from witnesses who saw people being turned away at the two polls he ordered to stay open. He said he would not keep the other 12 polling locations open.

The judge expressed frustration with the situation. “This problem is intolerable,” he said.

“We have to abide by what the judge has ruled,” Foley communications director Mark McNulty said after the decision, adding that it is important that everyone be given an opportunity to vote. But, he added, “These type of snafus end up undermining confidence” in the election process.

The Malloy complaint blamed local officials for failing to provide the voter lists on time, saying state law requires each poll to have its voting materials by 8 p.m. on the eve of the election.

Malloy, who lives in the Executive Residence in the city’s West End and votes at the Hartford Seminary, was among the early-rising voters told they couldn’t vote. He arrived at 7:10 a.m. and waited a half hour before the lists arrived and he could cast a ballot.

Secretary of the State Denise Merrill, who also lives in the West End, arrived at 6:15 a.m. at the same polling place and learned her day would be complicated. Malloy and Merrill are both on the ballot, seeking re-election to second terms.

Olga Vazquez, the Democratic registrar of voters, blamed the delay on staff reductions and budget cuts that left her without sufficient staff to prepare the lists by manually checking off the names of 2,000 voters who already had voted by absentee ballot.

“It’s easy to point fingers of what went wrong, but we need to understand that when you cut budgets, and we are dealing with so much in a governor’s race, we are going to have challenges,” Vazquez said.

She said her staff of six is less than half what it was in the last mid-term election. “It’s no comparison for a city of 65,000 voters,” she said. “We don’t have the manpower.”

Party officials originally blamed the delay on a printing failure.

By mid-morning, every polling place in Hartford was open and equipped with the proper lists, said Urania Petit, the registrar for the Working Families Party.

During the last election, Malloy won 15,753 votes in Hartford compared to the 2,043 votes won by Foley. Voter turnout was 39 percent, said Vazquez. 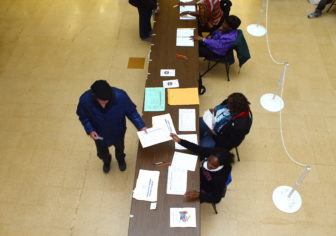 A voter at Hartford Public Library gets his ballot. This was one of several locations that had a delay in getting the voter list.

Av Harris, a spokesman for Merrill, said Tuesday evening that the secretary of the state’s office would file a complaint against the Hartford registrars with the State Elections Enforcement Commission, which he said has wide investigative powers over election matters.

Ted Bromley, an attorney for the secretary of the state’s office, notified the commission by e-mail that it intended to complain about the “gross misconduct” of the registrars, citing a number of election law violations related to the preparation of the registry list and the opening of the polls.

Earlier in the day, Harris had said, “This will be investigated, and there will be consequences for those responsible.”

“This is absolutely unacceptable,” he said.

Four years ago, a judge extended voting hours in Bridgeport after the city ran out out of ballots, leaving voters unable to vote for hours.

This year, Merrill said, registrars ordered enough ballots to accommodate a 100-percent turnout, while actual turnout is expected to be around 55 percent.

“She voted by affidavit,” said Harris. The process is cumbersome, requiring the voter to write out their votes by hand and sign the affidavit in the presence of voting officials.