Ted Kennedy Jr. celebrates his victory in the State Senate 12th District. He was supported by former U.S. Sen. Chris Dodd, far right, who was a friend of Kennedy’s late father.  Kennedy’s win was one of at least 19 Democratic victories in state senate races.

Connecticut Democrats maintained their majority in the state Senate in Tuesday’s elections, winning 21 of 36 seats. House Democrats had a net loss of 10 seats, trimming their majority to 87 to 64.

Senate Republicans had hoped to win control of the chamber for the first time since 1996, but that dream quickly vanished Tuesday with victories in only 15 races.

With Democratic Gov. Dannel P. Malloy the winner in the gubernatorial election, it matters little that the Senate Democrats do not hold a veto-proof majority, since the legislature never attempted override Malloy during his first term in office. However, with Democrats losing the seat held by Sen. Andrea Stillman of Waterford, the party no longer has the 22 votes needed to increase the constitutional spending cap.

In the Connecticut House of Representatives, Democrats held onto their majority, as expected. However, Republicans managed to gain 10 seats, bringing the chamber’s makeup to 87 Democrats and 64 Republicans. 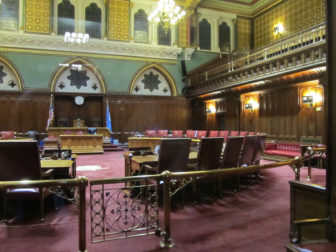 The 64 House votes are the most votes House Republicans will have had since 1994.

There were 36 seats in the House and Senate that faced no opponent in the general election and another 13 seats where the candidate faced no major party opposition.

Here are some highlights: