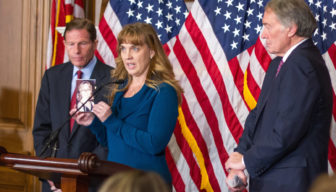 Washington – Are drivers in Connecticut safe from the chance the airbags in their cars may kill or maim them?

That was one question raised during a heated Senate hearing Thursday on the safety of airbags made by the Japanese company Takata.  The inflator on these airbags can break apart, spraying metal shards that have killed at least five drivers or their passengers and blinded and maimed others.

The devices were installed in more than 30 million vehicles made by Honda, Chrysler, BMW and eight other automakers.

Takata maintains the airbags are likely to malfunction only in states with hot, humid temperatures; and automakers have limited recalls mainly to Florida, Hawaii, the U.S. Virgin Island and Puerto Rico, although Honda has expanded them to other states.

“It is hard for me to answer yes or no,” Shimizu said.

An angry Markey responded, “It is not hard for you to answer yes or no.”

When Shimizu continued to evade the question, the senator said, “I’m going to take that as a no.” 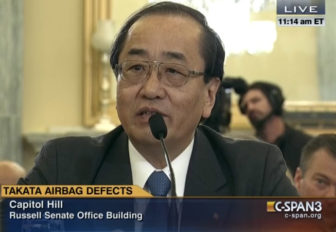 Takata Senior Vice President Hiroshi Shimizu as he appeared on a C-Span broadcast of the hearing.

Before the hearing, Markey and Sen. Richard Blumenthal, D-Conn, who is also a member of the commerce panel, held a news conference to introduce Kim Kopf, whose sister was a passenger in a Subaru Impreza that crashed in 2003 in Arizona. She died of head injuries sustained when her air bag exploded.

The death of Charlene Weaver, 24, could potentially push back the date that defective airbags were believed to have been first installed in cars. They currently are considered to have been defective since 2004.

Kopf said the car with the airbag that killed her sister has yet to be recalled for airbag-related reasons, although similar models in humid states have been placed on the recall list.

At the press conference, Blumenthal called the Takata airbag “a ticking time bomb” and blamed NHTSA for ignoring the problem for too long.

“There ought to be loaners for every car owner that needs repair,” he said.

He and Markey have urged the Justice Department to launch a criminal investigation of Takata after reports surfaced that in 2004 the company destroyed airbags because data from test results had raised red flags for engineers.

At the hearing, Blumenthal pointed to posters on an easel that detailed U.S. safety standards and asked Shimizu if his company applied those standards in manufacturing its airbags.

“I’m not familiar with this, but I’m sure someone in my company knows about this,” Shimizu said.

“Your company concealed facts that otherwise would have been known to the public,” Blumenthal said.

Schostek replied, “We do not intend to hide behind settlements.”

Representatives from Chrysler and NHTSA were also among the witnesses. The committee also heard from a 29-year-old woman who was struck by shrapnel in the eye and in her leg in a collision last year.

Blumenthal said he would ask the U.S. Department of Transportation to force Takata to speed up production of replacement airbags. He asked Schostek if he is willing to allow Honda to install airbags made by other manufacturers in vehicles with defective Takata airbags.

“All options are on the table,” Schostek responded.

The two-hour hearing offered a rare moment of bipartisanship on Capitol Hill. Both Democrats and Republicans were outraged at the airbag scandal and supported each other on the issue.

Sen. Dean Heller, a Republican from Nevada, asked Shimizu and Schostek if his daughter was safe driving a used Honda with Takata airbags. The senator was frustrated by the lack of responses to his question.

“You better tell your daughter not to drive south in her Honda,” quipped Sen. Bill Nelson, D-Fla.