Obama actions to help only some Connecticut immigrants stay 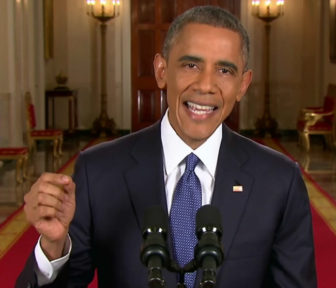 Washington – President Obama’s controversial move to stop the deportation of millions of immigrants will help thousands of undocumented people living and working in Connecticut, but bypasses thousands of others.

The president said his use of executive action to change immigration regulations would help as many as 5 million migrants. The number that would be helped in Connecticut is difficult to determine.

Connecticut has a diverse immigrant community with peoples from South America, Mexico, Central America, the Caribbean, Asia, Europe and Africa. Many are here legally, but an estimated 55,000 to 100,000 are undocumented.

Of those undocumented, the largest group that will be helped belong to “mixed families,” where some members are citizens or legal residents and others are not.

In an address to the nation Thursday night, Obama laid out a plan that would allow the parents of children who are U.S. citizens or residents to apply for a new program that would defer their deportation for three years at a time. Applicants must have passed criminal background checks, have been in the United States for at least five years, and have paid their share of taxes 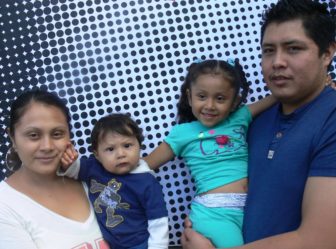 Jose Luis Piscil, an undocumented worker from New Haven, with his family.

That would help people like Jose Luis Piscil, 26, an undocumented worker from Mexico who lives in New Haven and is in the midst of deportation proceedings.

Piscil’s wife Yuliliama is also undocumented, but their two young children, 2-year-old Marta and 5-year-old Luis, were born in the United States and are U.S. citizens. The Piscil’s have lived in the United States for 10 years and have no criminal record, so they are likely candidates for the new deferral program.

Piscil said he feels good about what the president has done. “But many parents will continue to suffer,” he said. “So will people without children. The best thing is that everyone is treated equally.”

The president has used his executive authority to change immigration rules before. In 2012, he issued a memorandum called Deferred Action for Childhood Arrivals, or DACA. It directed the U.S. Immigration and Customs Enforcement (ICE) agency and other federal agencies involved in the apprehension and deportation of the undocumented to practice “prosecutorial discretion” toward those who immigrated to the United States as children and were in the country without legal status.

Obama moved Thursday to expand those eligible for DACA so that individuals who were brought to this country as children can apply if they entered before January 1, 2010, regardless of how old they are today. And now DACA relief, which is renewable, will also be granted for three years at a time, instead of two.

But the president disappointed many immigrants by not extending deferred action to the parents of those who have won temporary legal standing under DACA. Many of those young people had been politically active and known as “Dreamers” because they said they were trying to pursue “the American Dream.”

Carolina Bortolleto of Danbury is a Connecticut Dreamer whose family emigrated from Brazil. While she and her sister have provisional legal status, her parents do not and won’t be helped by the president’s executive order.

“We’re happy for those people it will help, but we’re disappointed that a lot of parents, including my parents, will be left out,” she said.

It’s especially a bitter pill because the Dreamers latest campaign was to get help for their parents. Bortolleto was one of four Dreamers who spoke up during First Lady Michelle Obama’s pre-election visit to Connecticut, demanding swift action on immigration.

The president said he is using his authority to change immigration regulations because Congress has failed to approve a comprehensive immigration bill; and immigrant groups, especially Latinos and Asians, are angered over the record number of Obama administration deportations, which reached 2 million in October.

Obama said his actions are practical and overdue – and his relief to immigrants is coupled with tougher border enforcement efforts.

“Mass amnesty would be unfair. Mass deportation would be both impossible and contrary to our character,” the president said. “What I’m describing is accountability – a common sense, middle-ground approach: If you meet the criteria, you can come out of the shadows and get right with the law. If you’re a criminal, you’ll be deported. If you plan to enter the U.S. illegally, your chances of getting caught and sent back just went up.”

The president also took steps to allow high-tech immigrant workers to move or change jobs more easily and to give their spouses work authorization. 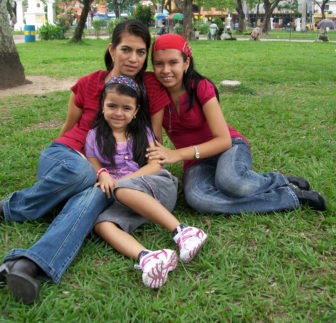 Gladys Edith Jimenez Vasquez, Jesslyn Jimenez, and Suidy Jimenez a few years ago in one of the last pictures of the three together.

Not every migrant’s hopes were fulfilled  by Thursday’s action.

Suidy Jimenez’s mother, Gladys, was deported the day before Obama gave his speech. The West Haven high school senior and her 11-year old sister, Jesslyn, have experienced the separations and anxieties common to many “mixed” families.

Suidy, 18, and Jesslyn were both born in Connecticut and are U.S. citizens. But Gladys Jimenez is an immigrant from Guatemala, first deported in 2005. At that time, Jesslyn was only 10 months old, so the daughters went back to Guatemala with Gladys. The girls’ father, who was able to obtain legal status a few years ago, was working three jobs in West Haven and could not care for them, Suidy Jimenez said.

Since then, the girls have traveled back and forth between the United States and Guatemala, which was becoming increasingly violent, while their mother sought to obtain legal status.

Gladys Jimenez was denied the right to return to the United States about six months ago. Having not lived with her daughters for about four years, she decided to cross the Rio Grande without authorization to make her way back to Connecticut; but she was detained by federal immigration officials. After six months in a detention facility in Houston, Gladys Jimenez was returned to Guatemala on Wednesday.

“It’s not easy living without a parent to help you make choices,” Suidy Jimenez said. She hopes there’s now a way for her mother to rejoin the family. “We want to have what every person has – a family that lives together,” she said.

Codognolla was born in Minas Gerais, Brazil. His family came to the United States in 2000 when he was 9.

He benefited from Obama’s 2012 decision to use his executive power to halt the deportation of undocumented youths and grant them provisional legal status. That allowed Codognolla to graduate with a political science degree from the University of Connecticut in Stamford and get a job as a paralegal in an immigration attorney’s office.

After more than 14 years living in Connecticut as undocumented aliens, Codognolla’s parents were able to win legal status in August through the sponsorship of their employers.

But Lucas Codognolla knows other Dreamers will not be as lucky and that the president has not done anything to help the situation of their parents.

“But I wouldn’t blame the president. I blame politics in general because we have been using immigration as a political football,” he said.

Codognolla hopes the president’s policy changes “serve as a catalyst for something bigger to happen.”

“There are clients who are likely to be affected who I’ve reached out to and told them ‘we have to speak after the president’s speech’,” Penn said.

Besides helping families with mixed legal status, Penn said immigration lawyers like him will be moving to help those in mixed families, those who have “aged out” of DACA and other immigrants who would now be eligible for relief.

“It’s going to change things,” Penn said. “The important thing is getting the word out and convincing people to contact attorneys,” he said.

“…I commend President Obama for using his executive authority to do what he can to alleviate this problem – just as numerous presidents before him have done,” Malloy said. “Immigration is a federal issue. But in Connecticut, we’ve done what we can to respect our values as a nation of immigrants, including providing in-state tuition for children who have lived in Connecticut for most of their lives and have attended and graduated from Connecticut schools.”

Connecticut’s congressional delegation, all Democrats, support Obama’s new policy too. They echoed the president by saying action is needed because, while the Democratic-controlled Senate approved a comprehensive immigration bill in 2013, the GOP-controlled House failed to act on the issue.

“President Obama is using his well-established legal powers to reform a sadly-broken, inhumane immigration enforcement system,” said Sen. Richard Blumenthal, D-Conn. “Just as presidents have done since Dwight Eisenhower, he is taking a profoundly important step under his existing legal authority, because Congress has failed to implement the comprehensive reform passed 511 days ago by a strong bipartisan majority of the Senate.”

Rep. Joe Courtney, D-2nd District, said, “The president’s temporary executive order adheres to past precedent regarding immigration, and should act as a spur to congressional action – not further obstruction.”

But Republicans in Congress are furious, and some have threatened to impeach the president and derail the budget process – which would result in a government shutdown in December.

House Majority Leader Kevin McCarthy, R-Calif., said, “It is our obligation and responsibility to fight this brazen power grab that doesn’t solve the real problems.”

“The president’s action is a prime example of Washington cynicism,” McCarthy said. “ He has responded to Congress and the public’s desire for positive change with an all-or-nothing approach that only damages the prospect of future cooperation. He did not even attempt to start on the right foot and work with us in the New Year.”

“Earlier this month, when voters went to the polls, they sent a strong message to Washington: the American people rejected President Obama’s agenda and want Washington to start working for them, not a go-it-alone president hell-bent on forcing his radical agenda via subterfuge,” Scalise said.