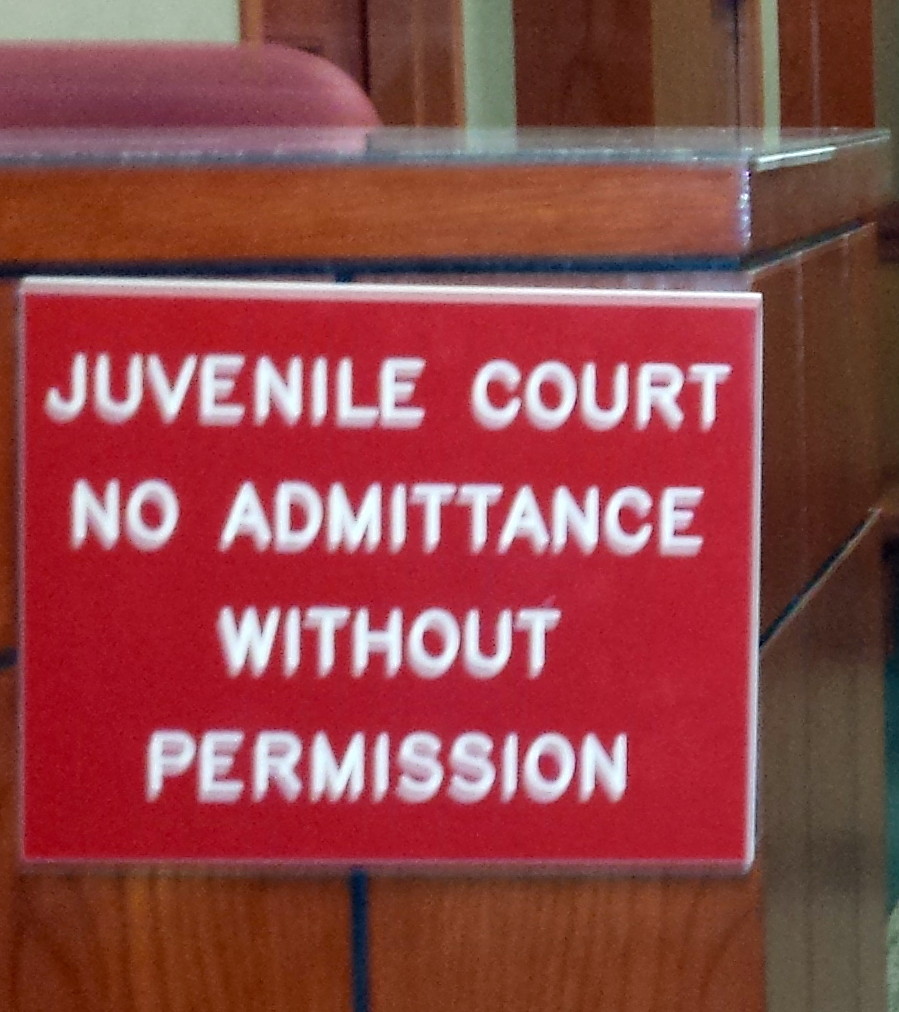 A sign greeting visitors to the juvenile court in New Britain.

Can a Connecticut court bar publication of a news story when information from a confidential juvenile court proceeding makes its way to the media?

That’s the question the Connecticut Supreme Court will answer after New Britain Superior Court Judge Stephen Frazzini last week ordered the Connecticut Law Tribune not to publish a story involving a child protection case before him.

The case in question involves three children who were removed from their parents’ custody and put into foster care eight months ago by the Connecticut Department of Children and Families, which investigates cases of child abuse and neglect.

While rare, it is not unheard of for cases in which DCF is involved to make their way into the news. But an order from a judge barring publication of a news story — known as a prior restraint — is rare and faces a high Constitutional bar. The U.S. government’s unsuccessful attempt in 1971 to halt publication of the Pentagon Papers, a secret defense department study of U.S. involvement in the Vietnam War, is one of the most oft-cited prior restraint cases.

Judge Frazzini held an open court hearing on Monday to reconsider his previous decision, which granted a request from the child’s mother to bar the Law Tribune from publishing. The Law Tribune has appealed that decision, and the state Supreme Court has decided to hear the case.

“I think it’s not in the children’s best interest for this story to be reported . . . These children have been through enough,” guardian ad litem Susan Cousineau told the judge. “These are confidential proceedings for a reason.”

Steven Dembo, the mother’s attorney, said he was “proud” of the judge’s ruling barring publication. Advocates for keeping the proceedings private said that making them public could prevent cases of abuse and neglect from being reported to authorities because of fear the public spotlight could harm vulnerable children.

But Dan Klau, an attorney for the Law Tribune, argued that ordering a publication not to print a story violates First Amendment rights.

“There is a compelling interest in confidentiality in juvenile proceedings, but that does not outweigh the First Amendment rights of the press to publish information freely,” Klau said.

The American Civil Liberties Union of Connecticut, two open-government organizations and more than a dozen media associations and individual news organizations, including The Connecticut Mirror, also objected to the prior restraint order Monday by filing a “friend of the court” brief with the Supreme Court. The brief argued that the state Constitution has an even stronger prohibition against prior restraint than the U.S. Constitution, and that abuses of free speech rights are subject to punishment after publication.

Frazzini ordered his ruling sealed last week, and it is not available to the public. But in court Monday the judge, citing several U.S. Supreme Court cases on prior restraint, said he understood there was a “heavy burden to overcome before it is permissible to restrain publication.”

“The court is going to take this under advisement, and then I will issue a written order,” said Frazzini, who has been a judge for more than 15 years.

Frazzini allowed reporters from the Law Tribune, the Mirror, the Associated Press, the Hartford Courant, and the Journal Inquirer into the courtroom to hear the arguments Monday, but did so after ordering them not to publish the names of the parents or children involved in the case.

A spokesman for DCF said the child welfare agency did not seek to prevent the Law Tribune from publishing its story.

State law makes confidential all records in cases where there are allegations that a child is uncared for, neglected or abused. But the judge acknowledged Monday that the Judicial Branch posted on its public website a petition filed on behalf of the father in the case before him.

That petition was the basis for the Tribune’s article, according to a story in the newspaper.

That petition has since been removed from the website, but only after The Journal Inquirer and The Washington Post had already republished the document. The document does not include the names of the children involved in the case but does include the father’s name.

Connecticut juvenile courts are not alone in holding their proceedings in private.

In Connecticut, judges and the DCF commissioner are given discretion over whether to release details of a case.

Gary Kleeblatt, the spokesman for DCF, said that the agency typically releases details on cases only when the agency’s credibility and accountability are in question.

“It doesn’t happen a lot, but when there are issues of the department’s accountability raised, [the commissioner] has been very careful not to provide any more information than necessary,” not speaking about a particular case but in more general terms, he said. “It’s about helping families, and you don’t help families by airing their embarrassing information.”

The secrecy of juvenile proceedings has drawn the attention of state lawmakers in recent years. In 2009 legislators created a pilot program to open some juvenile proceedings after some child advocates argued public oversight was desperately needed to improve shortcomings in the system.

The Center for Children’s Advocacy told legislators in 2009 that states that had opened their courts reported that, “Open courts enhanced professional accountability for the principal actors in the child protection system, increased media and public attention to child protection issues, and increased participation by the extended family, foster parents, and service providers in child protection proceedings.”

However, after the Connecticut pilot program “attracted little attention,” according to the panel overseeing it, the program ended shortly after it began.

With the media barred from juvenile proceedings, outside review is now limited to the state’s Child Advocate, a state watchdog agency with subpoena powers, and the federal Court Monitor, whose office gets to review the welfare of children in state custody.

Frazzini said he is not sure when he will issue his ruling. Regardless, the attorneys have agreed to a stay on whatever Frazzini decides until the Supreme Court rules.