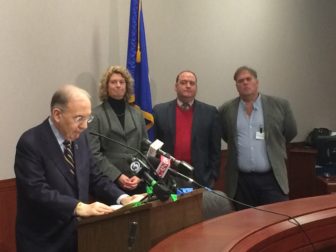 Stunning jumps in monthly electric rates as the Connecticut General Assembly convenes its 2015 session next month create a market opportunity for electric retailers and a political opportunity for those who would regulate them.

And CL&P’s average residential bill could jump again at mid-month by another $7.12 if a draft regulatory decision announced Monday is finalized without revisions in two weeks.

The big bump in rates is likely to make more consumers look at third-party electric retailers, prompting consumer advocates and a top legislative leader to issue a warning Tuesday against deceptive teaser rates.

Residential customers can currently save as much as $17 a month by switching from CL&P or UI to one of the many retailers who compete in Connecticut’s partially deregulated electric market.

But some of the retailers offer variable rates that can jump and quickly wipe out any savings if consumers do not closely monitor their rate, and some suppliers actually charge as much as $65 more than CL&P and UI.

“We caution folks if you are going to be considering an alternative electric supplier to make sure you are very educated about which supplier you are picking, the terms and conditions that you are agreeing to sign up for, and when your rate ends,” said Elin Swanson Katz, the state consumer counsel.

Katz joined Senate Majority Leader Martin Looney, D-New Haven, and leaders of two consumer groups, AARP and the Connecticut Citizen Action Group, in warning consumers to respond carefully to what they expect will be a heavy marketing effort by retailers after the rate hikes take effect.

Electric bill are based on two elements: the cost of generating electricity, and the cost of delivering it. Consumers pay for the generation based on usage, but delivery is a fixed cost. Essentially, every customer pays a fixed share of the cost of maintaining the delivery system, regardless of usage.

Electricity is a commodity that is purchased and delivered by CL&P and UI. They buy energy on the open market, passing generation costs on to consumers without further markup under what is known as the “standard offer.”

Third-party retailers also are free to buy electricity from suppliers and sell it to residential customers though CL&P and UI.  Based on the source of supply and contract terms, the retailers can sometimes beat the standard offers of CL&P and UI.

Generation costs have jumped throughout New England, driven primarily by the cost of natural gas. The fuel is plentiful nationally, but supplies in the region are constrained by limited pipelines – and Katz says that drives up cost.

In addition, under a draft decision released Monday by the Public Utilities Regulatory Authority, CL&P’s delivery cost also would jump again in January.

Looney, who will become the Senate’s top leader, president pro tem in January, said he was unsure if the legislature could offer any rate relief, given that market forces are driving the increases.

He joined the advocates in urging consumers to carefully shop if they consider a third-party retailer.

“In most instances, in a lot of instances, the risk far outweighs the reward,” said John Erlingheuser, the advocacy director for AARP in Connecticut.

AARP and the Connecticut Citizen Action Group intend to ask legislators to pass a ban on variable rates, something the legislature refused to include in a consumer protection bill passed last year.

Tom Swan, the executive director of CCAG, also urged consumers to object to the rate increase tentatively approved by PURA in the draft decision.

In an application on June 9, the Northeast Utilities subsidiary sought additional revenue of $231.6 million and a 10.2 percent return on equity.