Washington – Sen. Richard Blumenthal knocked major league sports leagues Thursday, saying the federal government has given them a “blank check,” and he promoted legislation that would pressure the leagues to end television blackouts of games. 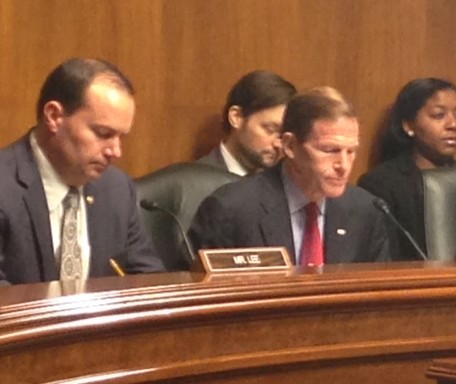 Sen. Richard Blumenthal, right, and Sen. Mike Lee of Utah at a Senate Judiciary Committee hearing Thursday on a bill that would discourage television blackouts of sports events.

Blumenthal’s FANS Act would  penalize professional sports leagues by removing their antitrust exemption if they black out local games.

He chaired a Senate Judiciary Committee hearing to promote his legislation, saying the antitrust exception allows sports leagues to “negotiate enormous broadcast agreements.” They have an obligation to make all their games viewable by the public, he said.

Blumenthal said his legislation would give sports leagues a choice. He conceded it’s not likely to move anytime soon.

“We’re obviously not going to pass this bill out of the Senate or Congress this year,” said Blumenthal, a Democrat who will lose his right to hold the gavel at Senate hearings when the GOP takes over the Senate in January.

But the senator, who sponsored the FANS Act with Sen. John McCain, R-Ariz., said “momentum is on our side,” and the bill would be introduced in the next Congress.

Sen. Mike Lee, R-Utah, who will chair the Judiciary Committee panel on antitrust issues in the next Congress, said he would “take a look at economic data” and consider other issues before weighing in on the FANS Act.

“But I’m certainly open to considering in the future whether the antitrust exemptions are justified,” Lee said.

Gerald Waldron, an attorney with the Washington, D.C., law firm Covington and Burling, which represents the NFL, said the FANS Act would topple a delicate arrangement that has allowed the NFL to broadcast every regular season and playoff football game over “free” broadcast television for 50 years.

If the leagues lost their antirust exemption, Waldron said, “The bill would create tremendous uncertainty about the ability of sports leagues to enter into nationwide broadcast arrangements and also would raise serious First Amendment issues by requiring sports leagues to provide broadcast content to cable and satellite companies during contract disputes,” Waldron said.

Waldron also said broadcasting all games would depress stadium ticket sales, hurting local businesses, and that the number of blackouts are at an all-time low.

Blumenthal countered that “the threat continues in Connecticut and across the country that games will be blacked out.”

Currently, the NFL blacks out games when home games are not sold out 72 hours before kickoff.

“If you worry about filling the stadium, why don’t you lower the ticket prices?” Blumenthal asked Waldron.

In September, the Federal Communications Commission voted unanimously to prohibit agreements between leagues and cable or satellite companies to carry a game when an over-the-air broadcast of that event is blacked out within the local broadcast area. They said economics drove the decision.

“For the National Football League, the only league for which the commission’s sports blackout rules continued to be relevant, ticket sales are no longer the primary source of revenue,” William Lake of the FCC testified at Blumenthal’s hearing. “The massive popularity of that sport means that the primary source of income for the NFL has shifted to television, with television revenues now the NFL’s main source of income, approaching $6 billion this year.”

McCain said the FCC’s actions are not enough because, although they have imposed new restrictions, it still allows blackouts on over-the-air stations.

“This is an issue that must be addressed by the league itself and, if the NFL fails to show leadership, then through congressional action,” McCain said.